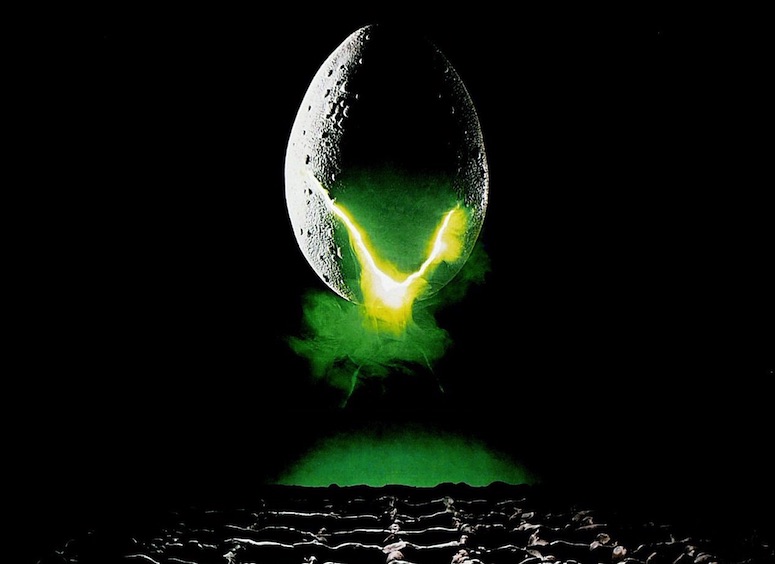 The “Alien” series is one of my favorites even though I have to admit the amount of good movies is majorly outnumbered by the bad ones.

This is one of the first horror series I could say I was a fan of and tracked down all of the films. Now in my house my dad had a rule we could (if we were 16+) could rent just about anything we wanted, but if it was a dark/gory movie we had to space it out. 2 horrors film in a row and we’d have to rent something like a comedy. This is also one of the few times I went behind his back to finish the series in one go. My mom at the time didn’t really care what we rented so when I went up to her place to visit for the weekend I rented “Alien 3” to complete the chain. Anyway, I’ll be going from best to worst for this one so let’s get started. As almost always SPOILERS! 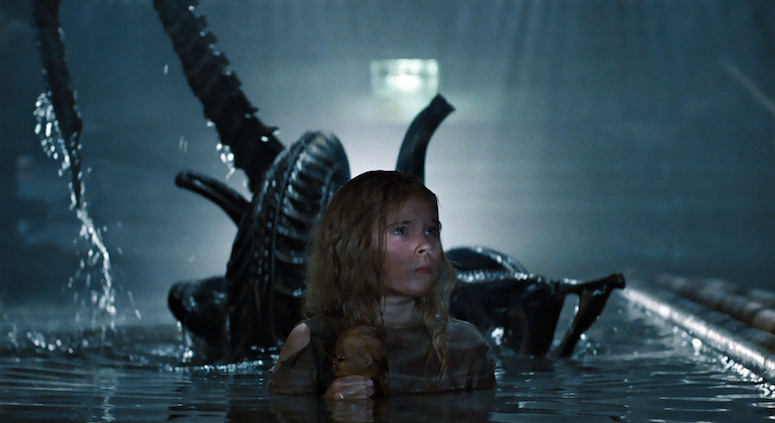 These types of movies are always difficult to discuss. It’s not only my favorite “Alien” film and a movie I’d put on my top 10 favorite films of all-time, but many other people feel the same. I’m not sure what I’ll have to say about the film that hasn’t been commented on to death. It is the definition of a great sequel. It expands the character and story, gave more of an explanation of what the xenomorphs were (plus their official name) while still keeping them scary and mysterious. Some may complain, but I always thought they did a good job showing just enough to keep the fear. For anyone who thinks having more xenomorphs makes them less scary remember yes it was easier to kill them individually, but even the film itself shows their greatest strength is in their numbers. Plus the Marines has state-of-the-art weapons, assuming you’re a family that owns guns your chances of surviving an onslaught of them is still going to be slim no matter what the NRA tries to tell you. Plus you just can’t beat the characters in this film. All are memorable and I care about every last one. We’re even introduced to my favorite character of the franchise, Bishop.

I first came across this film as a small child. We had a bunch of the toys from the Kenner line. One time my older brothers were watching it and I walked on the knife scene, I got scared and ran out. Now in my defense I was very young and didn’t understand what was going on. I just saw that someone was being held down and screaming as someone else threw a knife down over and over. Then, years later when I was still too young to be watching rated R films I walked in on my brothers watching it again. This time they were with my dad, I had gone in to ask about something and casually looked over at the TV. I saw a man, woman and child standing around and all the sudden the man starting violent vomiting milk and a sharp tail burst through his chest. He was hoisted up where a giant monster ripped him in a half! Needless to say this was one of the most terrifying images 10 year old me had seen. My dad had an interesting reaction. He made me continue watching. After all these years I think his reasoning was that can’t be the last thing I see before going on with my life, I needed closure, I needed to this thing die. So even though I was terrified he kept me in the room to watch the rest of the film. Honestly, that did help and I wasn’t as scared by what I had seen as I otherwise would have been. You have to remember at this time in my life I was still being scared by movies like the animated “The Hobbit” or “Ernest Scared Stupid.”  So this was quite the jump in terror.

Eric’s Advice: Favorite of the series and one of my favorite films of all-time. If you’re going to watch this film then watch the Special Edition version. I won’t say that it makes the theatrical version bad, but it does make it obsolete. 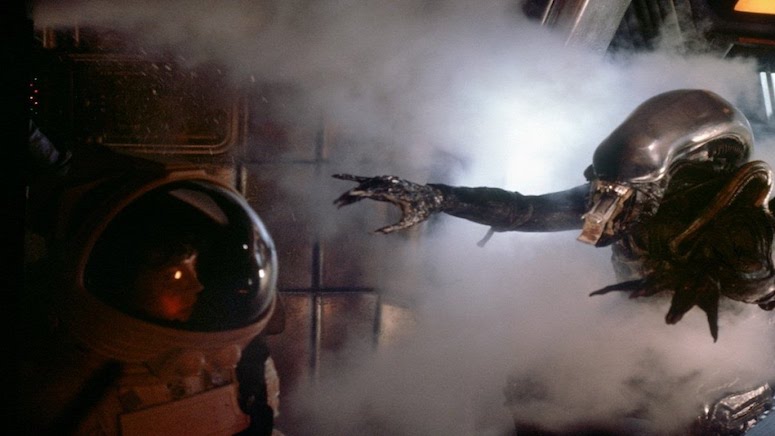 “Alien” is a brilliant haunted house film that just happens to be set in outer space. The writers had no real experience other than writing “Dark Star” and working on Jodorswky’s doomed “Dune” project. What they did have was one incredible idea. Essentially truck drivers in space are awakened for a distress signal. They set down on this unusual world. They find a crashed derelict ship with a corpse of a huge creature (Space Jockey) and a room of thousands of strange eggs. In a move that befits horror characters one decides to take a closer look at one and gets a facehugger attached to his… face. It actually implants him with an alien embryo that later bursts through his chest. In a short time it grows to full-size and begins picking off the crew members one by one. Eventually it is just down to one woman, Ripley who must find a way to escape from the ship without getting killed by the alien. Director Ridley Scott says he was greatly inspired by the original “Texas Chainsaw Massacre” and with that basic description it’s not hard to see why.

So what are some things of note about this? Well the infamous chest burster scene is just as shocking even if you were someone like me who grew up watching “Spaceballs” or had brothers who would stick their arms underneath their shirts to mimic it. There are some who still refuse to watch the movie for that scene. Of the two versions I like the theatrical cut better. The director’s cut is interesting with some of the new scenes, but nothing that makes it better. In fact, the most famous new scene of Ripley finding Dallas cocooned and Brett apparently becoming an egg is cool, but you quickly see why it was cut in the first place. It messes with the pace of the ending. If the film has one major flaw it would be that I feel it’s just a wee bit overrated. Now before you go nuts, just listen. There are so many interpretations of the film and its deeper meaning, but like I said it’s just a sci-fi version of a haunted house film. It is as well-executed as that kind of story can hope to be, but that’s what it is all the same. However, that’s more of an issue with the fandom than the film itself. My point being that when that’s your only main criticism for a film then you know it’s pretty damn good.

Eric’s Advice: A classic that started it all even if I think it may be a little overrated in terms of its depth. Still OBVIOUSLY see the damn film. 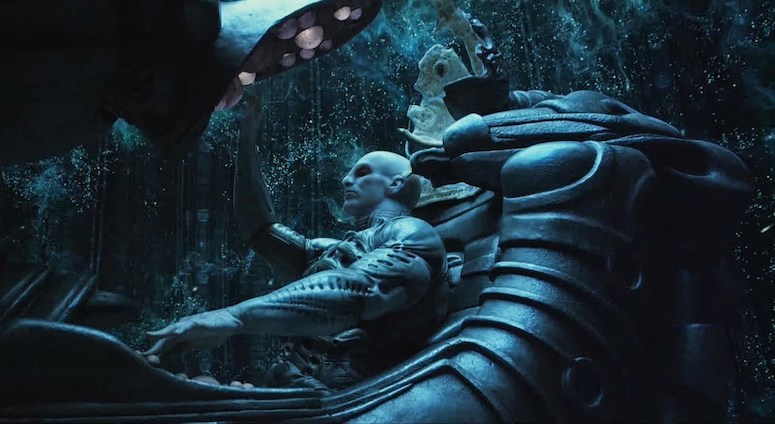 Oddly enough the whole “is it good vs. is it bad” thing is almost irrelevant. The movie is more of a roller coaster ride of crazy scenes. It’s a film that I’d be more likely to say, “you gotta see some of the shit in this film” before I tell them that I liked it. Which I did. The storyline is that a group of scientists find similar early drawings from different cultures across the world of a giant being pointing to a configuration of planets that the early people of these times couldn’t possibly have known about. Their theory is that these aliens were our creators and these were maps for us to find them. They go to the planet with the help of the Weyland company and find what at first seems like a giant cave, but turns out to be an alien laboratory long since abandoned. After all these years, they find the body of a Space Jockey (now called Engineers) only to discover that it’s our creators and we share 100% of our DNA with it. They also find a room of vases with black goo that appears to have mutagenic properties. The android David decides to test it by sneaking some into the drink of one of the scientists who has been a prick to him throughout the film. And the movie only gets crazier from there. Before our lead scientist, Shaw and the head of David set off to find the Engineer’s homeworld.

I remember way back hearing of plans for an “Alien 5” in which James Cameron would write and Ridley Scott would direct. After nerds all over the world finished cumming in their pants, it was announced that these plans fell through. Then, Ridley Scott came back and agreed to make a prequel, but as Scott himself put it the script evolved into something else. After seeing the movie I’d describe this film as a spin-off that happens to take place in the same universe as “Alien”… kinda. We can tell that Scott is apparently really into the ancient astronaut theory and wanted to use the “Alien” series as a vehicle to explore that. I can see why that may rub some people the wrong way. However, the criticisms and nitpicks of this more are insane. Ya characters do dumb things… almost as if they’re in a horror film, like oh I don’t know the “Alien” films! To me the new concepts vastly outweighed the bad parts. Even if that or the jaw dropping visuals don’t grab you this has some amazingly intense scenes like the “abortion” scene. I was holding on to my theatre seat for dear life while watching the first time. It worked for me even though it may not have been perfect. Still way better than most of the other sequels.

Eric’s Advice: If “Alien” is a bit overrated than this would be the underrated film of the series. I don’t think my review actually matters. It’s a film everyone SHOULD see just for the ride that it is.