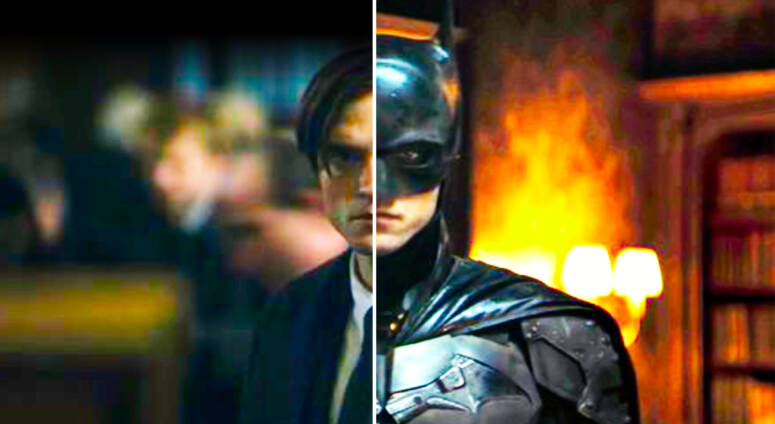 2021 is bound to be the year of the bat, but which live-action actor did Batman best?

Robert Pattinson’s takes on the caped crusader the Matt Reeves “The Batman” in 2021. Ben Affleck’s role reprisal in “Flash” is slated for release in 2022, but not before donning the cowl again in the much anticipated Zach Snyder cut of the infamously contested “Justice League,” coming to HBO Max in 2021. Michael Keaton reprises his iconic role from Tim Burton’s “Batman” and joins Bat-fleck and Ezra Miller (Flash) in the “Flash” movie. Now, even rumors of Christian Bale reprising his Dark Knight role, if Christopher Nolan gives his blessing. With all these Bat-men stepping into the cowl for the upcoming DCEU slate, audiences will be overbrimming with old stoic Batsy… but the question remains – Who did it best?

Mind your utility belts and keep your capes inside the bat-mobile as we take a warp speed stroll through the live-action history of DC Comic’s legendary detective – Batman. 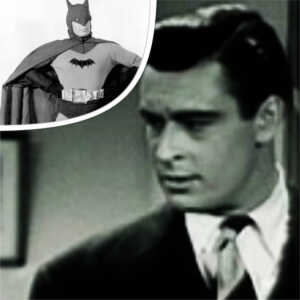 Lewis Wilson is the first live-action actor to play Batman in the 1943 serial of the same name.

The far from politically correct TV serial is broken into 15 chapters and follows Batman as he protects Gotham City from the siege of a stereotypical Japanese villain.

Wilson’s performance is mediocre and mildly racist but is enough to build fan adulation for future Bat-Men. 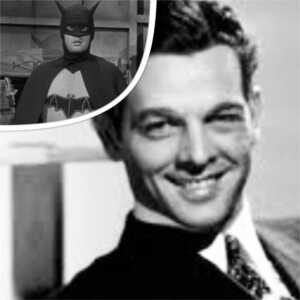 Riding on Wilson’s Batman’s cape-tails, Batman and Robin hit American TVs in 1949. This time, however, the series stars Robert Lowery as Batman. While less racist, the 15 chapter series is riddled with absurdities but has still managed to wrangle some minor cult fandom after a 2013 Rifftrax re-release.

Batman and Robin find themselves entangled with the hooded hellion, the Wizard, in a battle for Gotham’s control. Despite the unintentional retrospective comedic like-ability of the series, Lowery does little to win audiences and sends the live-action Batman brand to a dusty shelf for over a decade. 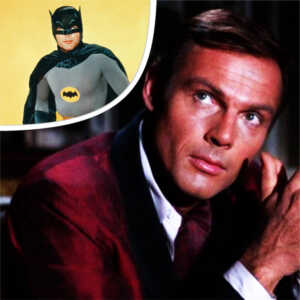 Enter the first fan-adored Batman – Adam West. In 1966 audiences met a groovy new psychedelic and color-soaked Batman. Adam West is joined by timeless Boy Wonder actor Burt Ward to star in both the acclaimed Batman television series and Batman: The Movie. While famous for being campy from the ludicrous capers, exclamatory word bubbles, and infamous shark repellent, the ’66 series has managed to etch its name in the annals of pop culture.

Despite the long list of celebrities of the time and some seriously swanky go-go dancing, audiences had their fill of the frolicked Batman and turned their attention to something a bit darker.

Related: ADAM WEST TALKS ‘BATMAN: RETURN OF THE CAPED CRUSADERS’ AND ALL THAT JAZZ 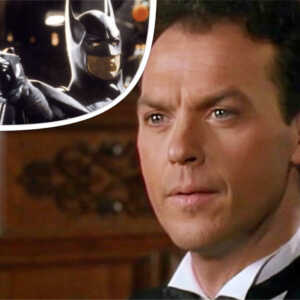 Tim Burton’s gothic and maniac take in Batman (1989) catapults his career into the A-List and illuminates the father of modern live-action bat-men, Michael Keaton. Starring opposite Jack Nicholson’s character-defining Joker, Keaton rides the line of snarky humor with a lot more of gritty heroics than past incarnations.

The sequel Batman Returns (1992) doubles the dose of violence and star power line-up featuring Michelle Fifer as Catwoman, Danny DeVito as Penguin, and a very nefarious Christopher Walken. Despite the iconic status of the set of Keaton-led Batman films, ’90s film executives found the film’s tone to be too edgy for the times and shelf future Burton installments.

Before reprising his stiff-necked Batman role for DCEU’s The Flash in 2022, Keaton tangentially nods at his superhero franchise past in the Academy Award-winning Birdman. 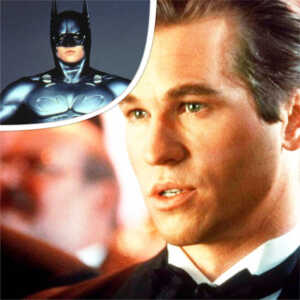 Joel Schumacher’s take on the caped crusader turns back the dial to campy and juvenile. This time a two-Faced Tommy Lee Jones and Ace Ventura Bat-Detective oppose the new and blonder Val Kilmer as he tries his hand at the legendary detective.

Jim Carrey does what hired to do and hammed and over-acted his take on the Riddler into slapstick oblivion, never the less leading the film to box-office success. Despite the lackluster and outlandishly goofiness of the film and stark departure from the darker Burton inspired tone. Batman Forever touts a celebrity soaked cast of Nicole Kidman as Dr. Chase Meridian, Chris O’Donnell as Robin / Dick Grayson, and even Drew Barrymore as Sugar, one of Two-Face’s leading ladies. Despite any perceived success, only the young boy wonder survives this line-up to reprise the cape and cowl. 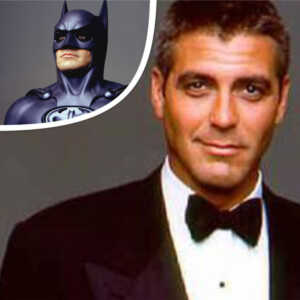 When all else fails, cast more celebrities. Chris O’Donnell reprises his Batman Forever Robin role alongside Clooney and is joined by a star-studded cast featuring Uma Thurman as seductive mad scientist Poison Ivy, Arnold Schwarzenegger as cold-quipping Mr. Freeze, and Alicia Silverstone as a noob-ish Batgirl / Barbra Wilson. While Clooney’s dashing cinematic persona would make him the ideal candidate, the combination of campiness, poor writing, and awkward cast chemistry leaves this film in the rubbish bin. Despite finding cult fandom in later years, this movie is an unfortunate blip in bat-history for which Clooney has profusely apologized to fans ever since. 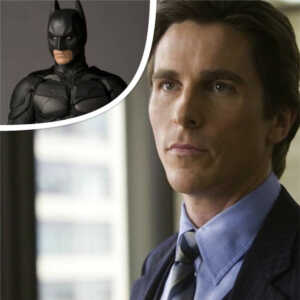 Helmed by director Christopher Nolan, Batman Begins puts Christian Bale beneath the cowl and for the first time since Keaton delivers on past promises of a truly mature and visceral Batman film. Bale stars opposite Liam Neeson as Ra’s al Ghul in a rejuvenated smash hit, giving way to follow-up films The Dark Knight (2008) and The Dark Knight Rises (2012). Of course, Bale’s Batman longevity saw some help from the late Heath Ledger’s posthumous Academy Award-winning reinterpretation of the Joker.

While Bales in-the-pocket performance fails to stand out against the more vibrant and quotable villain roles and a rocky trilogy topper, Christopher Nolan’s Batman franchise remains an overall leader in fandom. 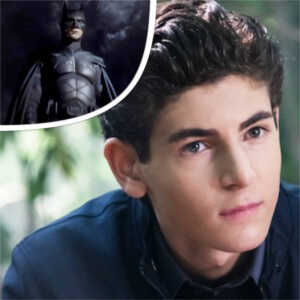 The TV adaptation, Gotham, debuted in 2014, focusing on the early days of Commissioner Gordon (usually a supporting character), and later expanding its approach to include the exploits of a teenage Bruce Wayne, along with the origins of several Batman villains.

David Mazouz plays a young Bruce Wayne in pursuit of finding his parent’s killer. Over the Gotham’s five-season run, Bruce evolves into the man who becomes Batman. In the Gotham series finale, uncredited actor Mikhail Mudrik physically plays that version of Batman. 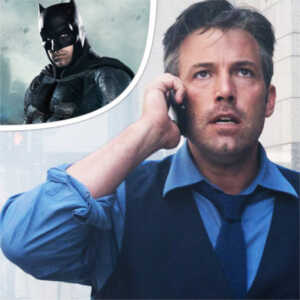 Coming off Man of Steel’s success, Zack Snyder brings audiences a bolder and more super-heroic world in Batman V Superman. And for the first time, a prelude to a live-action Justice League.

Despite mixed initial reactions to Affleck’s Batman (or Batfleck if you prefer), the caped crusader trudges on appearing in Suicide Squad (2016) and the infamously botched Justice League (2017).

After an on-again/off-again tango with a planned solo movie, Affleck ultimately departs from the role. In retrospect, Affleck’s run is one of the DCEU’s defining elements. After a continued outpouring of fan support, HBO Max subscribers will be able to experience the Batman’s alleged final dance in Zack Snyder’s Justice League, due to be released in 2021, and again in Flash (2022). 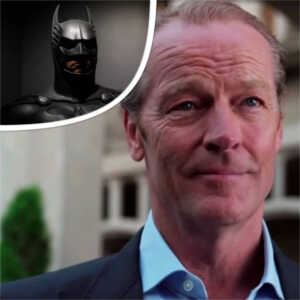 Before HBO Max, DC tested the streaming service waters with DC Universe. Before moving to HBO Max for a new season, Titans premiered on DC Universe. The series focuses on Dick Grayson, played by Brenton Thwaites, as Batman’s mentally traumatized former sidekick and reluctant leader of the Titans.

Amidst such a tonally dark and unforgiving show, Game of Thrones star Iain Glen’s Batman is bland and off-key. Glen’s strained American accent serves as nothing but a distraction to an already bewildering rendition of the master detective. Fingers crossed that he gets written out of any future installments. 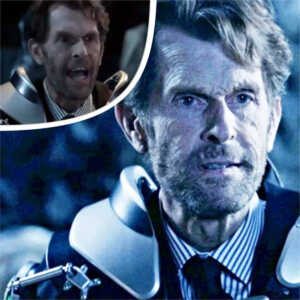 With a line-up of successful shows and the Arrow drawing to a finale, the CW began airing Crisis on Infinite Earths – a crossover event, masterfully weaving together not only the Arrowverse but also a healthy serving of nods to past DC TV series and films. Most famously known for voicing the character in the acclaimed Batman: The Animated Series, actor Kevin Conroy finally gets his live-action Batman opportunity as an alternate Bruce Wayne.

Unfortunately for Conroy, fans did not react well to the callous and bitter interpretation of the character. Wayne portrays more of an antagonistic than a hero, and it ultimately feels like Conroy’s cameo was more for fan-service than for posterity. 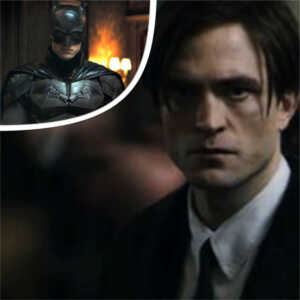 After Affleck’s departure, Planet of the Apes franchise savior Matt Reeves takes the helm as writer and director for The Batman. Despite being sidelined for months by the COVID-19 pandemic, Reeves and former teen-heartthrob Robert Pattinson have finally resumed filming.

With Reeves’ track-record for rich and nuanced films, Pattinson’s more recent indie film ascension, and a stunningly gripping sneak preview from the DC Fandome event, The Batman will no doubt become a staple for future audiences. The Batman, set to release in 2021, re-introduces the infamous rouges gallery amid Bruce Wayne’s second year as Batman.

It’s hard to pick one favorite Batman actor when so many leading men have donned the legendary cowl. Adam West stands out as the first actor to have a successful and history-making run as the character, albeit campy and relatively rudimentary compared to the more modern installments. Keaton shines as my personal favorite Batman, bringing to screen what I consider a perfect balance of charisma, physical prowess, and signature stiff-necked verbal staccato. Bale, while helming the most well rounded Batman movie franchise, fails to stand out as the best Batman with his subdued and relatively emotionless persona.

Ben Affleck had the most promise given his above-average acting chops and hulking physicality compared to past Batman actors. Unfortunately for all, DCEU’s general tumult squandered any legacy building moments for Affleck. And without a stand-alone film to create the much-needed audience and character relationship, fans will have to suffice with what they get in the upcoming Justice League Snyder Cut and Flash movie.

Ian Glen can hang up the cowl now. Loved him in GOT, but sweet mercy, is he an awful Batman. We’re left with a glimmer of hope for the future of the Character – Robert Pattinson. While many fans had a substantial concern when Pattinson was initially cast, it is hard not to be excited after seeing the teaser trailer from DC Fandome. While it’s too soon even to consider Pattinson among the top bat-men, his blend of refined acting skills and now proven on-screen fight stamina may make him a future contender. 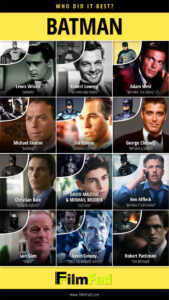 Who is your favorite live-action Batman actor?