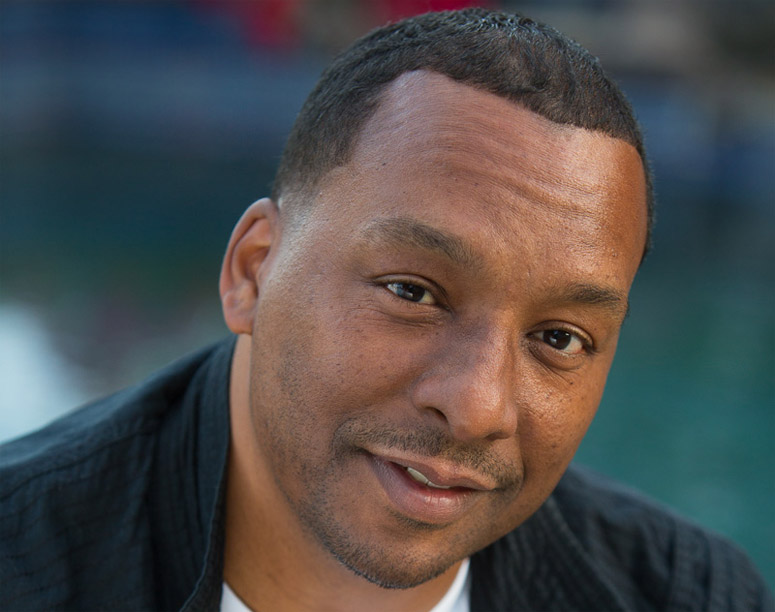 Deon Taylor came from a background in sports and is now the person behind a rising boutique film company. With a that background and a degree in biology, Deon diversified his background even more when making movies started to pique his interest.

“It’s interesting. I was actually playing basketball overseas. There was nothing really on TV to watch and I didn’t really speak the language until later so I started watching the making of movies and I became fascinated with the idea of filmmaking. I’m self taught as a writer, self taught as a director, and I just had a dream and an idea.”

After having a few films to his name, Deon’s film company began to grow. As the company continues to expand its reach, Deon sees more dynamic goals when it comes to Hidden Empire.

”Everyday it changes. (laughs) We’re seeking out to build a boutique film company that in one sense does what Jason Blum is doing but at the same time really looking to build something that artistically speaks to what I call the urban demo. And when I say “urban,” I’m not meaning black, I mean young America you know? Millennials. Cool features, things that make you think, makes you want to go to the movies again.”

Continually seen as one of the toughest industries to make it in, the entertainment business is a constant struggle for newcomers without those connections. Deon Taylor endured his own struggles being self taught but he sees this as a blessing in many ways.

”It’s extremely hard…yeah even now, everyday as an independent filmmaker, I’m faced with a basket of challenges. It’s always something. Not having those film school friends, not coming into the business at an early age with agents and managers. That puts you at a disadvantage but at the same time, it also allows you to have an advantage which is you’re free. As an artist you dictate how you move and what you do. Even though you have so many struggles, the biggest thing that I’m happy about is [that] freedom. If you fail, you fail on your own merit.”

“Supremacy,” another Deon Taylor film, is a more socially relevant film living in the drama genre. Initially Deon’s fascination began with the horror genre, but this film led him to new inspiration and direction.

“First of all as a black filmmaker, one of the biggest things I learned early on was oftentimes we’re put in a box in terms of you have to make that type of movie. And sometimes if filmmakers make that movie, they’re stuck in that box. And for me, I praised it and that artistry allowed me to not be held in a box because I think differently. I really love Steven Spielberg and the dynamic of what he’s been able to do as a filmmaker. I love the fact that he was able to do ‘The Color Purple’ and ‘E.T.’ At the core of it, it was family, but it didn’t matter what the genre [was]. I’ve been fascinated by that and that’s been one of the biggest things I have strived for, is to not be put in a box. I love horrors, I love thrillers, but I’ve become addicted to dramas and movies like ’Supremacy’, I just love the artistry and acting. I love being able to put the camera there and tell real stories.”

“Meet the Blacks” was a film in the comedy genre and had strong momentum debuting at fourth in the US for box office numbers. It ventured off of Deon’s regular path and he considers it one of the highlights of his career.

“‘Meet the Blacks’ is probably one of the biggest highlights of my career. People laugh at it [and] I aggressively pursued that because I’m building a company. As a filmmaker and the president of a company, I’m trying to build something unique and I felt like Hidden Empire should be diverse.”

Despite the comedic joy that “Meet the Blacks” brought Deon, it also is a reminder of the loss of a close friend. As Charlie Murphy’s last movie before his untimely passing, Deon thinks about his friend often and promises a tribute to his character in the sequel to “Meet the Blacks.” 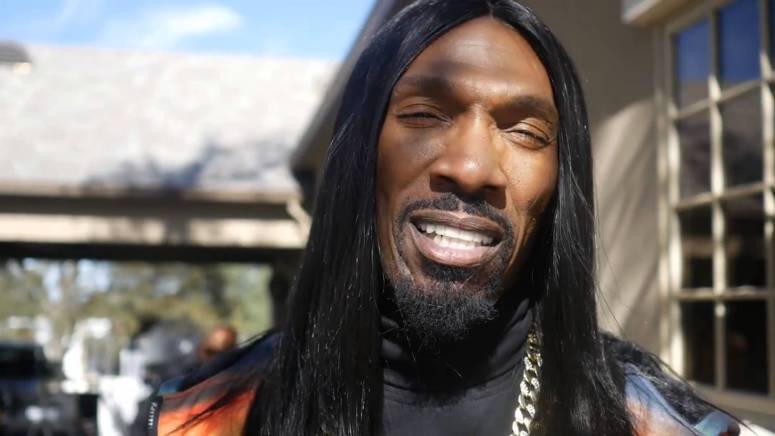 Charlie Murphy on set of “Meet the Blacks”

”Charlie [Murphy] was a big loss for me. He was a very very close friend of mine outside of ‘Meet the Blacks’. As a matter of fact, Charlie was one of the most special people I’ve had in my life in the entertainment industry. When I first was starting out and trying to get a movie made and actors would be like, ‘Well who is he? What has he made? I don’t know who he is.’ People were passing and I went to Charlie Murphy for the first time and Charlie was the first person to come to me and be like, ‘I’m going to be in your movie man.’ And he was a very very real person and physically there, mentally there. There was no Hollywood about him. If he took to you and he liked you, that’s what it was, you guys were friends. It’s really sad when I think about him dying and how incredible he was. I love Charlie and I’m just happy we had a chance to do ‘Meet the Blacks’ together and [it] was his last movie. We’re doing ‘Meet the Blacks 2’ and I’m going to reprise his character. We have a big tribute in the beginning of it. We’re able to take a bunch of footage we have from part 1 and it’s unseen and build out a really funny character. So I’m excited about that.”

Already Hidden Empire has a strong trajectory moving forward. With their upcoming slate, they are on the path for substantial growth in the film industry. With high profile cast members, unique stories, and a solid team,
their upcoming movies have a strong formula for success.

”I dropped back into the drama/thriller world again and I’m just [finishing] a movie which I’m sure will get a whole lot of critical acclaim which is a movie called ’Traffik’ which stars Paula Patton, Omar Epps, and William Fitchner. It’s an incredible drama/thriller centered around the world of sex trafficking. We were very blessed to have Dante Spinotti as my cinematographer in the movie. He’s been nominated for 4 Academy Awards. Dante shot ‘L.A. Confidential’, ‘Last of the Mohicans’, ‘Heat’, [and] currently he’s doing ‘Ant-Man’. So we just made a beautiful movie with him that I’m very excited about.”

”And currently I’m shooting a straight horror/thriller called ‘Motivated Seller’ with Dennis Quaid, Michael Ealy, and Meagan Good. This is a really good movie. It’s about a [married couple] that buy a house in Napa [Valley] and they work in San Francisco. They’re millennials. And they buy this house from this guy played by Dennis Quaid. And the only problem is after they buy the house, they realize he’s not leaving. It’s probably ‘Get Out’ meets ’Split’. Dennis Quaid is reminding me of Jack Nicholson in ’The Shining’.” 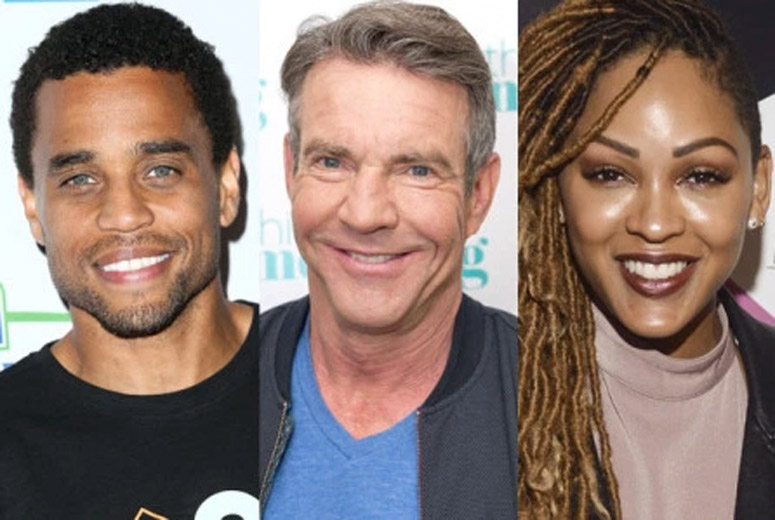 “Dennis Quaid is reminding me of Jack Nicholson in ‘The Shining’.”

”After this, I’m going to end up doing the biggest movie of my career and the biggest movie we will have with the Hidden Empire brand which is a movie called ‘Free Agents’. The budget on that is going to be anywhere from $15 [million] to $20 million. It’s a heist film set in the world of professional football. It’s professional football players that pull heists every week on the road before games.”

Prior to our closing goodbyes, Deon Taylor took a moment to reminisce and discuss a key figure in his life.
As a struggling African American filmmaker, Deon was given a chance by another successful African American business man which partially shaped Deon’s family-driven, altruistic nature with Hidden Empire.

“There’s been someone in my life for the past 10 years who has been absolutely instrumental which is Robert Smith. Robert Smith is someone who is not in the film business. He’s made an incredible fortune being one of the best business people of our time. He owns a company called Vista Equity. But what’s been fantastic about him though, as a young filmmaker and someone with an idea he saw my vision and he bet on me. He financed two of these movies and it has allowed me to stand up and soar. I think that’s absolutely incredible, especially in the African American community to have another black entrepreneur step in and help a young black filmmaker. It’s that type of energy I’m applying to people underneath me and next to me. [Hidden Empire] is a family. My wife, my brother, my cousin, young kids, inner city kids, we’re just allowing everyone to get in here and work.”

Deon Taylor exuded motivation and heart throughout our interview. As a man of many talents and learning driven by passion, he has found his way into success and has built Hidden Empire from what started as just a dream. You can find out more about Hidden Empire at http://hiddenempirefilmgroup.com/.