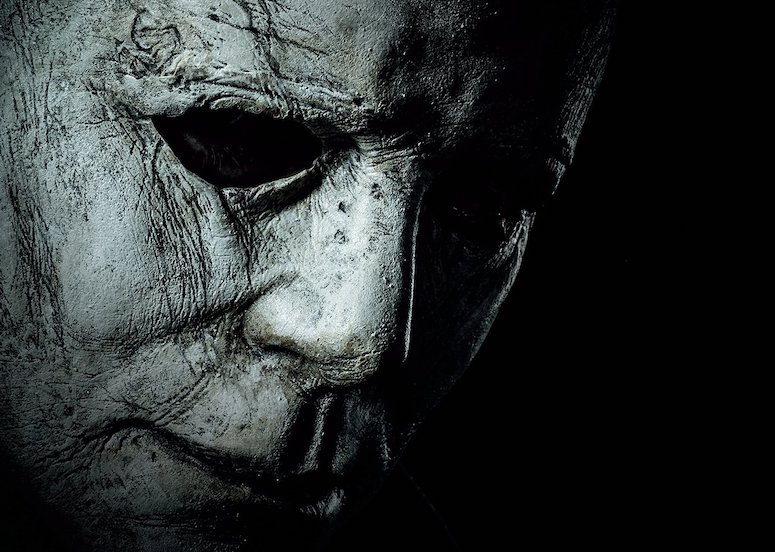 So here we are again, the “Halloween” franchise is currently so broken that to save it we must reboot the continuity.

This time for an added bonus we get to bring Jamie Lee Curtis back to the role that made her famous, Laurie Strode… again. Still after “Halloween H20” did an adequate job of restarting the series it still fell apart again shortly after. So let’s see if this Jamie Lee Curtis return is worth the hype and a true successor to the original John Carpenter classic.

The story is that 40 years later Michael Myers (who I guess was caught at some unforeseen time shortly after the original film ended) is still in the asylum. He’s still just as silent and creepily stoic as ever. Once again they’re in the process of transferring him to another hospital and the bus crashes. Laurie Strode has become the weirdo survivalist old lady of the town. Which also has isolated her from her remaining family. In “H20” adult Laurie was basically how I think she would have turned out regardless of living through that night. In this version she’s a broken woman with a strong will to keep her and her family safe. Michael returns to the town, finds his old mask and begins killing as many people as he can. Eventually leading to the conflict we all came to see. As you can tell much like the first “Halloween” the story is pretty basic. Written by Danny McBride (best known as a comedic actor) it really tries to recapture the original’s magic. For the most part it succeeds.
Slasher films often have a reputation for poor filmmaking yet the original is revered by fans and critics alike. The other films, not so much. I have to say this new version is a very slick-looking film. While much of the film takes place at night it’s appropriately dark while still making sure that the audience can still see things. The warm glow of the Halloween lights and jack-o-lanterns do a great job at setting the mood throughout the film. All the actors are solid in their roles with of course Curtis being head and shoulders above everyone else. Even the young child being babysat is really enduring. Especially since we really don’t have that long to make a connection all things considered. The granddaughter Allyson is likable and well-acted, but I could never shake the fact whenever her scenes went on I’d much rather be seeing Jamie Lee Curtis. As that is the main reason I came for this movie. We also have Judy Greer as Laurie’s daughter. They walk a fine line with her since she’s often at odds with the character we actually like. However, once we get to know her better they give her her own story arc that’s quite satisfying. 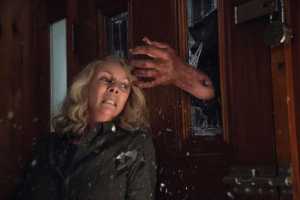 This time it’s not just Jamie Lee Curtis who returns, but also Nick Castle who played Michael Myers in the original. That would have been all fine and good, but they went the extra mile by also getting John Carpenter back as producer and composer. The music is great and something I’d like to give a full listen to later. However, I gotta say the price of admission was fully paid as soon as I heard the Halloween theme and other iconic cues playing full blast in a theater. Now the big question is this, is the film scary? I really didn’t find it to be. I think the creepiest scenes were spoiled in the trailer. One was the bathroom scene and the other was when Michael hides in a little kid’s closet. Both should have been nail-biting, but instead were just well-done exciting scenes.
Now as I’ve always said in my opinion a scary movie can survive not being especially scary. As long as the story and characters are good enough. Luckily as we mentioned before it mostly succeeds in that. You do get a very triumphant feel by the end. It is said that the original title of “Halloween H20” was “The Revenge of Laurie Strode” that may have been a more fitting title for this film. As for a casual fan’s perspective on this being yet another reboot, I’m personally fine with movie franchises having second tries if they can do better. It’s a little weird for me that they separate Laurie and Michael as brother and sister. As a kid that was the one detail everyone knew about the series through pop-culture osmosis. Unfortunately there are a couple of twists and plot points that don’t go anywhere and feel more like plot digressions, which is a shame as they could have made a more interesting movie.

I would watch it again, but I’m not planning to. All the nods and reversals on the original may make this an interesting second part in a double feature viewing with the original. Actually as I type that I’m really curious.

“Halloween (2018)” is a respectable job and definitely the best sequel this franchise has ever managed (sorry “Halloween 3” fans). There are sadly a number of things that hold it back. Jamie Lee Curtis again gives Laurie an incredible amount of depth and reminds us why we enjoy her so much as an actress. The new characters while not great do follow in Laurie's tradition of the trying to be something a little more interesting. I give it a respectable 4 out of 5 stars.