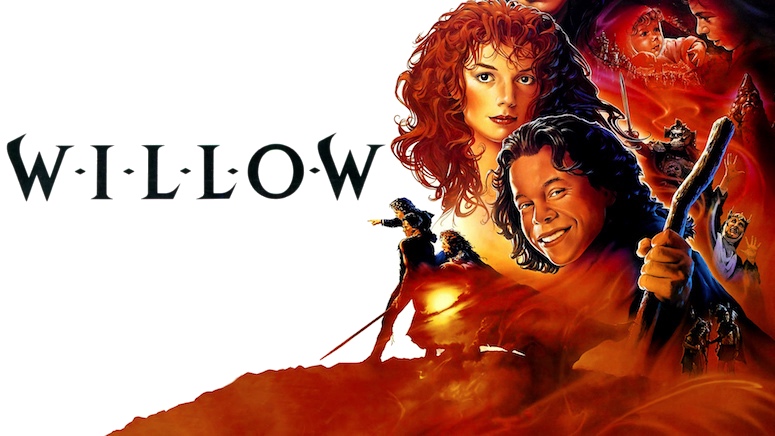 I can speak for myself that it is one of my most treasured of films. But why is that? Why did this film underperform when it was originally released, but now has fans so dedicated? With a local theater the Naro screening it soon (June 6th) I thought it would be good to try to find out beforehand.

It is said that much like how George Lucas attempted to get the rights to “Flash Gordon,” got turned down and then made his own version with “Star Wars” he tried to get the rights to Tolkien’s “The Hobbit” and “The Lord of the Rings.” Once again being turned down for that led him to try to create his own version with “Willow.” I don’t know if that’s true, in fact it doesn’t quite to gel with some other facts and stories I’ve heard, it’s most likely just an internet story. Regardless, the story of “Willow” is that a prophecy foretells of a baby being born that will bring about the downfall of the evil Queen Bavmorda. The baby with the mark confirming all this  is born and hidden away before being found by a race of little people. An aspiring wizard/farmer Willow Ufgood is charged with giving the baby to someone else to protect. Only to learn the baby’s true purpose. Now in too deep he continues to take her on a quest to find a good sorceress that can help stop Bavmorda. Along the way he meets up with a disgraced knight, Madmaritigan, even smaller creatures called Brownies and the daughter of Bavmorda who eventually changes sides. Now if that sounds pretty standard I can’t disagree. It’s often been complained that this is basically just “Star Wars,” but in a pure fantasy setting. 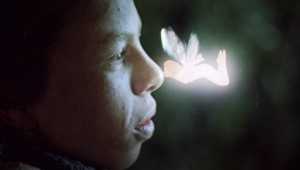 Probably the most visually interesting shot of the film.

As far as the technicals go this is a very well-made movie. It has the appropriate sense of scale. The effects were considered state-of-the-art. Not just because this was after ILM had hit its stride and could do most of these effects like matte paintings in their sleep, but they also created brand new ones. In the scene where Willow becomes a true wizard and changes Fin Raziel back into a human we have the birth of morphing. Morphing was a technique where the computer would morph two different images together. Many see it as one of the forerunners to CGI and the digital effects revolution. Also, for my “Jurassic Park” fans many are already aware the original plan was to use go-motion to animate the dinosaurs. Go-motion is similar to stop-motion just you use a computer to add motion blur and thus smooth out the jerkiness of the movement. Well if you want to have an idea of how that would have looked just watch the scene where they get attacked by the two-headed dragon named the Eborsisk (not named in the film itself, but apparently a reference to Roger EBERT and Gene SISKEL). Fun Fact: since they couldn’t find the right role for the director’s brother Clint Howard, they modeled the dragon’s face off of him. I’m sure he appreciates that. Ron Howard directs and in keeping with his usual style visually it’s not ugly, but it’s also not especially pretty or memorable. His energy here is focused on getting the character and acting down right.

Speaking of the acting it is all pretty solid here. For our lead we have Warwick Davis. At the time only known as being the suit performer of Wicket the Ewok in “Return of the Jedi.” Apparently he so impressed George Lucas that this role was written specifically for him. Davis has in the years since proven to be a very gifted actor with a lot of range. Here, he reminds me a lot of Mark Hamill in terms of how sincere he is in this fairy tale like setting. We also have Val Kilmer as Madmartigan who can be described as the knight version of Han Solo. He’s pretty good, but like most in this world he’s no Harrison Ford. Most of the main actors are fairly good. It’s the side performers where this gets a little uneven. As cool as General Kael looks with his skull mask, Pat Roach the actor was primarily a stunt performer. You may remember him and the big Nazi/slave driver that Indiana Jones fights with in “Raiders of the Lost Ark” and “Temple of Doom.” His voice is very over-the-top big evil guy sounding. It may be hard to recognize one of the Brownies is played by Kevin Pollack, a wonderful supporting actor who is best known for his dry understated humor having to really camp it up with a thick French accent. The quality of actors varies wildly like that throughout the film. We also have James Horner doing the score turning in one of his all-time best. The score really does rival some of John Williams best. Another fun fact: This film is where I got my name. My parents were having trouble deciding on one and since my older brothers watched this film all the time they suggested Airk from this film. Luckily for me they decided to change the spelling. 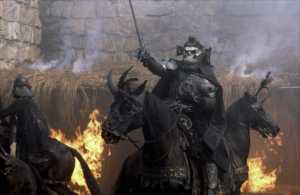 When I was a kid we had this film recorded off a local TV station. My aunt who lived in Florida also owned the film officially on VHS. While I watched that recorded version all the time, getting to watch her copy was one of the highlights of going to visit her. This station chopped movies up quite a bit for violence and many other things for seemingly no reason. So when I watch the real version of the film to this day it feels like I’m watching a director’s cut with all sorts of little/big scenes added back into the movie. There are a number of moments that I found frightening as a kid. The trolls looked liked a perversion of Stink (a beloved childhood character for me) from the “Land of the Lost” series. Plus, the scene where Queen Bavmorda turns the entire army into pigs. None of these were as bad as other things from my childhood, but I always felt a bit uneasy while watching these scenes even though I knew full well they were coming.

So I’ve been trying to figure out for myself why this film resonates with me so. It’s not like it’s a terribly deep film and as I mentioned earlier it’s not terribly original. However, like the old saying goes “it’s not what your movie is about, it’s how it is about it.” Again it doesn’t do anything spectacularly, but I’d say it’s a good distillation of many fantasy stories up to that point made by filmmakers at the top of their game. It has that nice message about how the seemingly most vulnerable can rise to the occasion and go on an adventure. At the time, this was the closest to a live-action version of “Lord of the Rings” or “Legend of Zelda” we had. Although for me personally, this predated my knowledge of the others. So maybe because it unlocked my imagination into a larger world of the fantasy genre, which is now one of my favorite fandoms. May it continue to do that! On the commentary for the old DVD Warwick Davis (who just seems like the nicest guy in real-life) says he still gets young people recognizing him for “Willow.”

Well, given that it’s one of those films I’ve been watching since I was a wee child I’d say that it stands up to multiple viewings.

Like many of George Lucas’ projects there were plans to continue this story outside the film. Although given that it was George Lucas, exactly how sketched out those plans were is debatable. Eventually there was a sequel trilogy of books about a grown-up Elora Danan. Written by famous comic book writer, Chris Claremont based off ideas of George Lucas. I’ve never read them. Also, I’ve had trouble finding a strong consensus from fans of if they’re worth my time or even how much Willow himself features in them. Why do I bring this up? Well when Ron Howard was first announced to be taking over directing duties for “Solo: A Star Wars Story” my first thought was “I hope this means a “Willow 2” could happen!” Knowing in my heart of hearts it probably wasn’t. However, recently it has come out that talks at Disney are happening.

Mind you it’s still fairly unlikely, but just them talking about it is more than I was expecting. So what would I want in a “Willow” sequel? Honestly I don’t know, but as long as Warwick Davis returns I’d be happy. It’s fantasy so they’re literally millions of different places to go. They could adapt the books which is really unlikely (see Disney’s attitude toward the old extended universe for “Star Wars”) or go in whatever direction they want. If they could go from “A New Hope” (another basic story) to “The Empire Strikes Back” I see no reason something similar couldn’t be done for the “Willow” franchise should they decide to do it and depending on who’s involved. Point being I’m excited. If nothing else can we AT LEAST give Warwick Davis a bigger role in these newer Star Wars movies? I know he was Wicket and he’s been cameoing in all of them, but seriously let him show his face and have a significant role to play. He’s proven it many times over that he has range as an actor.

One of my personal favorite films since childhood so I obviously do recommend it. That being said from an objective view it is a fairly basic film. There certainly are many smaller details to make it a unique entity, but it is a basic story all the same. Lucas was still on his A-game with Howard giving it his usual stamp of quality. Some will love it, others may not see what the hype is all about. Just at least give it a fair chance. I give it 4 stars out of 5.