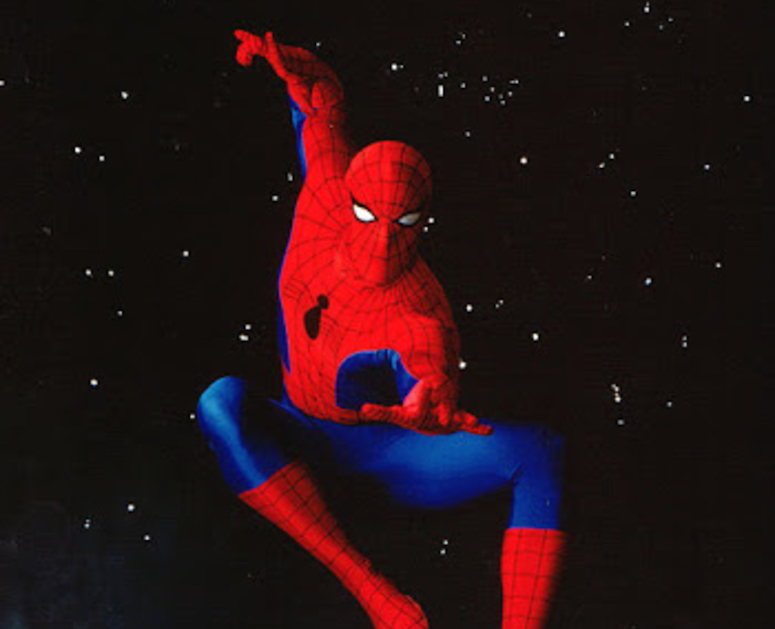 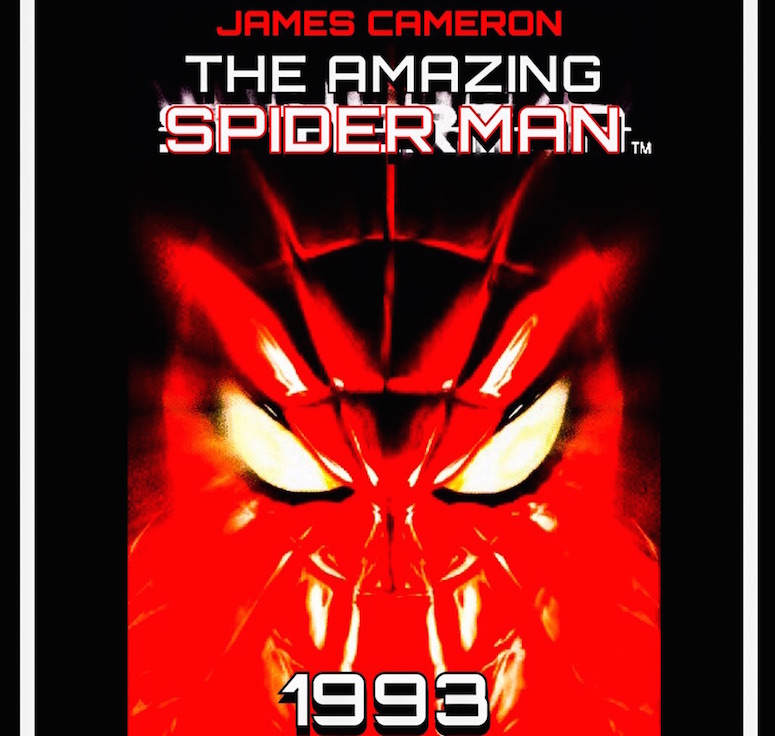 Probably the most famous of these examples and has had movie nerds like myself wondering what it would have been like for decades. The problem comes from with all those years of speculation we have very little solid facts. Or rather we have a ton of half-truths and theories that got internalized as conflicting truths. First of all who was supposed to be in the film? Arnold Schwarzenegger as Doc Ock? As much as that makes sense for him being a friend and frequent collaborator there appears to be no truth to it. Mainly because Doc Ock wasn’t in Cameron’s REAL script (I’ll get back to that). Who would have played Spider-Man? I’ve heard everything from Edward Furlong (“T2: Judgement Day”) to Leonardo DiCaprio (this would be pre-“Titanic”) and Michael Biehn who honestly even back in the first “Terminator” film seemed too old for Peter Parker. Although personally he’s probably my favorite choice of the three.

Now there are 2 scripts with James Cameron’s name on them. The one with Doc Ock is of… dubious quality to say the least. The reason is it was written by different (Cannon) writers. Guess what? We get another visit from our old friend rights issues! The rights were about to expire unless a script was delivered by a certain date. At the time Cameron was busy with other things and didn’t have time to hash out his idea into a script. So he took an older script, changed a few words and names around and put his name of the front page to exploit a loophole. This is where all of those weird scenes with Doc Ock and his assistant Wiener come from. Still, it allowed him more time to work on his own script. The actual villains were going to be Electro and Sandman. It’s also the reason we didn’t get them on the 90s “Spider-Man” animated series, although we eventually did get Electro in the final season. Cameron’s script did introduce ideas that the Raimi films would later use like the organic web shooters. It was eventually rejected due to the huge budget needed (and knowing Cameron it probably only would have gotten bigger as it went along) and in general being a bit too edgy for a Spider-Man film. Instead, James Cameron had to just settle for making all the money with “Titanic” and then again with “Avatar.” I doubt it bothers him much anymore. 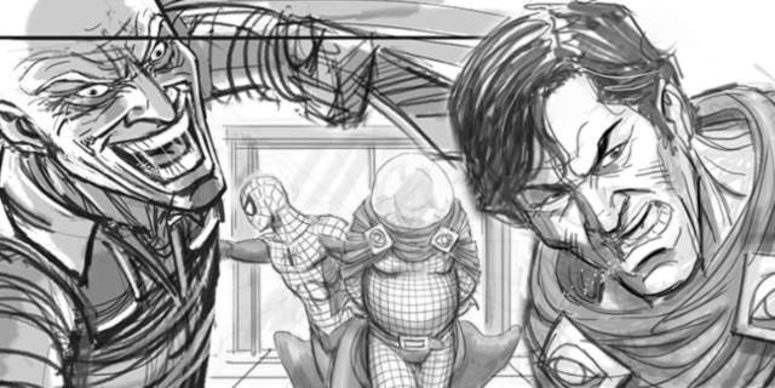 “Spider-Man 3” gets more hate than it deserves THAT HAVING BEEN SAID it has a lot of problems. From the old too many cooks in the kitchen to the director not liking one of the central characters. Shock of all shocks it turns out when that happens we don’t get that great of an adaptation of said character. It is said that Sam Raimi took the criticism of “Spider-Man 3” personally and wanted to end the series on a better note. So even though most of the news, marketing, and the movie itself indicated that this was the ending to the series there were plans for a forth film. In some interesting future coincidences they reportedly wanted The Vulture (John Malkovich although I distinctly also remember hearing Sir Ben Kingsley being mentioned as well) as the main bad guy and The Black Cat (Anne Hathaway) as the secondary villain.

Not much is known specifically what they story and themes would have been. However, recently some storyboards surfaced showing off what would have possibly been the greatest moment ever with Bruce Campbell as Mysterio! Why didn’t it happen? Again, the too many chefs issue was rearing its ugly head in again with the producer Avi Arad trying to push The Lizard in there. Eventually the deadline got to be too much for Sam Raimi and he had a choice. He could make the deadline with an unfinished script and possibly make another disappointing sequel or leave the series. He chose to step away and let it die than release an inferior product. Say what you want about his series, but you have to respect that. 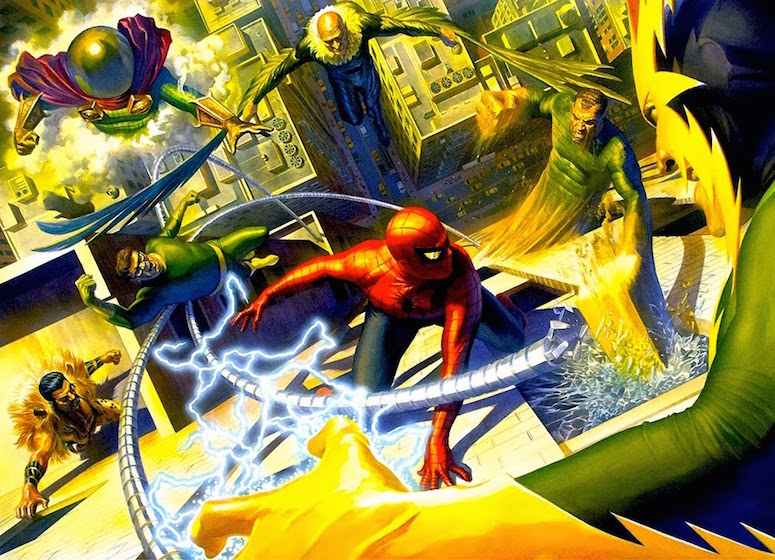 I know there are those who think I may be too soft on the Raimi films while also being way too harsh on the Marc Webb films.
…
So anyway on to how royally the Marc Webb films screwed up Spider-Man and how I do NOT feel bad about bashing them. I don’t feel like I need to state my case. The films are out there… unfortunately. When I attempted to explain the plot of “The Amazing Spider-Man 2” to my cousin over the phone he said it sounded like a drunk history video. I couldn’t disagree with him. You want more proof the creative team at Sony is the LJN of the comic book film world? Let’s go over what their plans were for the following films. They were (and still are) obsessed with a Sinister Six film. On paper that’s not a bad idea, but with how SUBTLY they crammed the foreshadowing to those future villains it didn’t leave me with much confidence. They always were up front about wanting to create a cinematic universe, but despite how large Spider-Man’s corner of Marvel is it’s still not really big enough to support it on film.

They of course wanted a Venom spin-off. It’s not surprising as they’ve wanted that since “Spider-Man 3.” Now the idea of how to lead in from one to the other wasn’t bad. In order to defeat the Sinister Six Spider-Man would use the black suit, get rid of it and then it bonds with Eddie Brock to create Venom for his own film. What’s stupid is why he got rid of it. In the comics and even in “Spider-Man 3” the suit is like a drug for Peter Parker. He only gets rid of it when he realizes it’s alive and changing him into something he as a good person doesn’t want to be. In this film the reason he got rid of the suit is that the Sinister Six made fun of Spidey calling it lame. I can’t even imagine someone missing the point this badly. Say what you will about the dance montage in “Spider-Man 3,” but it did make you the audience want to see Spider-Man get away from the suit. Also, according to the Sony e-mail hack (no I don’t mean Amy Pascal) they also seem to be indicating that Spider-Man would actually team-up with them to defeat Carnage. Again, at first glance it seems like an interesting idea. Until you remember this was supposed to lead into the Venom spin-off which would mean Carnage comes before Venom… WHA!?

Regarding the Sinister Six, let’s look at some of the casting ideas. For Doctor Octopus they had Sean Penn, Denzel Washington, George Clooney, Daniel Craig, Colin Firth, Matthew McConaughey, Channing Tatum, Will Smith, or Matt Damon in mind. All interesting ideas, but also so completely different from each other. Meaning that it’s clear they didn’t have a firm grasp on the character much less what their take would be on him. Same goes for the Sandman which had names such as Jonah Hill and Danny McBride on that list. To top it all off other Sony hacks (no not Tom Rothman) showed that they were so desperate and with no clear ideas of where to go they were even considering pulling a “X-Men: Days of Future Past” with rehiring Sam Raimi to the franchise. So no I do NOT feel sorry for Sony. I am worried about what will happen once the contract with Marvel Studios expires because even after having seen “Spider-Man: Homecoming” I have NO doubts that they will probably almost immediately drive all the hard work Marvel has done into the ground. Now if you’ll excuse me, I need to do my daily dancing over the grave of “The Amazing Spider-Man” series.

What do you think? Which one of these failed Spider-Man films would you like to have seen?