“Spider-Man: Homecoming” brings the character back to his roots.

Months after the events of Captain America: Civil War, Peter Parker, with the help of Tony Stark aka Iron Man, tries to balance his life as an ordinary high school student in New York City while fighting crime as his superhero alter ego Spider-Man. As a new villain, the Vulture, emerges Peter’s abilities are put to the test.

Spider-Man finally feels like part of the MCU with a story that picks up shortly after “Captain America: Civil War.” Forgoing the typical origin story, “Spider-Man: Homecoming” focuses on developing an already established character. We learn about Peter Parker coping with being Spider-Man which provides more substance for the his high school life and relationships. Knowing more about the person behind the mask surprisingly makes Spider-Man’s screen time a more enriching experience. It truly feels like Peter Parker is Spider-Man. 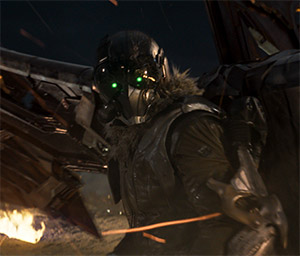 With that said, Tom Holland is absolutely brilliant. He’s the perfect balance of the old and new characters from the comics. He’s coy and awkward as Peter and witty and sharp as Spider-Man. He is just about as perfect as he can be in the role. His opposition, the Vulture, is a new take on a classic and foolish character. Michael Keaton gives a menacing portrayal providing a suitable rival for Marvel’s iconic hero. While Spider-Man clearly has the physical advantage, Adrian Toomes (Vulture) has the advantage with experience.

The other supporting cast members do their jobs of supplementing the main character’s development. Robert Downey Jr. plays the intermittent role of mentor and connection to the Marvel Cinematic Universe. He’s present throughout but doesn’t overshadow like many expected. His high school friends Ned, Liz, and Michelle establish Peter’s personal life through strong chemistry and banter. Aunt May has a lot less screen time than expected but is the subject of many moments of comic relief due to her youthful appearance. The only character I absolutely despised was Flash Thompson. Tony Revolori plays the role well but it’s just a bad reimagining of the character. He’s not menacing mentally or physically and I never once took him seriously as the classic bully of Peter Parker.

Overall “Spider-Man: Homecoming” is a fluid, well paced film with a strong cast that develop impactful characters. While it’s a Sony film, Marvel has their stamp everywhere influencing the mechanics of the film in a positive way.

Whether it’s Peter or Spider-Man’s turn for screen time, they both maintain audience engagement. Peter’s moments are filled with laughter while Spider-Man’s are pure action-based fun. Each battle that occurs becomes progressively more entertaining as well. As Peter learns more about his Stark designed suit, we get to see what the suit is capable of making each encounter unique.

There is also a constant change of scenery and locale. While Spider-Man resides primarily in New York City, a brief trip to Washington D.C. provides a new backdrop for the character. Even the time in New York isn’t composed of the same landmarks we usually see. Seeing this Spider-Man fighting in these new locations adds to this fresh reboot of the character.

With Marvel’s influence, this may be the most entertaining Spider-Man yet. Most will consider “Spider-Man 2” the best of the films, but this movie is at least on par if not better.

“…a brief trip to Washington D.C. provides a new backdrop for the character…”

This is an essential film to add to your collection and one that you should probably experience more than once in theaters. It is put together well enough to make each viewing an enjoyable experience.

"Spider-Man: Homecoming" is one of the best films in the franchise. Tom Holland fits into the role better than any of his predecessors and creates a character most any fan can appreciate.

Saw it today. Keaton was the best thing in the movie. Really great performance. I liked it, but wasn’t super pumped for it. Couldn’t stand Ned. Lots of fun Easter eggs throughout. It did do a great job playing on my expectations as a comic nerd, and making a great twist.

Ned didn’t bother me too much but Michelle and the new Flash Thompson did.