I’ll just get this out of the way, I have never seen anything from the Thunderbirds franchise.

Not the original show, the movie, the reboots… nothing. All that I do know is that it was originally a TV show from the 60s and made with puppets and models. Many other films, shows, and filmmakers have referenced it and it has influenced many things. “Team America: World Police” is a feature-length spoof of it, the visual style at least. Also the main catchphrase of the series is “Thunderbirds Are Go!” Which just so happens to be the title of this new series. With that I have fully exhausted all of my previous knowledge going into this new CGI series. So I had no idea what to expect, I’m like a kid flipping channels and giving a new show a chance.

The basic set-up is made clear by the end of the first episode. In the near future there is a team of people known as International Rescue (I.R.) who go around the world… rescuing people from disasters. Okay, fair enough for a simple kids show, but the first episode does drop you right into things which makes it hard to get into the characters and the specific story of the series. The team is made up of 5 brothers and one random girl (who I don’t believe is related), a father they keep referring to (“it’s what dad would have wanted”) which I gather is dead before the series proper and from that I guess that means he’s the creator and the kids are following his legacy. All of this I was not sure of. Now if this show is meant for the fans of the original show that’s fine but for a newcomer it didn’t explain its world especially well. There’s this rich woman who is almost constantly being chauffeured around and I honestly have no idea who she is and what her connection to I.R. is. I mean I know there’s something as the talk over hologram phone things but I could never really figure it out. I’ll just condense the voice acting here since there’s nothing much to say. Nobody is awful, but nobody is memorable either. The best is Rosamund Pike doing a very upper-class diva voice so you may not even realize it’s her while watching. The main word to describe all of the acting and characterization is bland. All of the characters act the same. With a gun to my head I couldn’t tell you who was who other than that’s the blond haired one and that’s the brown haired one. If you only had their dialog to read, I highly doubt even the hardcore fans could tell the difference. 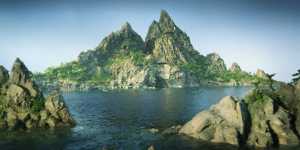 If you can believe it, this is all a big model and it’s pretty cool looking.

It just so happens that the word “bland” is also how I’d describe their facial designs. Like I said earlier the original was done with puppets and this with CGI. However they’re clearly trying to make the CGI look like the puppets with the big eyes and plastic skin. It reminds me of “Toy Story” in terms of texture except these are supposed to be real living people. I wouldn’t mind that kind of texture so much if they hadn’t also tried to limit their expressions as well. I get that it’s likely a reference to the original puppets, but if you’re going to do the show in CGI then use the CGI. I realize that even these limited CGI expressions are still light-years ahead of what a puppet could do in the 60s but the issue is this, if it was a puppet we know to accept the limited expressions. That’s just how it works and can be part of the charm. But when you are using CGI why limit yourself like that, go all the way in one direction or the other. Aside from that issue I rather liked the visual style. It was a bit misleading earlier referring to the entire show as CGI because only the characters, ships, and effects are. The backgrounds are models, very detailed models created by Weta Workshops. If that name sounds familiar it’s because they’re the ones who made the models and miniatures for “The Lord of the Rings” trilogy and they’re gorgeous to look at. At first I thought it was all CGI, but after awhile I realized it was too good to be so I checked online and sure enough it was handmade real sets. Sadly I was far more interested in looking at the background over the characters.

If this doesn’t already have a toy line, it really is perfect for the types of kids that love vehicle toys.

I did kinda like the idea of a kids show with no real villain, just good people helping others in need. Then at the end of the second episode it turns out we do have an evil genius villain, The Hood (although he’s not in all of the episodes) who looks and feels like he’d be right at home fighting James Bond. The characters all immediately act like there’s this long history with him, but unless I missed something and there were earlier episodes, the show doesn’t explain it much. That’s the thing about this series, it is a reboot of the original “Thunderbirds” show but it also acts like it may be a sequel. Maybe this all makes sense to those who watched the old show, but to a newcomer it’s very hard to get a handle on. Clearly I’m not the target audience for this. If I had to say what this feels like, it reminds me of the shows on the Nick Jr or Disney Junior channels just without an obvious moral message (aside from helping others is good). I will say this, it does strangely make me want to try to watch some of the old 60s show if for no other reason then for curiosity. Also the music is pretty fun in a cheesy sort of way. I even found myself humming it to myself while at work.

I have no intention on watching this again. Though I could if say one of my younger siblings or nephews got into it. But credit where it’s due, it’s not something horrible, more a case of just not being my cup of tea.

Fans (as evidenced by other reviews) will probably dig the show. While newcomers like myself will probably have a difficult time getting into it. Will a modern audience of children get into the series? It's hard to say, but I have my doubts that this would have been a show I would have watched. Even for a kids show this feels a bit shallow. I could see very young audiences become fans, and as far as kids shows go it's not something that I think would be bad for them. I give it 2.5 stars out of 5. 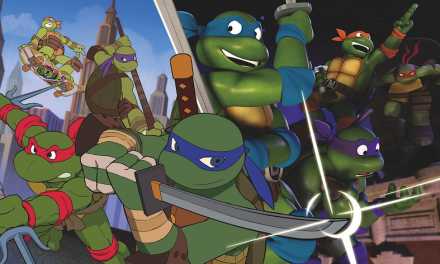 Jerry Anderson amazing 60s tv program maker. Could go in office ask for money and slot he get it. This is Jeff tracy an ex astranort started a rescue organisation after a acsident in family. A film was done by some one silly it was Rubish live action you could see how bad it was Jeff tracy must have died in this one and brains is done by someone different. This is important cus Parker is done by the same man as in 60s show. I never got point of lady panelipy but probly helps finance and secrecy of ir… Read more »

It is great to have a new commer rate series.

Cus I no jerry Anderson stuff so I bad and lot uk.

If you have seem original series you can see why it is done the way it is so I would give it 8.5