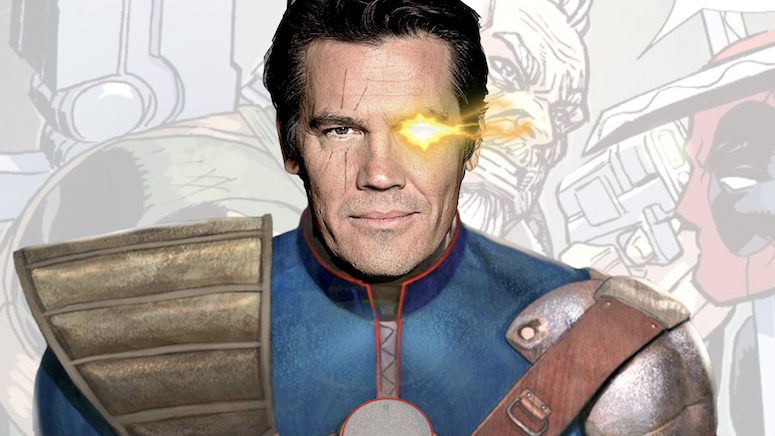 It’s Jonah Hex! No, It’s Thanos! No, It’s Cable? And, Josh Brolin just bagged another superhero role for the books in “Deadpool 2.”

Thanos won’t be the only Marvel comic persona Josh Brolin will be bringing to the big screen in 2018. The long endured internet speculation stops today as Josh Brolin is tapped to take on the role of Cable in the hotly-anticipated “Deadpool 2.”

Just as fans begin to settle into the thought of “Man Of Steel’s” Zod actor, Michael Shannon, playing the grizzled mercenary from the future, Brolin comes out of nowhere and bags the role of Cable. That’s right “Sicario,” “Men In Black 3” and “Old Boy” actor Josh Brolin has RKO’d the long list of rumored potential players, trouncing big names from Brad Pitt to former “Bond” actor Pierce Brosnan.

Again, it’s a bit miraculous that Brolin will play not one, but TWO different Marvel comics adapted characters on the big screen in 2018, simultaneously playing both Cable in “Deadpool 2” as well as Thanos in “Avengers: Infinity War.” The reason possibly lies in the fact that two different studios, Fox and Disney respectively, own the two properties. Also, “Avengers: Infinity War” is already filming and “Deadpool 2”… well, they JUST cast their Cable. Does this mean Disney and Fox are coming to some sort of accord for future Marvel movies, or is Thanos gonna get killed off at the conclusion of “Infinity War?” I guess the internet has something new to speculate about.

Brolin has proven himself as both a fan favorite and a box office breadwinner, thus leaving no doubt he will bring nothing short of his A-Game to the “Deadpool” sequel project. According to an exclusive report by The Hollywood Reporter, Brolin is signing on for four films and will likely begin shooting the current installment in Vancouver starting sometime in June.

A returning cast of Ryan Reynolds, T.J. Miller, Brianna Hildebrand and Karan Soni, along with newcomer Zazie Beetz as Domino, will hit the theaters sometime in 2018 for “Deadpool 2.” The film will be directed by “John Wick” and “John Wick: Chapter 2’s” David Leitch.

First reported by: The Hollywood Reporter