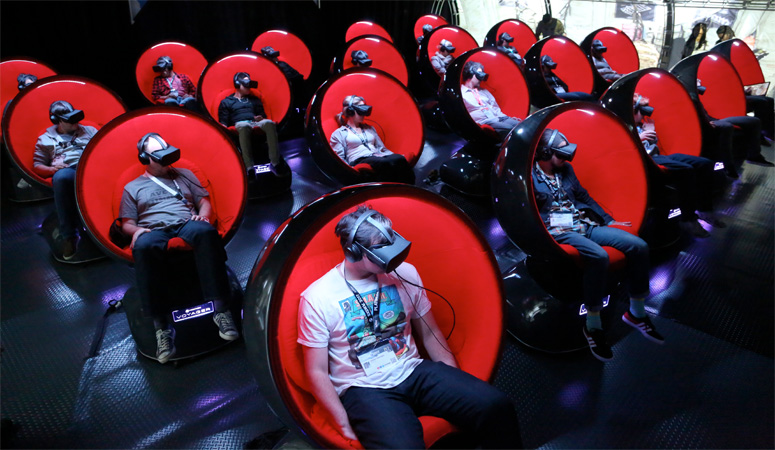 Universal Pictures unraveled an elaborate immersive exhibit during the South By Southwest Film Festival earlier this year. This gave industry professionals, select press, and eager fans a sneak peek at how The Mummy shot a key scene highlighted during the massive advertising campaign.

I had the opportunity to experience the virtual reality exhibit and it was a major highlight of the film festival/conference. This was a perfect blend of technology and movie promotions. Even though it played at CinemaCon and made its rounds at various events, it was ideal to watch The Mummy VR Experience at SXSW.

You can’t always say this about SXSW events, but standing in line was worth the wait. A group of 20 people gathered into the first room to watch a brief clip from The Mummy as well as a behind the scenes featurette. Once we walked into a life-sized full replica of a cargo plane with a mummy’s tomb, we walked to a VR seat to watch a short (less than 10 minutes) video.

The plane crash scene shot inside a zero gravity aircraft with actors Tom Cruise and Annabelle Wallis was a thrilling technical achievement that the cast and crew worked on perfecting. Viewers were treated to a 360-degree behind-the-scenes where viewers felt weightless but could go through the jarring motions of being on the set.

Participating in “The Mummy Zero Gravity Stunt VR Experience” was one of my highlights of the SXSW film festival. My favorite part was the ability to see the crew have the challenging task to shoot a few second in an uncontrolled environment. You can see up close how hard the crew had to maintain their physical balance and professional demeanor to pull off the best shots! Have you ever wanted to know how scenes were constructed? This was a great way to find out how they made the movie. That is a cool way to experience it.

This is difficult to explain, but you needed to watch it to fully understand this. I wasn’t watching Cruise and Wallis, but watching camera operators, key grips, and stunt coordinators work under pressure to get the perfect shot while being out of the sight of the camera. More on the future of VR in a different post, but I think this VR experience would’ve been perfect to show before or after the latest version of “The Mummy.”

The Today Show had an extensive peak of the exhibit last month here: