Andy Kaufman was a weird guy, Jim Carrey is also weird which made him perfect to play him.

Netflix has recently created a new documentary about when Jim Carrey portrayed Andy Kaufman in Milos Forman’s “Man on the Moon.” As you hear in the trailer this is taken from behind the scenes footage of the filming. Supposedly the studio did not want the footage released for fear of it painting Carrey as a jerk and hurting business for the film. Now years later we get that along with Jim Carrey’s own musings on his performance. 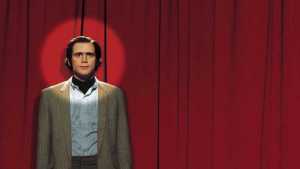 This is one of those cases where to fully review this film I have some other subjects to cover before we move forward. First, the movie that this is all centered around, “Man on the Moon.” It’s a great biopic. It may not be discussed much lately, but it really is one of Jim Carrey’s best performances. Luckily you don’t HAVE to have seen the movie to follow this one. Still it sucks that it’s not available on Netflix Instant View. I’d say it doesn’t dive all that deep into Andy Kaufman himself. They talk about him plenty in the film, but it’s one of those things where they don’t hold your hand. So it’s best if you have at least some basic understanding of Kaufman beforehand. If you don’t, then I’d suggest “Man on the Moon” as a good starting point. But then we get right back at my first point so that’s my first complaint right off the back. However, if you already know Andy Kaufman you’re safe to jump in.

Andy Kaufman was a strange guy. He obviously could be very funny (“Taxi”) and made a lot of people laugh, but that didn’t seem to be his ultimate goal. He liked everyone being confused. Performance art seemed far more important for him. Jim Carrey on the other hand is a much more mainstream kind of comedian and human cartoon. Still, he did seem to get Kaufman at least on some level. Since this is a documentary and thus is structured differently from a regular film you may have noticed I’m doing this section a little differently. My only other complaint is that it’s only Carrey being interviewed. We do some different voices, but it’s all people who were talking to the behind the scenes camera. That’s fine and provides some good insight, but I would have liked it if they had gotten people like Milos Foreman, Danny DeVito, Judd Hirsch, or Jerry Lawler to interview. Especially with DeVito, and Lawler as they not only worked with the real Kaufman, but also with Jim Carrey. 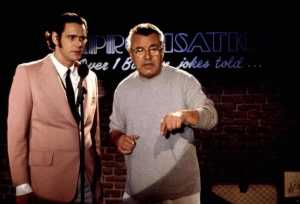 This is without a doubt the most not “on” I’ve ever seen Jim Carrey in an interview. The thing with comedians especially really wild ones (Robin Williams, Steve Martin or Will Ferrell) they’re (often by their own admission) uncomfortable being themselves. So the times you find interviews with them being relaxed can be very special. That’s the true gift this documentary gives you. We really get to hear Carrey’s thoughts and feelings and even process with his acting.

The major takeaway from this film method acting and how far you go with it. I’m of the opinion as long as it is the actor’s choice and they’re not hurting themselves (mentally or physically) or other people then it’s fine. That’s not quite what we have here. Apparently while Jim Carrey was in-character he felt the need to constantly push Jerry Lawler’s buttons. It even got to the point where Lawler put Jim in a head lock. I heard in another interview that he claims to have slapped Carrey harder than he did Andy in real-life. As “Man on the Moon” shows they were actually friends in real life.

Carrey says in the interview that he basically let “Andy” take over him and make his decisions. Everyone will have to decide for themselves whether or not that’s Jim Carrey trying to justify his bad behavior. Or if that’s really how he saw things. It all leads to questions like was this really needed for his performance? They also talk about the woman who claims to be Kaufman’s daughter who got to meet Jim Carrey on the set. With him being so into the character of Andy they got to have closure in their relationship. So even if you don’t like method acting or accept Jim Carrey’s explanation, was it really all for nothing in the end? I think this film will be a very interesting talking point in the years to come.

I often like having white noise while I work on my other projects and documentaries are often the best things for that. I can see this being one I come back to again and again for many of the reasons I already stated.

Netflix's "Jim and Andy" continues the streaming service's record of really strong original content. While there are ways I beat you could make this better it is still a satisfying experience. Most importantly it really gives you a unique window into who Jim Carrey may be as a real person. If for no other reason for than that I'd say this is a must for anyone. I give it 4 stars out of 5.