So are you tired of seeing articles talking about the recent “Deadpool” movie? Too bad here’s another one!

“Deadpool” won the hearts of fans and non-fans alike, the box office, critics and… everyone, let’s just say everyone at this point. In many people’s opinion a large part is due to how accurate the film was to Deadpool himself in character and visual design. Sure many things can be more important than getting the look right, but it’s always feels like a good indicator that the filmmakers want to really make the best adaptation possible when they do. Another interesting thing to do is seeing other versions we could have gotten. Most are aware that Robert Rodriguez was wanted for the director’s chair for some time. Less well-known is “Kick-Ass 2” director Jeff Wadlow’s attempt. 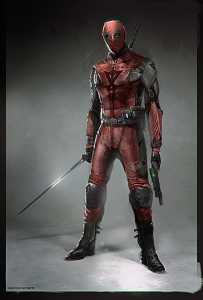 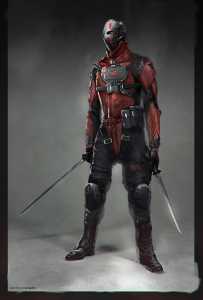 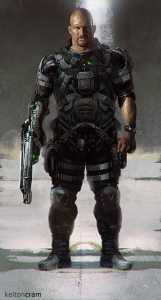 Done by professional conceptual artist Kelton Cram whose work includes a lot of popular modern movies including comic book ones such as “Amazing Spider-Man” 1&2, “X-Men: First Class”, “The Wolverine”, “300: Rise of an Empire” and most recently “Batman V Superman: Dawn of Justice”. So the man has worked with comic book characters accurately and non-accurate before. Like so many things like this, it depends on the director and what sort of look they’re looking for. The first one looks mostly like the comics, not sure what the chest symbol is all about but for the most part it looks like what we eventually got. The second one is an interesting look for a character, just not for Deadpool himself. It was meant as an “origin” suit meaning it would have been his first try at a costume and eventually ended up in the costume we’ve all come to love. One disappointing feature lacking in these is the white eyes that quite frankly took us way too long to see on-screen. The third one is so out of left field which makes sense since it was supposed to be for a villain, specifically a Marauder.

Personally, I find these rather odd that they felt Deadpool’s costume needed a gritty redesign considering he (as we saw in the film as released) has a fairly easy costume to translate to film. Still it’s interesting to see what goes into the pre-production of films. Also, something to remember is that this was just from a pitch and had Wadlow gotten the directing job it’s very possible these designs would have evolved over time.

This article was first reported by Comicbook.com

What do you think? Would you have liked to have seen these costumes in the movie?