Iron Man.  Spiderman.  Wolverine.  Captain America.  Thor.  What do all of these beloved marvel heroes here have in common?

With Stan Lee’s possible leak of a forthcoming Black Panther movie it seems like an appropriate time to reflect on Marvel’s history of dealing with Black characters.

The Marvel comics as we know it today was founded in 1961, a time when our country was staunchly segregated.  Much of the struggle our country faced can be felt when reading these early comics, and I doubt I am alone in feeling that Marvel has always been a beacon of progressivism and hope.

In 1963, the year Martin Luther King Jr. led a march on Washington, we were also introduced to a new group of minorities who were feared and ostracized for being different.  The struggle of the X-Men resonated with the struggle of our country at the time, and Marvel helped lead the way for minority characters in fiction. 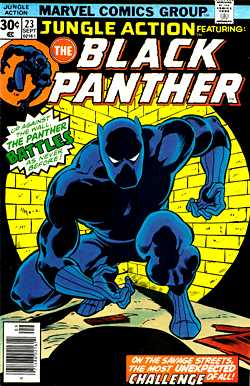 T’challa, also known as the Black Panther, was introduced in Marvel in 1966; this is the same year that the Black Panther Party was officially organized in the United States.  It is no coincidence he is a character who struggles between leading his own people with their traditions of isolation and integrating them with the rest of society.

Marvel also gave us Luke Cage in 1972 at the height of what some call Blaxploitation.  Whether or not we agree with his early portrayal and disco shirt we can still all agree that a favorite superhero of many emerged from this trend.

One of Marvel’s greatest triumphs was giving birth to our first mainstream Black female superhero.  In my opinion, Storm is one of the most complicated, noble, respectable, powerful, and sexy superheroes ever.  Just think about an origin that combines being an orphaned street thief superimposed on being worshipped as a goddess added to overcoming persecution as a mutant.  To the dismay of me and probably many more, her portrayal by Halle Berry has continued to shrink in the cinematic world and has never been given the depth she deserves.  This now brings me to the current Marvel minority portrayal in popular culture.  Many forget that the first successful marvel character to hold his own cinematically was Blade (1998).  It has now been a decade since leather laden Wesley Snipes was a leading minority superhero, and we need color on our screen now more than ever.  Think about it, we have more recently had a Black President than a Black superhero movie.  This fact is such a bother to me because of the rich history Marvel has given to Black heroes.

We have always appreciated that Marvel had so many prominent minority characters so that is why we have the expectation that when at the peak of the Marvel cinematic boom we have a Marvel movie featuring one of these characters.  Ant Man is in production and Dr. Strange has been announced, so it is far overdue that we get this confirmation for Black Panther.  I think all of us are ready for Marvel to return to its roots and lead the way for minorities in film like it has done for comics in the past.

I think you shed light on an issue that has been ongoing in the comic world for quite some time. However, I think the more interesting debate revolves around the discussion of “why” these superheros have not been given the opportunity to be the leading role for a film. Is it because white superheros were more appealing to the general public when Marvel first developed and, therefore, minority superheros were not developed as well? That’s probably not it. Given your great account of the complexities involved with developing the character Storm, I would venture to say that it must be… Read more »

I agree with you on these points. I guess what I was trying to push through most with this post was that Marvel has historically been on the front lines of leading minorities into our popular culture and they need to pick back up on this trend moving forward with their film-making. If I get some free time I plan to put out some other articles focusing on other minorities in comics we all want and need to see.

The idea of Black Panther getting a movie makes me cringe. He is exactly the type of Black superhero that should not be encouraged. His whole sense of being is based on his race. Storm, Green Lantern(John Stewart), Aqua Lad, Blade. These are heroes where their race is only a small facet of their character. These are the type of multidimensional characters that are appealing to read/watch.