Most of my stories of movie watching involve my dad, but for ‘Planet of the Apes’ I associate it with my mom.

We happen to catch the original “Planet of the Apes” on TV. Afterwards, we decided to pick up the other films. Over the course of the following weekends we slowly bought the other movies. So with the new film currently in theaters I thought it may be fun to do another one of these ranking guide articles to celebrate. We have a lot of films to get through so let’s get started. 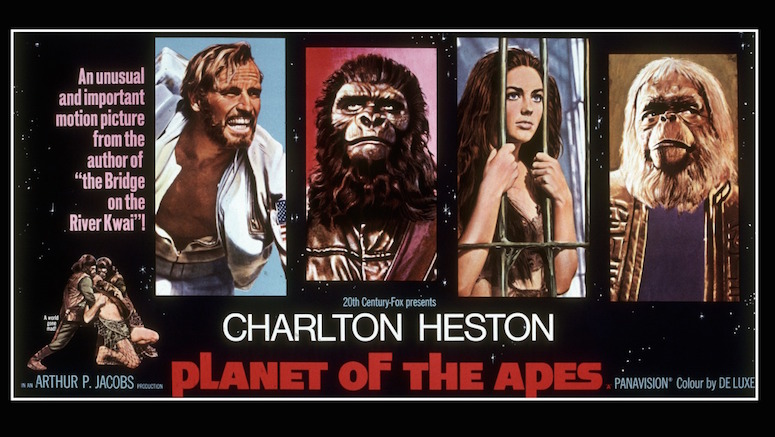 Honestly at this point what can be said about the original “Planet of the Apes?” It is rightly considered a classic with one of the all-time great twist endings, endlessly re-watchable, groundbreaking effects and a story that balances big ideas with accessible fun for any viewer. I’m trying to think of some issues so people don’t think I’m just emptily gushing over it, but I truly can’t think of anything that seriously bothers me. I suppose some of the effects don’t hold up perfectly. I mean basically of the things to do with the space ship from the design of the shuttle and space suits looks like something out of a B-movie with only a SLIGHTLY higher budget. But really if your only complaints of a film are designs like that then you know you’re in otherwise good hands.

Eric’s advice: You really want me say it?! You can’t already tell? Well then, go see it! DUH! 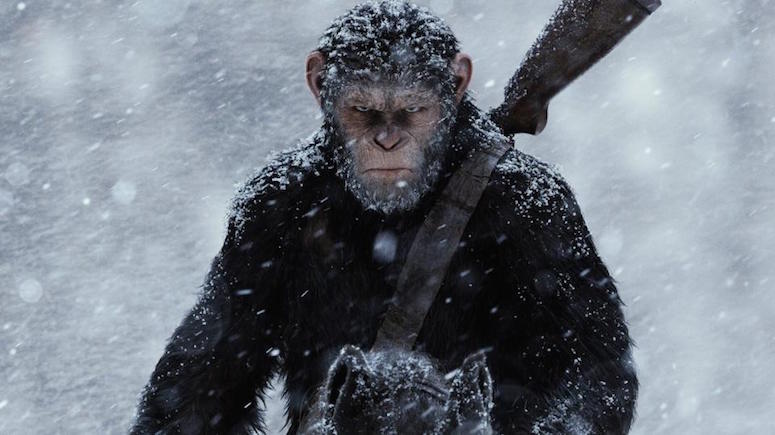 Currently in theaters and it’s going to hard to discuss. Partly because I don’t want to spoil it, but also because like the original film not totally gushing over it is going to be challenging. It really is that good. Although I’ll start off by saying that it is quite amazing how much the trailers LIE about this movie. What is even more interesting is how much it didn’t bother me because the film itself ended up being much better than the theoretical one the trailers were selling. How so? Well this is a film that seems to really take the lessons from the last films to not repeat the same mistakes. Most of the film takes place in simple locations and one kinda small prison camp. Normally this would be the tell-tale signs of a forced reduced budget, but it never feels that way. It feels like this just happened to be the story they wanted to tell to conclude the trilogy. The score is great even though there isn’t a memorable main theme to this to be an instantly recognizable piece from the film. Despite that I’m already planning to listen to the soundtrack ASAP. We all know Andy Serkis is amazing and deserves an Oscar, but wow the CGI in this film… This is without a doubt THE BEST CGI I’ve seen in a film. With the exception of a few moments it is photo realistic. I felt like I’m watching impossibly well-trained apes.

The weird part is that moments that don’t look great are things CGI normally does really well like blue screen composite for backgrounds. I guess they wanted to focus all of their time and energy on the characters. Lastly, if there is one thing this film really has going for it it’s how it tells its story. It never feels overcomplicated or overly simple. It tells it story mostly in visual terms without much dialog yet the film never feels slow. What didn’t I like about it? I can’t really think of anything other than it made me question whether or not a horse could support a gorilla riding on its back. Even their callbacks to the original series are at that perfect level of cool for older fans like me, but never standing out too much. This and “Dawn” are why I’m so pro “remake not so good movies that had great potential over good movies that don’t need remakes.” Never of those two are remakes of any of the previous series films. Although, together they take a lot of ideas and concepts from “Battle For the Planet of the Apes” (which spoilers is going to be very low on this list) and uses them to make a great film.

Eric’s advice: Films like this deserve all the support they can get so by all means go out and see this one while you still can. Show Hollywood we can be smart with our big budget action films.

3.) “Escape From the Planet of the Apes” 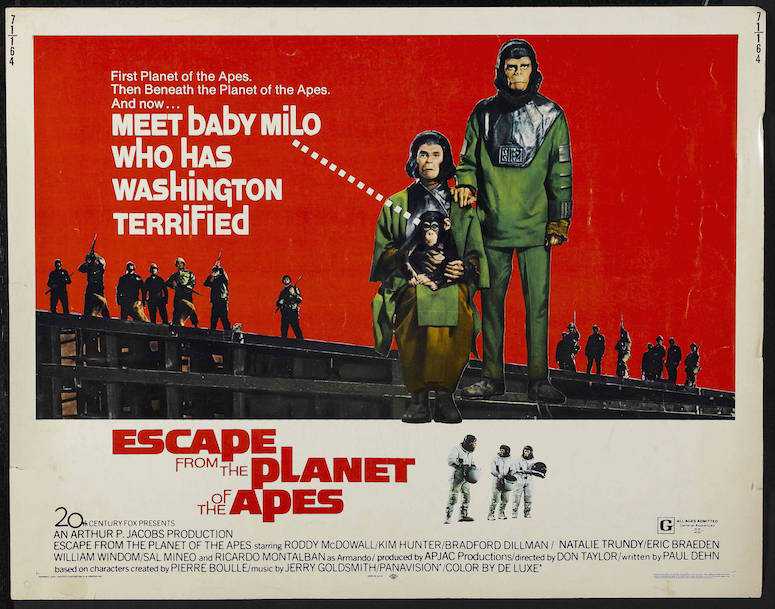 After the last film, FOX thought there may still be enough interest in one more film. Taking the original film and essentially just doing a role reversal they created the best sequel of the original series. The story is that SOMEHOW Zira and Cornelius (I guess immediately after they went off-screen in “Beneath the Planet of the Apes”) fix the spaceship with another ape, Dr Milo and go through the same wormhole that transported Taylor to the future. This time it sends them back to the (then) present. It may come off as them cutting corners, but the fish out of water story is interesting. This is a turning point for the series as it is from this point on the focus of the plots shift to the apes. It’s a bit like “Edward Scissorhands” where the 1st half is basically a comedy, but the second half becomes a tragedy. While I have to admit “Dawn” and “Rise” are probably overall better made films I still like this one a little more. It’s also the film that establishes the lore the series. Mind you it doesn’t make sense why Zira and Cornelius know it because even in the last film they still didn’t completely believe Taylor and much of the history was hidden. I guess they went through Dr Zaius’ office and found whatever means he had to know the truth about the ape’s past before joining Dr Milo with the spaceship.

Eric’s advice: I’ll understand if you don’t enjoy this as much as the newer films but any fan of the original should check ATLEAST this sequel out.

This is the film that changed my mind on the reboot series. I was still looking down on these movies, but rented it from my local library. Despite my own thoughts it had gotten very good reviews. I watched it and it really clicked. The “oh so subtle” references to the original were toned down. It does a good job portraying this conflict between man and apes that is just barely working enough that you almost have hope this will be the first Apes film with a happy ending, but you know it cannot. However, what I liked about it is that when the relationship does fall apart it feels natural and while I’m disappointed certain characters like Gary Oldman and Koba mess things up I always feel like it makes sense.

The struggle for Caesar is quite well-done as is a very effective cameo from James Franco. Although you have to feel for the director of “Rise of the Planet of the Apes.” The last attempt at restarting the franchise from one of the most famous directors ever failed miserably. Yet, this guy completely reinvigorated the series. Then for whatever reason he didn’t do the sequel and Matt Reeves took over and not only gets all the credit/praise, but even got offered the new Batman movie. I imagine him sitting alone in a bar and whenever someone starts talking about how good the new Planet of the Apes movies are he’s like “I started that damn franchise! Matt Reeves would have nothing without me!”

Eric’s advice: If you weren’t sold on the last film this may very well change your mind as it did for me, give it a watch. 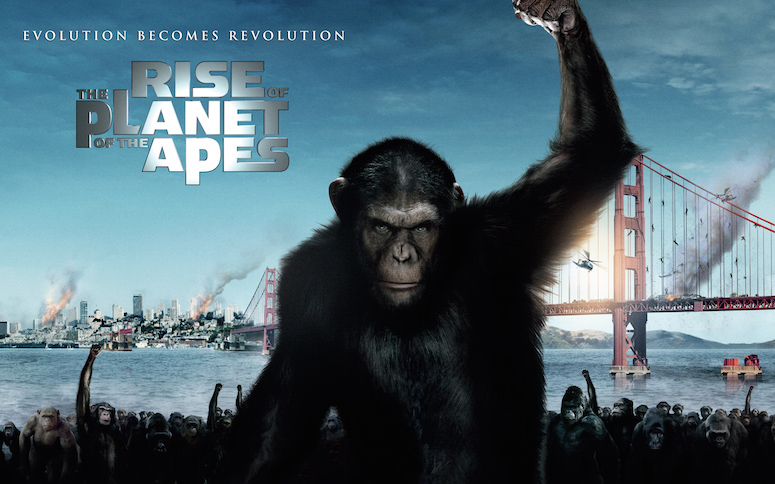 I was burnt-out on the prospect of new “Planet of the Apes” films when this came out. So, I skipped it. My stepmom later rented it and I took the opportunity to watch it. When I think back to the film mostly all I remember are the bad parts. Sure I remember the well-done drama of Caesar being ripped from his family and Andy Serkis’ fantastic performance. However, mostly what I think of when I think of this film are the moments like when they crowbar the “take your stinking paws off me you damn dirty ape” line. There are a couple of problems here. First, this is the scene where the relationship between ape and human officially change. This is where Caesar defiantly says “No!” They ruin this moment by putting in that reference. The sad part is that the Burton reboot did this too and it sucked there. So they really should have known better.

Lastly the line itself despite how famous it is, is a clunky line. Why did it work in the original? Well party from the insanity of the world established up to that point and partly because of Charlton Heston. Heston was a very good actor, but there was an over-the-top quality to his line deliveries. That’s what you need to make a line like that work. In a film that’s trying to be realistic when Tom Felton says it (because of course it would be Malfoy’s dickish behavior that would cause the monkey uprising) it doesn’t sound natural. If an ape grabbed your arm would you call it a “damn dirty ape?” And there are other little moments like that throughout the film that stick in my head. So years later when I looked back at my original rating I was shocked that I had rated it so high.

Eric’s advice: While it may have moments of silliness it overall works and really got things started again. May not be worth owning, but renting certainly.

Click to see where the remaining films stack up!