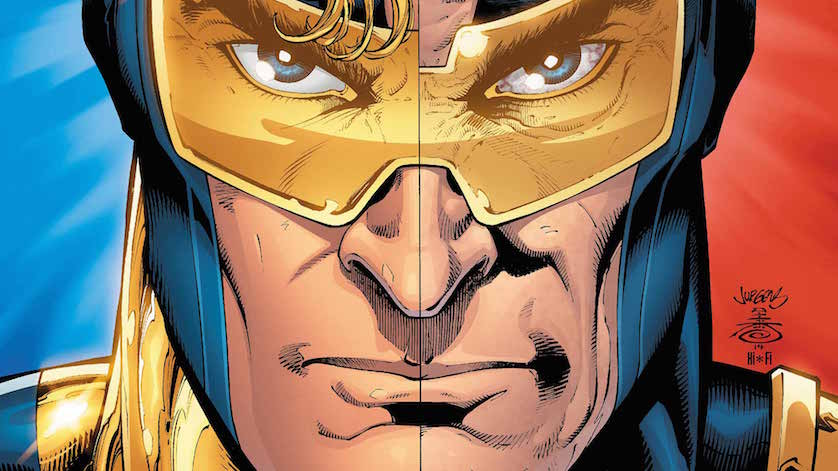 Deep Cut DC fans rejoice, rumor has it that a Booster Gold and Blue Beetle buddy movie may be on the road to joining Warners’ cinematic universe.

According to an exclusive report from Tracking-Board.com, Greg Berlanti is alleged to be in talks to direct a Booster Gold and Blue Beetle superhero comedy/buddy movie to join the Warner Bros. cinematic film family. The difference is, that this film will bring a more light-hearted and comedic vibe to the universe, contrasting the ultra dark Zack Snyder helmed “Batman V Superman: Dawn of Justice.”

Warner Bros. has already alluded that both the Ezra Miller lead “Flash” and Dwayne “The Rock” Johnson’s Black Adam-centric “Shazam” will have a lighter feel, which is inline with the source material’s tone in the comic book medium. This may be a smart move on behalf of Warners who has seen Marvel/Disney do extremely well with their more colorful and humor laden films.

But rumors always need to be taken with a grain of salt, so don’t get too excited yet. Berlanti, who is the executive producer behind the recent DC small screen universe (“Arrow,” “The Flash” and “Supergirl”) attempted to launch a Booster Gold television series on SyFy some years back to no avail.

Check out FilmFad’s exclusive interview with Booster Gold creator Dan Jurgen’s as we talk about Booster’s origin, purpose, and Berlanti’s former attempt at bringing the character to the screen.

According to Heroic Hollywood,

Screenwriter Zak Penn is being eyed to write the screenplay for Berlanti. Zak Penn wrote X-Men: The Last Stand, The Incredible Hulk, and came up with the initial story for Marvel’s The Avengers. 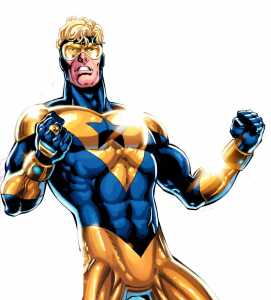 Back in the 25th Century, Michael Jon Carter, later know as Booster Gold, was a football champion and sports celebrity until he became publicly shunned after being caught betting on the outcomes of his own games. With his career washing down the drains and his reputation completely eroded, Carter breaks into a museum and ‘Boosts’ high powered relics including: a Legion of Super-Heroes flight ring, Brainiac 5’s force field and Rip Hunter’s time machine. With his security robot companion Skeets equipped with a detailed knowledge of all past events, Carter assumes the mantle of Booster Gold and travels back in time to our present day with the vision of regaining his fame as a superhero. Although initially self-serving and arrogant, Booster ultimately learns what it means to be a real hero.

When the not from this world Scarab technology was sent to Earth by an ancient galactic race, it was intended to find host to assimilate and use to take over the planet. The Scarab fuses with it’s host becoming an armored battle suit giving it’s host superior powers of flight, super strength and various projectile type abilities. But when the Scarab is damaged en-route to earth, unassuming El Paso based Teen Jaime Reyes fuses with the alien tech while his consciousness remains intact. This symbiosis allows Reyes to use the suit to seek peace and justice as the Blue Beetle.

Members of the Justice League, Booster Gold and Blue Beetle team-up in the comic books on what are often comedic or more-lighthearted mis-adventures. With Booster Gold being a HUGE personal favorite, I am curious to see if the tidal wave of box-office busting superhero cinema will pave the way for the often times conceited man in midas.

What do YOU think? Will the whimsical Booster Gold and Blue Beetle make it to the big screen bringing a balance to the seemingly ultra-dark DC cinematic universe? We want to know, so tell us in the comment section below.