Kacy Catanzaro left adoring “American Ninja Warrior” onlookers awestruck, with a highly impressive performance at the 2014 finals in Dallas. She will be making her way  to Las Vegas as the first woman in ANW history to qualify for Mt. Midoriyama.

NBC’s athletically demanding competition series pits super-athletes against some of the worlds most challenging obstacles. It’s no surprise that a bulk of the competitors are well versed in mixed martial arts, parkour and/or gymnastics.

Enter Green Arrow, or more accurately Stephen Amell of the CW’s increasingly popular “Arrow.” It may not be well know, but Amell actually performs a good 75 percent of his own stunts. If you are a fan of the show, you should not be that surprised. The often shirtless athletic actor has an apparent penchant for pushing out dialogue amidst rigorous exercise scenes.

She posted the following on Amell’s Facebook video’s thread:

“his form is just tip-top. Maybe he could teach me some things. I wouldn’t hate that.”

Don’t ask me why I was reading through Amell’s facebook posts. It will likely make my evenings, or apparent lack there of, seem suspect. In any event, it happened and Amell obliged Catanzaro and the ANW production team shortly thereafter. 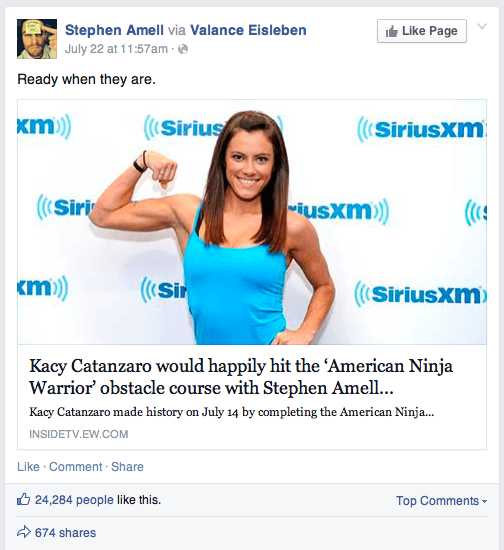 Given Catanzaro’s alleged interest in becoming a Hollywood stunt woman, could we potentially see a ANW and “Arrow” crossover in the near future? Catanzaro has definitely proven she has athletic drive, but I wonder how well she can act? I guess we will just have to wait and see what comes of this, but my fingers are crossed for something spectacular.

The CW’s “Arrow” season three is set to kick off in October. Tune in or “you have failed this city!”