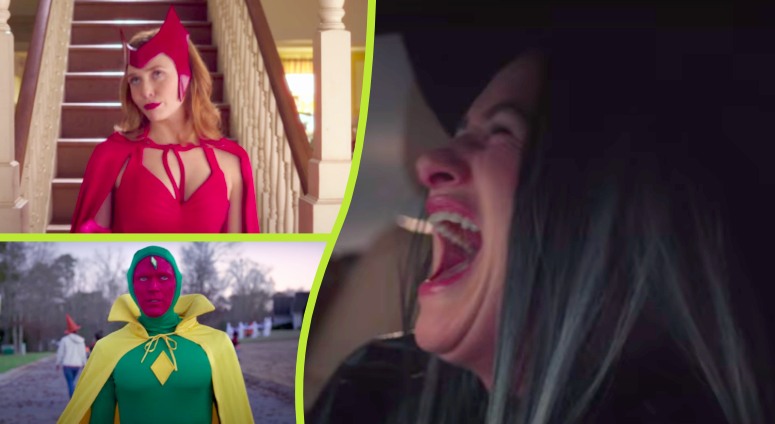 WandaVision gets its first official standalone Disney+ trailer, breaking Marvel’s long held silence on fresh content since the pandemic put a kibosh on Marvel’s 2020 film and streaming slate, potentially revealing Kathryn Hahn as the series’ villain at the same time.

Marvel’s Disney+ slate has seen some shuffling in recent months, mostly attributable to filming delays caused by COVID-19. While The Falcon and the Winter Soldier series was initially planned to be the flagship Disney+ MCU crossover series, again due to the pandemic, the delayed filming schedule has bumped that venture back in the release calendar. The result makes WandaVision the herald of the MCU as it crosses over to the Disney+ streaming platform. Fast forward and cue the WandaVision trailer.

Kathryn Hahn can be spotted only three times in the trailer, yet somehow managed to steal the entire trailer. From her crunchy and free spirited character alongside current Ant-Man (Paul Rudd) in “Wanderlust” to her polished political strategy powerhouse in the hugely popular “Parks and Recreation” series, Kathryn Hahn has certainly become a household name over the past few decades. Given her pre-existing star power and down right theft of the WandaVision trailer, it feels unlikely that she would be used for a minor role in the series.

With all cues from the trailer pointing to Hahn being a mischievous series antagonist, the question becomes – “Which Marvel Comics character will Hahn be portraying?”

Kathryn Hahn’s character in WandaVision is currently unnamed, and Hahn has been quoted saying she was cast as a “nosy neighbor.” Given Hahn’s elusive answer, what if she is actually the villain of WandaVision… and one from the comics? Hahn’s character appears friendly on the surface, but her trailer-culminating cackle speaks to a more mischievous, if not sinister, role. A quick character study [Google search] on Wanda Maximoff a.k.a. Scarlett Witch (Elizabeth Olsen) presents a clear cut idea of who the inspiration will likely be.

While there is obviously some Halloween-themed segment spliced into the trailer, the seemingly benign costume play may reveal the origin of Hahn’s character. We see Scarlett Witch and Vision (Paul Bettany) in wonky, albeit comic-accurate, versions of their signature garb and Hahn in a classic witch costume. Does that mean Hahn’s character could also be a witch from the comics? Likely.

If you are a fan of Scarlett Witch in the comics then you know that while she is deemed to be heroic, she struggles with a sorted and oft mentally unstable arc littered with moral conundrums. Enter Marvel Comics witch, Agatha Harkness. She is described as a surviving witch from the Salem witch trials in Salem, Massachusetts, nanny to Franklin Richards, son of Sue Storm and Reeve Richard of Fantastic Four, and [cue drumroll] mentor to Wanda Maximoff. Wait, there’s more [takes deep breath].

In addition to teaching Wanda how to make her powers Maximoff-icial, Harkness as a force-ghost helped Scarlett Witch get pregnant with Vision and then wiped Wanda’s memory of her children after Mephisto claimed them to be lost fragments of his soul, reabsorbing the Wanda-lings into his being… which leads to ANOTHER outlandish, yet plausible, theory on the future direction of the MCU and it’s next big bad. I suppose I can save that for a future article…

The WandaVision 6-episode series is set to debut Marvel’s Phase 4 on Disney+ in December 2020.

Do you think Kathryn Hahn will be Agatha Harkness from the Marvel Comics? Let us know in the comment section below!