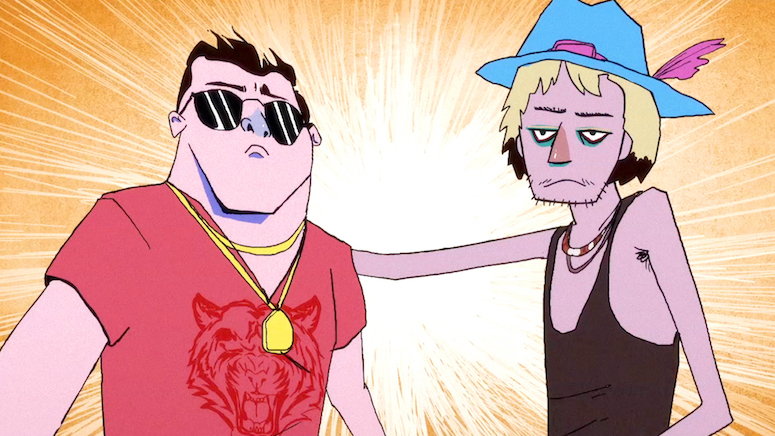 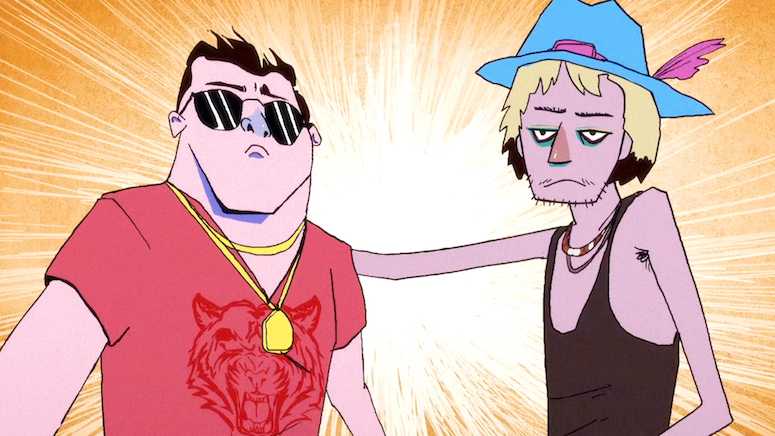 What happens when Paul Rudd, Patton Oswalt, Hannibal Buress and a bunch of other comedians team up for an animated feature? You get “Nerdland,” a bizarre train-wreck of overly-dark and cringeworthy humor… if you can even call it humor.

Paul Rudd and Patton Oswalt have proven themselves as pretty capable actors. Their humorous antics have brought joy to audiences time and again on movies and shows like Rudd’s “I Love You Man” and stint on friends “Friends” and Oswalt’s run on “King Of Queens.” Both Rudd and Oswalt  have even broken into the superhero universe with Rudd’s thimble-sized hero “Ant-man” and Oswalt’s twinning character on “Agents Of Shield,” so you would expect their segue into animated features to be a no brainer. Not so much… Read more about the cringe-inducing “Nerdland” after the jump.

After turning 30 and realizing that neither of them had accomplished anything memorable, two best friends, aspiring actor John (Paul Rudd) and wannabe screenwriter Elliot (Patton Oswalt), embark on a bizarre journey of utter delinquency in the search for success, self-identity and, most importantly, fame.

Before I dig my heels in and tell you what I think about this “different” kind of animated feature, I need to make it perfectly clear that I’m not a big fan of gratuitous violence without purpose. If you’ve read my review of the recent epic action packed sequel “John Wick: Chapter 2,” then you should be well aware that I am a huge fan of violence if done tastefully. Also, before I get into all the negatives, I would like to point out that the animation is really interesting and definitely attention grabbing. The illustrators do well to stray away from the conventional clean lines and Disney-esque polished look of modern animation, really delving into a more arthouse style with ruff lines and very vividly diverse adaptations of reality.

With all that said, however, the movie is just not that good. While relatively linear in its continuity, the plot really has very few redeeming qualities. The content is at times juvenile with a faux-mature casing, not ever really befitting the extreme lengths the story aims to achieve. This makes it very hard for the audience to ever get truly invested in the journey that the screwup duo go on.

Again, you would expect a lot more from actors like Paul Rudd and Patton Oswalt. The movie starts very much in your face almost like a cheap riff on “Grandma’s Boy,” but without any of the artful nuance an actual comedy. The extreme nature of the dialogue and darkly written jokes, if you can even call them jokes, really takes away from the entertainment quality of the film. Almost all the dialogue and plot progression points seem forced and without any real sense of motivation.

On a more positive note, I can say that the movie does well to capture the millennial mindset of entitlement, thinking they deserve something just because they may have some talent. They also pick at the advent of the Internet superstar. In other words, these two guys think the world owes them a debt of gratitude and seek to become instantly famous doing all the wrong things. Although the cast is littered with very capable comedians, the lacking script really wastes any talent that they may have had in terms of the voice cast.

Nerd land is entertaining in the same way watching a YouTube video of a horrible car crash may be entertaining. It’s not really that engaging, but so cringe inducing at times it’s hard to look away. Again, the only redeeming quality comes is the artwork. The vivid colors, bright explosions of nifty hand drawn characters and pop art text blocks make the film stimulating from a visual perspective. But, when you add in the limp dialogue and conceptually outlandish plot without any character development, it heavily detracts from the overall quality of the film. What starts as a commentary on the flimsy and dark nature of the Internet in the modern age, quickly falls victim to actually becoming a gratuitously violent and substance less experience.

While this is by no means the worst animated feature I’ve seen, and I’ve seen quite a few terrible ones, this also isn’t close to being the best. I would say it’s snuggly nestled at just below average, perhaps right at average for those who may have a darker taste when it comes to film. While some people may appreciate this animated ode to Eli Roth, the excessively violent, and at times, cringe-inducing content is simply not my cup of tea. While it may hold your attention on pure shock value alone the first time around, there’s very little the story leaves behind to take you back for a second viewing

Watch the official trailer for “Nerdland” below:

While this is by no means the worst animated feature I've seen, this also isn't close to being the best. While some people may appreciate this animated ode to Eli Roth, the excessively violent, and at times, cringe-inducing content is simply not my cup of tea. While it may hold your attention on pure shock value alone the first time around there's very little to take you back for a second viewing.