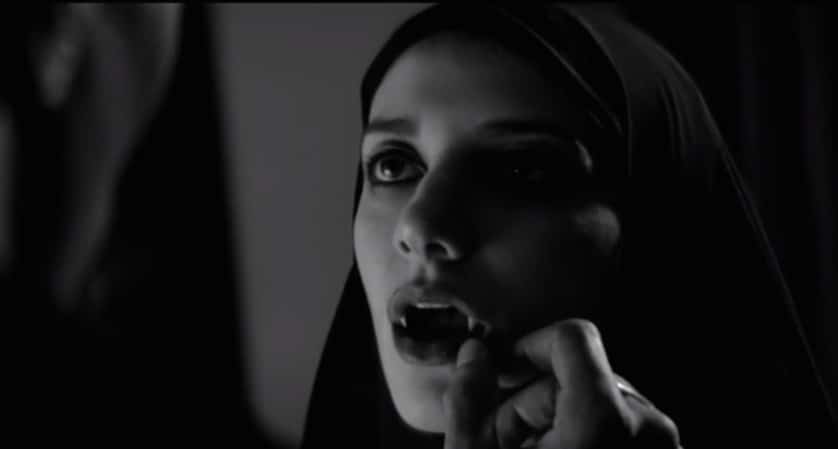 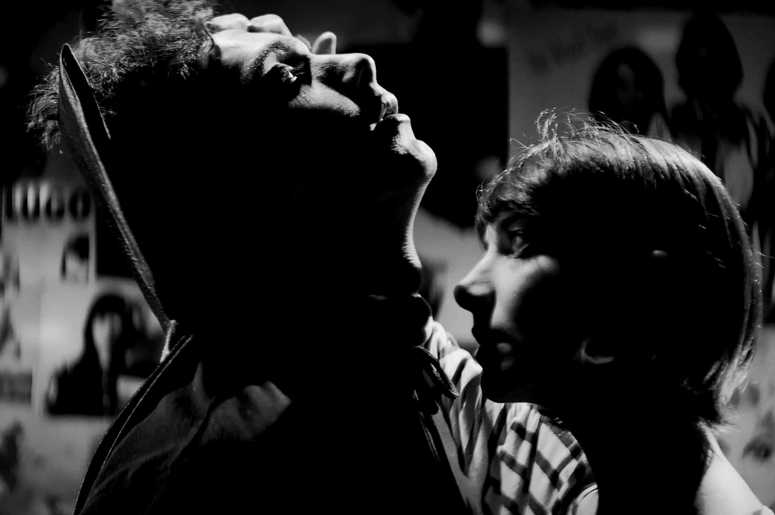 Welcome to Bad City, a fictional despair stricken Farsi-speaking ghost town reveling in fatal isolation and cast under the vengeful eye of a discontent vampire. 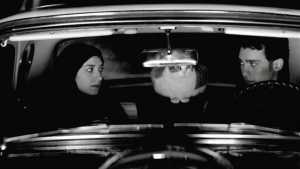 “A Girl Walks Home Alone at Night” redefines the increasingly stale and over-tapped Vampire film genre with a freshly unique and foreign language based approach. The cold harsh tones of the black and white visuals are both viciously jarring and oddly romantic at the same time.  What is billed as “a black-and-white Iranian vampire horror-western,” is something far more. In this undoubted passion project by writer/director Ana Lily Amirpour, audiences are presented with a cold, aggressive, and at times despondingly melancholy film with all of the doom and gloom appropriately accentuating the core themes of ‘Hope’ and ‘Isolation.’

Writer-director Ana Lily Amirpour’s stunning debut, produced by Elijah Wood, follows the experiences of a small town stalked by a fanged presence who’s just as, if not more, lonely than the town’s inhabitants. Filmed solely in robustly vivid black-and-white, and melding numerous genres into a singular unique and cohesive product, Amirpour finesses this enigmatic social commentary of personal hopes and desire with a modern twist. Amirpour gives audiences an amalgam of elements reminiscent of film noir with a not so subdued portrait of a discontent modern youth.

In watching the film, one sees immediate comparisons to Jim Jarmusch’s “Dead Man” featuring Johnny Depp as well as David Lynch’s “Eraserhead.” Although comparable to the aforementioned projects, Amirpour’s presentation maintains a unique and truly original appeal that cannot be subbed out for those similar films. 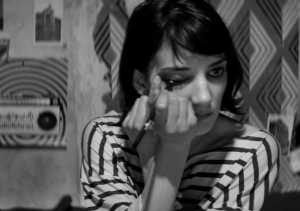 Sheila Vand was an ideal casting decision as her shadowy and seductively vengeful performance as “The Girl” breathes life into complicated and cold hearted character. While her dialogue is limited, as is with the film in general, Vand excels in bringing to life her beguiled character with methodical movement and her soul piercing stares. Her personal struggles manifest onscreen with her more mystical vampiric reactions to the archaic minded town and it’s more unsavory inhabitants. 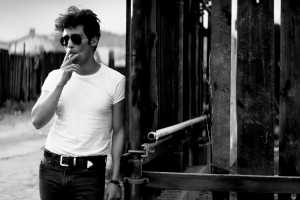 The film is only half complete until you add Arash (Arash Marandi), a young man who selflessly tends to his father Hossein (Marshall Manesh), who is gripped by a severe heroin addiction. When the low-life pimp and narcotic peddling Saeed (Amin Nazemzadeh) enters the scene to claim payment of the substantial debt Hossein has accrued, Arash is forcefully stripped of his prized classic automobile as collateral. Arash is a persian James Dean type, with his early hollywood machoism and conflicted youth persona adding emotional depth to the film. His off-beat yet unconditional romance with “the Girl” becomes the most fitting piece of this cinematic puzzle.

For those who are more culturally inclined, “A Girl Walks Home Alone at Night” discusses the authoritative aura of Iran. Primarily, the film pinpoints the intersection of the old ways versus the new as it peers into the treatment of women and an increasingly dramatic disparity of wealth (which is not to unfamiliar to Americans in the wake of the 2008 market crash).

Idiots and rich people are the only ones who think things can change.

While Arash is vexed by this presumed dark inevitability of Iranian life, by the end of the movie, “A Girl Walks Home Alone at Night” guides audiences to reject that complacent sentiment as Arash transcends the town’s presently prohibitive group mentality.

Although relatively light on dialogue, this film is so visually nuanced that audiences can find pleasure time and again finding new and different cinematic reward and societal parallels with each viewing.

It is not often to find a Vampire film that has a philosophical analysis of society, but this film manages to bring both the fangs and philosophy to fruition.

Watch the trailer for “A Girl Walks Home Alone at Night” below.

"A Girl Walks Home Alone at Night" is visually mesmerizing, philosophically fascinating and, given it's dynamic dramatics, a truly surprise laden cinematic adventure. This isn't your average fang-flick... it's much much more! A definite must-see for fans of artful cinema.