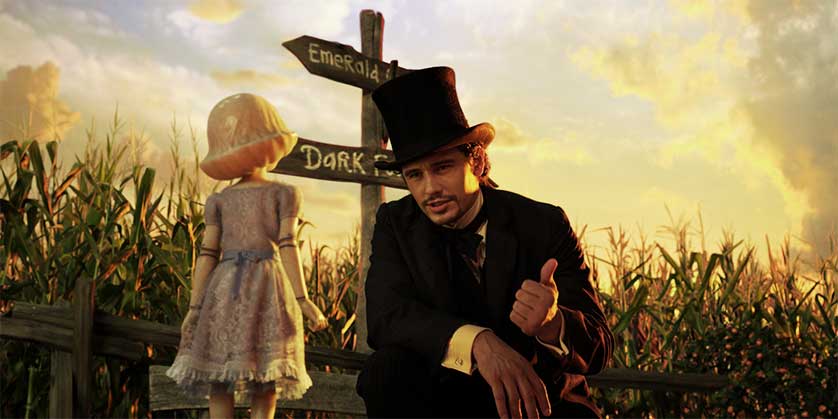 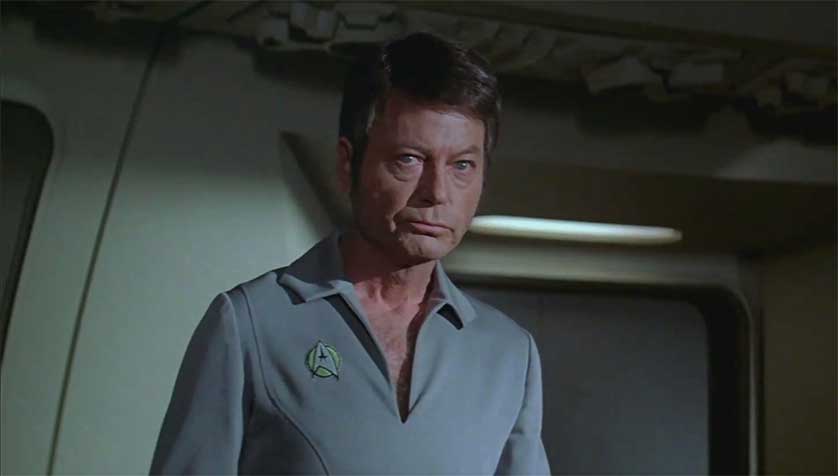 I personally think “Star Trek V: The Final Frontier” is the worst Star Trek film ever. I know all the fans have their own reasons for hating whichever film they feel to be the worst but for me this feels like a movie a monkey made. Actually it was William Shatner but he gave his best imitation of a terrible director. It’s a film that almost killed the franchise and seems to be ignored in-universe by all the characters. I REALLY don’t like this film. The film is about Spock’s long lost brother Sybok hijacking the Enterprise and brainwashing the crew to try and find God at the center of the universe. You’ve already lost me with a premise like that in a “Star Trek” film. But let’s get back to the brainwashing thing. The big idea with the villain Sybok is that he somehow (the movie doesn’t explain it well) takes away the biggest pain in your life by showing it you and that somehow gives him power over you…I think. Anyways after taking over the ship Sybok tries it on our three main heroes Kirk, Spock, and McCoy. Spock’s pain is interesting and Kirk’s retort to the whole notion is good too but the real meat comes from McCoy’s memories. In the past his father was sick with no hope of recovery. McCoy basically performs euthanasia on his beloved father. If that wasn’t hard enough, 6 months later a cure is discovered that would have saved his father’s life if he had only waited.

Why this scene? Much like the “Robocop 3” entry at the beginning, this feels like a follow-up to something that was a long time coming. Right from the original series McCoy has been a grump. His famous line, “I’m a doctor, not a ___” makes it clear that he takes great pride in being a doctor. He has a true desire to help the sick. In the previous film McCoy couldn’t stop himself from helping and healing random patients in the hospital even though they were under strict orders not to interfere in the past. This is a man who despite his gruffness, views life as something precious and here after all these years of it never being mentioned before, we finally get an answer. It of course helps that DeForest Kelley is a fantastic actor and really sells all of the emotions and pain of what this experience would bring. For a moment, this brief scene almost made me think that there was hope for the film, then the rest proved me wrong. 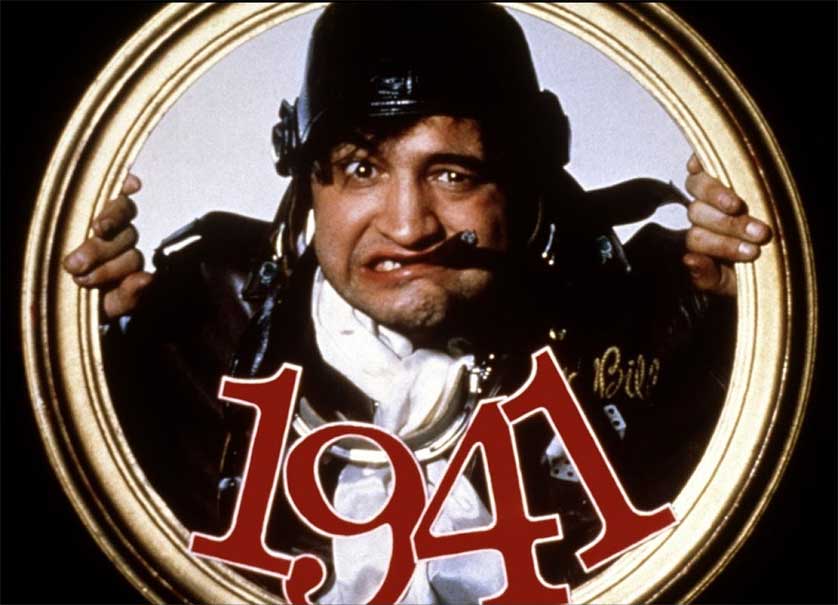 Steven Spielberg gets a lot of undeserved bashing. It comes from the fact that for most of the regular (non film fan) world he is the most famous director. That kind of fame will always engender a backlash of some sort. But he IS a great filmmaker and has added so much to the iconography of cinema. One of his many talents is action sequences. Remember the Obi-Wan vs General Grievous fight or the Yoda vs Emperor Palpatine duel in “Revenge of the Sith?” Spielberg did his friend George Lucas a favor and assisted directing them. Basically what I’m saying is the man knows how to make an exciting sequence. You may also remember “Indiana Jones and the Temple of Doom” begins with a dance scene. But that wasn’t Spielberg’s first try. Fresh off of the success of “Jaws” and “Close Encounters of the Third Kind” Spielberg was allowed to do whatever he wanted for his next film. What came out of it was a movie that had too much stuff. So many amazingly talented actors just wasted in the film. Why were Christopher Lee or John Candy in this? How do you have Christopher Lee and Toshiro Mifune as your bad guys but all of their scenes are boring?! How do you not give Toshiro Mifune and John Belushi a scene together? For that matter what happened to John Belushi? The movie just ends with him going into a Japanese submarine with no weapons so I guess I’ll assume the worst. The main character in the film is a kid uninterested in fighting in the war, he just wants to dance. After messing up with his girlfriend and pissing off a jerk of a soldier they all meet up at a soldiers only dance.

Why this scene? First of all I’d just like to point out that this is only about half of the scene in question. It’s really the build-up that makes this scene so much fun. We have the dance going on in the background as the soldier chases the main character all around the building. They both are interested in the same woman. The love interest’s heavier friend is chasing after the soldier. They piss off a bunch of the other people as they chase after one another destroying all sorts of stuff. The choreography of the background dancers is incredible. The dance would have already been pretty enjoyable (and this is from someone who doesn’t normally care for dance sequences) but it’s the way Spielberg weaves it in with what alone would also have been a pretty amusing action sequence on it’s own. They both end up complementing each other to make something pretty unique. It’s really the only action dance scene that I can think of. If this rest of the film had this much ingenuity to it then maybe this could have joined other famous Spielberg films we all still watch. 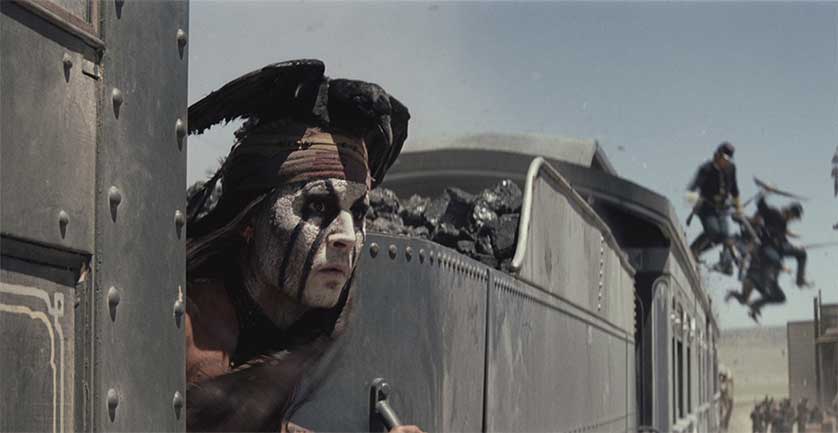 When I saw this on a date with my then-girlfriend I never had felt the urge so strongly to just yell in the theater, “LOOK, GIVE ME A LAPTOP WITH FINAL CUT ON IT AND I WILL RE-EDIT THIS MOVIE FOR YOU TO TRIM ALL THIS FAT!” Like what everyone else has said about this film, it is LOOOOOOOOOONG! And worst of all there is no reason for it to be so long. There are so many unneeded scenes or subplots that go nowhere important (I’d say go nowhere but there is payoff it’s just not normally important). It blows my mind that the director Gore Verbinski and the editor tried to make the claim that nothing could have been cut. As I write this I can think of at least 10 things off hand that could have been cut. But I can’t say I hated it all thanks to one scene and not just one scene, one important damn scene. Spoiler Alert! It’s the climax of the whole film. Nothing much to spoil or setup it’s just the Lone Ranger and Tonto going after the bad guys on a train. They’ve captured the Lone Ranger’s love interest and child. Tonto goes after the villain that wronged him (by tricking him as a boy which caused his entire tribe to be wiped out) and the Lone Ranger goes after the villain who wronged him (by killing him). What follows is one of the most “epically” fun climaxes ever.

Why this scene? Basically whenever I talk about this film to someone I always say, “Just see the final fight on the train, don’t bother with the rest. Just see that!” This climax is everything that the entire film proper should have been in one glorious place. It’s fun, it’s paced well, the William Tell Overture is played throughout, it’s humor works, oh and did I mention…it’s FUN! Seriously one of the hardest things to get people “onboard” with westerns is the fact that most people have a perception that the action is just guy fires gun at other guy firing gun. If you have seen a western or at least have a working understanding of the genre, then you know chases on horses onto trains are as standard as they come. Well how about a train chasing a train and a horse riding across then jumping from one to the other? Seriously this is something glorious to behold if you had any attachment to westerns growing up, knowing that a western action sequence could be just as exciting as anything you ever saw in other action films. The sequence is every creative child playing with their train set and action figures on crack. And oh God is it nice to hear the old fashioned William Tell Overture play throughout, not modernized just re-recorded to fit the movements of the scene and it just captures all the fun and excitement missing in the rest of the film. Throw in some references to “For A Few Dollars More” and any western fan (heck any film fan) should love it. So why isn’t this getting talked about? When doing research for this article I saw there were plenty of lists with this premise and they all seemed to focus around the same batch of films on all these lists. That was part of the fun of doing this as these are all movies I didn’t see on any of the lists. However I have no doubt that eventually after years have past, this finale will become the go to reference for great scenes in bad movies.

What are some great scenes in bad films that you enjoy?

For me, the sequence after Superman exits the spaceship in Man of Steel and he’s trying to learn how to fly and Jorels narrating. That’s a perfect scene in a far from perfect movie.

For me the best scene was where young Clark is at school and his powers are going crazy. Then Ma Kent comes to help him by doing the whole “focus on my voice.” that was for me a perfect scene that also gave me a whole respect for the Kents and what they did by raising him.