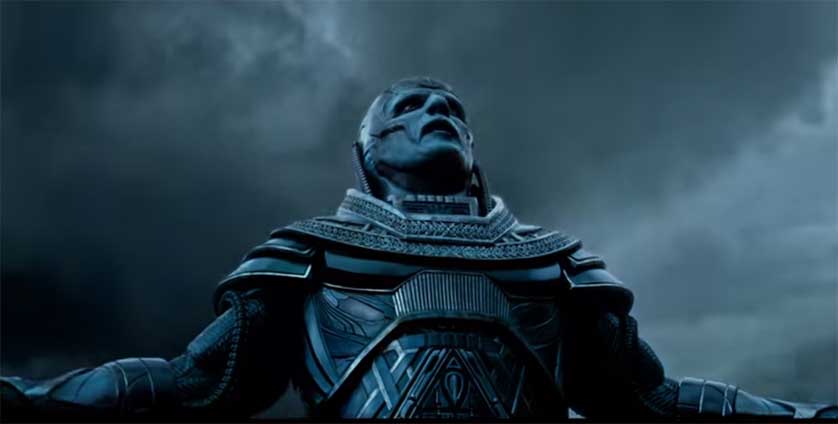 We see a flash of most of Apocalypse’s horsemen showing off their powers. Storm and Magneto weren’t as intriguing as most of us are familiar with their powers from previous films but Archangel was very exciting to see.

We have seen a previous version of the character in Brett Ratner’s “X-Men: The Last Stand” played by Ben Foster, but not in the capacity we see here. In “The Last Stand” we see Angel before he was Archangel. His wings are composed of feathers and his powers mainly consist of advanced flight abilities through the use of his wings. The “X-Men: Apocalypse” version seen in this trailer is a more manipulated version of the character.

In the comic books Archangel was the product of Apocalypse’s genetic manipulation. He started as this character that we see in “X-Men: The Last Stand” but is mentally and genetically manipulated into becoming a horseman of Apocalypse. In the process Angel is transformed into Archangel with a set of new metallic wings which have the ability to shoot poison tipped darts from them. While his face did have a bluish skin tone in the comics, it does seem that he shares many of the same powers in this film.

Many fans were wondering if they would touch on Apocalypse’s ability to change in size and from the scene above, it looks like they at least touched on it. But while it looks promising that we will see this power in the film, I wouldn’t get your hopes up.

In this scene we see Professor X standing and attempting to punch Apocalypse only to be stopped as Apocalypse grows and towers over him. The physical battle between these two leads me to believe that this is either a dream sequence or more likely a metaphorical representation of Professor X trying to invade Apocalypse’s mind. Sure we’ve seen Professor X out of the wheelchair a few times, but the likelihood of these two “duking it out” is low.

To further reinforce this idea, we see Professor X using Cerebro and talking about a power unlike any he’s encountered before. While using Cerebro, we see his eyes go completely black which could be the transition into this scene where we see Apocalypse grow.

They’ve been hinting at James McAvoy going bald for his role as Professor X since “X-Men: First Class” but now it’s finally happened! Although we do see him with a full head of hair throughout most of the trailer, the final reveal at the end is what many fans have been waiting to see. In full Charles Xavier attire, we see McAvoy rocking the bald look and it actually looks very good.

The question that many should be asking now is, “How does he lose his hair?” We see him with hair throughout the trailer so it’s easy to come to the conclusion that something happens for him to lose it in this film. I doubt he just decides to shave his head so there has to be some significant event that causes his hair to go.

As this is the point where the trailer ended, Fox has chosen this topic as a moment of speculation for fans. My guess is that this will be one of the surprises they save for the film rather than revealing in another trailer.

Tell us something we may have missed or tell us your thoughts and speculation! We’d love to discuss with you in the comments below!