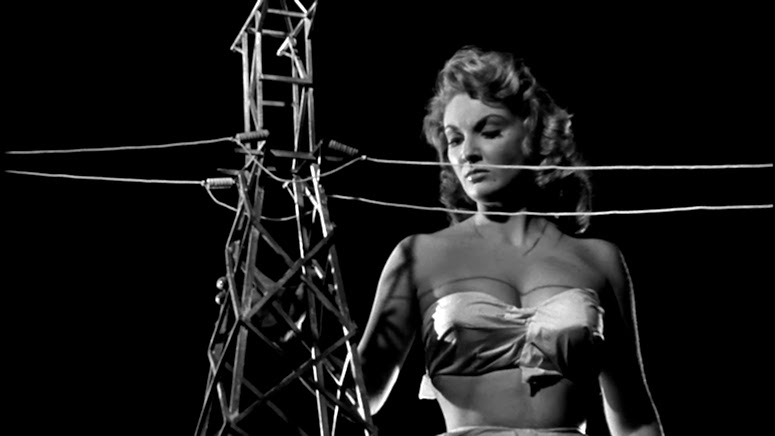 To say I’ve seen a couple of movies would be a bit of an understatement in the same way as saying a 50 foot woman is a bit worrisome.

One sub-genre of films that I’ve seen a surprising large amount of is the giant woman film. Unlike vampires or werewolves this isn’t exactly a well-represented monster. I honestly can’t even think of ever seeing a list like this on other film sites so here’s my unique contribution to film discussion. Now here’s the really interesting thing, none of these movies are really all that good. The best one is just OK, but it’s an interesting enough idea that I honestly think COULD work. Maybe one day it will. 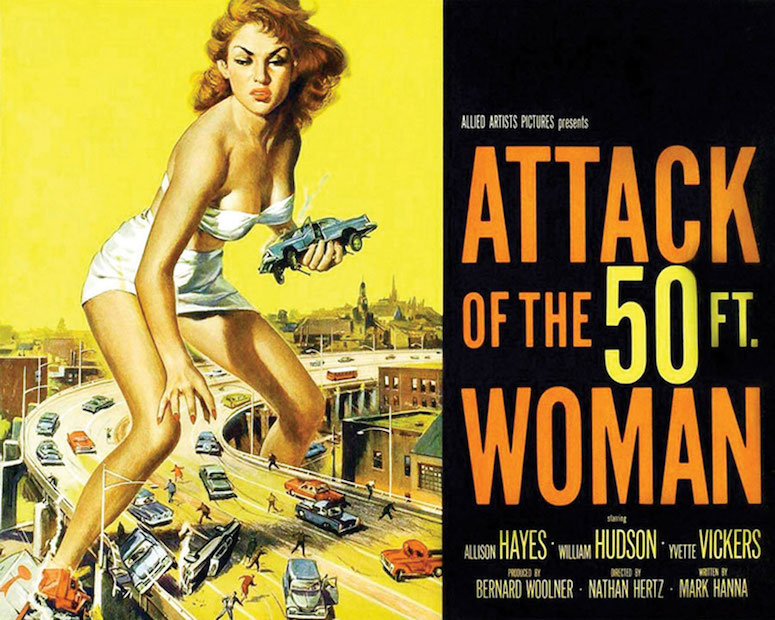 Yes the original film that started this whole damn thing and oddly enough it’s the worst one. I mean the poster is great. It is iconic and honestly probably the main reason it is still firmly in the public consciousness. But aside from some great art the film is BORING. It came about from another film “The Amazing Colossal Man” where the producers clearly thought we’ll do our version just with a woman. Well it’s not really remake. It is different, but I get the sense that it was more due to budget. Though even by the standards of low-budget sci-fi films this is extremely low-budget. As a result most of this film is just people talking about the ins and outs of inheritance laws.

You see the plot is that there’s this wealthy heiress, Nancy Archer who has a cheating husband Harry. Harry just wants to get her money so he can be rich with his mistress. After Nancy has a chance encounter with a giant bald alien, Harry thinks he can prove she’s crazy, get her committed and get control of the fortune. He humors her by agreeing to help her look for it again. She gets captured, he runs away, then she returns later barely awake. While she sleeps she grows 50 feet… without anyone noticing until they go upstairs. Harry decides screw this and goes to hang out with his mistress at the bar. Nancy wakes up and walks into town looking for Harry. She’s eventually brought down by the military and Harry and her die in each other’s arms… well I mean they both die, but he’s in her hands… you get the idea.

So all the stuff involving the title doesn’t come in until the last 10 minutes and I’m probably being generous with that. In addition to it being a slog to get through, the effects are laughable even by 50s standards. The giants are freaking see through! Oh and when they discover Nancy’s now a giant trapped in her bedroom, so they don’t have to actually show her they have a painfully obvious paper mache hand. It’s almost reaches so bad it’s funny like “Troll 2,” but is so boring it never gets there. 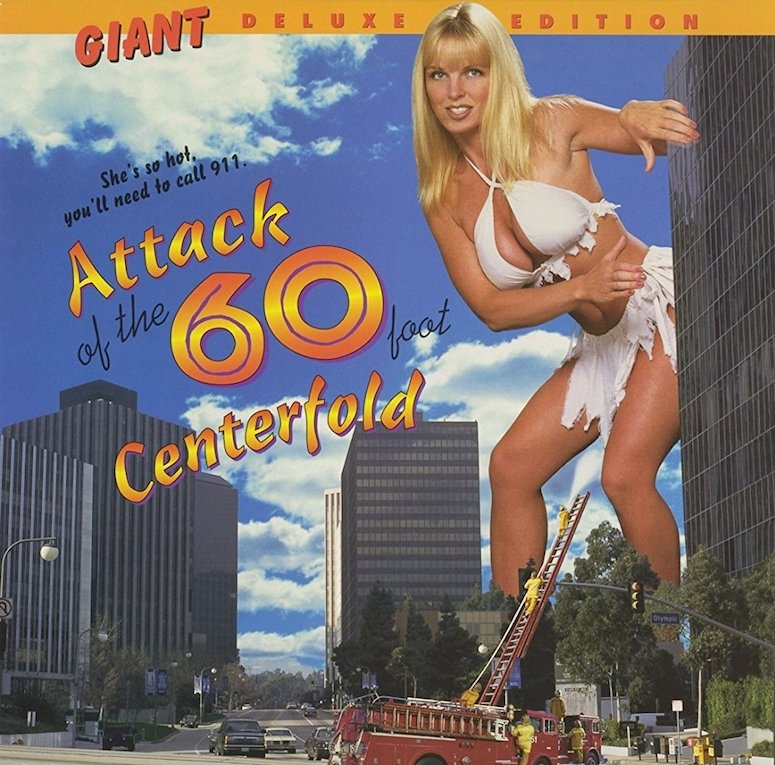 I remember coming across this in a Best Buy and being really confused. I knew of “Attack of the 50 ft. Woman,” but here was this DVD cover that looked almost the same… but not quite. I would have bought it right then and there out of curiosity, but my stepmom noticed the R-rating and promptly refused. Years later in college when I had my own Netflix account I decided to finally watch it and man, it was not worth the wait. The story is about a younger supermodel, Angel trying to make it in the business. She can’t seem to get noticed and so starts taking some experimental enhancement drugs from a scientist she happens to know. She takes too much and next thing you know she’s 60 feet tall. Her rival decides to investigate and gets the drugs herself. The two 60 foot women have a good old-fashioned cat fight all across Hollywood.

Now that may sound a little interesting especially when you consider why this film had a R-rating. Boobs! They show the women naked all throughout. I guess maybe it’s to disguise the fact they never have any interesting camera set-ups. They don’t even have enough money to composite the actors like they would in most movies like this. Instead they mostly use force perspective which I suppose it interesting, but it also limits the camera angles you can really use. It’s a LITTLE more interesting than the original “Attack of the 50 ft. Woman,” but not by a lot. This film comes to us from Fred Olen Ray a “master” of ultra low budgets. I honestly do get that this is a low-budget film, but there had to be something more interesting to fill the story with. It’s about a supermodel taking a special drug out of desperation from the industry. It seems like there would be a lot to work with an interesting way to comment on the modeling industry through the story of this woman becoming a giant. 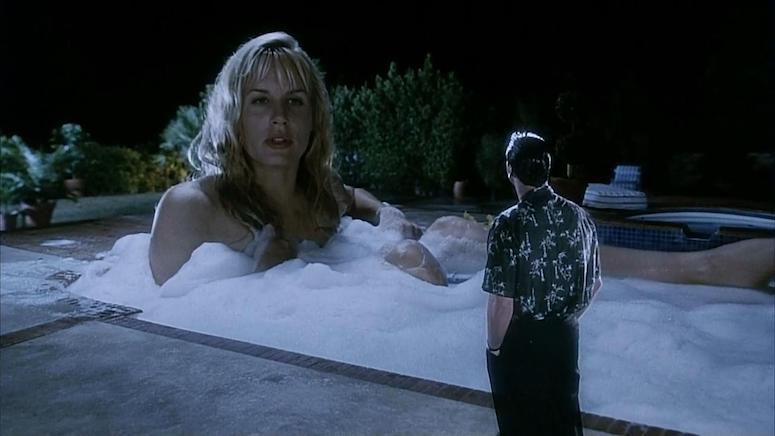 This is the film that sparked my imagination. I remember on one of our trips to Ocean City as a young kid I caught a brief glimpse on this on TV. I wonder if it was even the original airing because I also seem to remember seeing some documentary about the making of it. If so that would place this as one of my earliest of early memories. I doubt I can remember from when I was 3, but who knows. Still this film had a lot going for it. A good lead actress Daryl Hannah, an uniquely funny director Christopher Guest and the fact the original was from 35 years ago. That’s lots of time for someone to figure out something interesting to do with this story. Sadly not much comes from it. It is a faithful remake, the same plot structure is used. Although she grows about half through the movie. Sounds good, plenty of time to work with now. But sadly this film is a bore too.

As I once saw someone else describe the problem with this movie, too much woman and not enough attack. Now I of course wouldn’t want an entire film of her smashing up the town like Godzilla. She’s the main character and I feel bad for her being treated so badly by everyone. Plus, I can’t imagine growing to 50 feet tall is going to do wonders to your mental state so I get she’d get to the “Nancy smash!” eventually, but it doesn’t feel like a natural character arc. She just changes when the script says so. Other than that she mostly just lounges around talking about she’s evolving as a woman. I get it, this is all a metaphor for feminism but it’s just not that interesting listening to a giant woman talk about that before finally getting fed up and deciding to chase after her cheating husband. Even if she is using the pool as a bathtub. BTW points for at least creating one indelible image for this film.