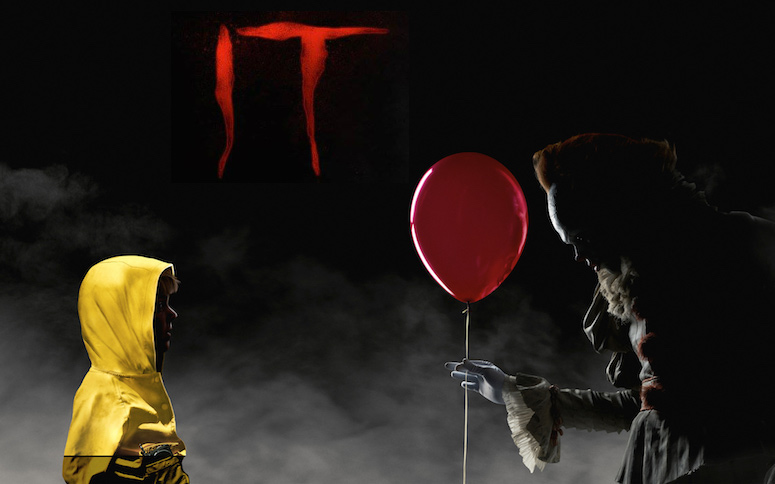 It hasn’t been a great couple of years for Stephen King adaptations. Which makes me all the happier to announce that “IT” was really good, PENNYWISE LIVES!

“IT” is widely considered one of Stephen King’s best (and longest) books. We had a miniseries back in 1990 that gave a generation of kids coulrophobia. However, I’m sorry but aside from Tim Curry it just hasn’t aged well. So let’s see why this adaptation seems to work so much better.

For those who don’t know “IT’ is a Stephen King book about an evil clown that preys on small children. It does this by shapeshifting into whatever they’re most afraid of. Its favorite form being Pennywise the Dancing Clown. A small group of put upon kids in the town come together to stop It before it kills them all and continues the horror continues again and again. In the novel this covers their two encounters as kids and adults. I’ll admit I haven’t read the entire book, but I know a fair amount of it. Also, the way it’s written (constantly jumping between the two timelines) would drive me as insane as if I were to look in the deadlights myself. As the book is over a 1,000 pages long they wisely decided to only focus on the earlier timeline for this and with the proposed sequel doing the modern timeline. So that’s the central idea kids are being stalked by a malevolent force that can become whatever they’re most afraid of and they can’t even go to their parents as It seems to not only be invisible, but in some cases has control over the whole town.

On a technical aspect this film really seems to get everything right. It is a beautifully shot film. Andrés “Andy” Muschietti knows how to compose a great looking scene from the lighting to the designs to the sets themselves. It is a slick-looking film that never forgets to be moody when it needs it. However, be warned there are jump scares. I know for some jump scares ruin otherwise good horror films and there are a number in this film. Still there still are a number of very effective very subtle moments of tension in the film. At times it can almost come across as the director is fighting against the more mainstream horror elements of jump scares and do something a little more slow burn like. However, this is a big-budget horror film that is trying to appeal to a mainstream audience and for making its money back it kinda needs that.

Though fear not because it is the story and characters that make this film shine. I’ll go into greater detail about that in the next section, but I will say that the young actors playing the kids are very well-cast. I never felt taken out of the film with their acting other than Bill’s stutter which I’m not going to judge the kid too harshly because even for adult actors a stutter is hard to make sound real. Unless you really have it or know someone intimately with one. What’s more they all really do feel like a close group of friends and have great chemistry together. Casting the adult versions in the sequel is going to be challenging.

With any horror film there are two main questions, is it scary and is it still a good film? I feel as though many horror fans forget about the second part, but lets go through both anyway. First, is it scary? I found it to be more exciting than really frightening. It’s the kind of horror film you want to see with a big audience. But there are also no lasting feelings of fear at least for me. I’m not scared by most horror films honestly. I would have liked some more slow burn scenes, but and at times it feels as though each horror scene is too close to the other. Still for younger viewers who just want scares and chances to get shocked it delivers well enough.
More importantly though this is a good movie in and of itself. I was getting that impression from some of the later trailers which was fine by me. Like I said earlier where the film really shines is in how it tells it story and the characters. This never looses sight of the fact that this is a tale of kids overcoming their childhood fears and that’s the most important part of the story. A large part of that has to do with how well cast the Losers Club is. Even the bullies are given some dimension and especially for a Stephen King story that’s rare. In just one scene they fully explain why the main bully is the way he is and they even tie nicely into the overall theme of fear itself. There are a lot of great moments like that, like an early one involving Beverly cutting her hair is so unbelievably well-done. Like they could come from some other great drama film. It has echoes of “Stand By Me” which makes sense in the group dynamic, but also in the film’s humanity.
Speaking of the group dynamic this film uses humor extremely effectively. I remember watching the MTV trailer with the kids about to go into the sewers and their stopped by a comedy routine of them arguing about sewer water. Watching that out of context made me worried that the film was just going to stop randomly and change tones in a bad way. Well I was relieved to see them in the full context of the story often helped the horror and drama, never detracted. Special props go to Finn Wolfhard as Richie the comedy relief of the group. Not only does he have very good comedic timing and chemistry with the others, but even though he’s in “Stranger Things” which has a very Stephen King vibe to it he completely slips into this very different character. I really wasn’t thinking much about “Stranger Things” while watching which was great. Also, the score is very good and nicely old-fashioned sounding at times. 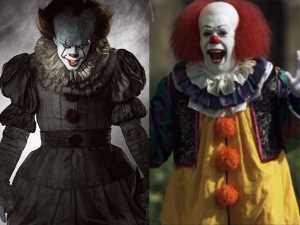 “We all float down here!”

The main event, Bill Skarsgård as Pennywise. How does he stack up to Tim Curry’s iconic performance. All in all I still prefer Curry, but Bill still does a respectable job. For those wondering they do cut out Pennywise’s origin and the overt connections to the greater Stephen King connected universe. They did that in the miniseries too, but one of the great things about Tim Curry was if you know what IT is you can see it in Curry’s performance. He never mentions that he’s a Lovecraftian creature that existed long before the universe was created that’s practically a God of fear, but there’s something about the way Tim Curry carries himself in the miniseries that makes it clear he is something more that just a monster trying to eat kids. I never quite got that same sense from Bill’s performance. Also, while my attention was always squarely on him whenever he was on screen it wasn’t like a truly mesmerizing performance where I couldn’t take my eyes off him. I realize that I may be coming off as though I didn’t like his performance which couldn’t be further from the truth. Bill Skarsgård is very good as old Bob Gray. I hear the kids were terrified of him on set filming their scenes together and I can see it. It just didn’t quite have that effect on me. I’m now even more curious to see what Will Poulter’s performance would have been.

I was able to walk through my dark house just fine when I got home after the movie. So on the one hand it doesn’t have that “oh I need to rewatch this again to see if I can handle it” vibe. Still with all that being said… ya I am planning to see it again. If no other reason than I want to support it and get a sequel to cover the other half of the book.

While fans of the book may be bothered by some of the omissions and changes I think we now have a definitive version of this story. It may not be the scariest film, but it nails the human drama of the kids. It tells a great story of a group of outsiders finding the strength in themselves to go up against a Lovecraftian monster. For any film (even horror) if I have to pick one thing for it to get right over the other I'm always going to pick the drama and characters. Fear while watching a film WILL eventually fade on repeat viewings, but a well-told story will continue to last. See you for Chapter 2. I give it 4 stars out of 5.