In a futuristic city where violence runs rampant, the police have been given the authority to act as judge, jury, and executioner. Judge Dredd (Karl Urban) is one of the most fierce officers and when taking a new trainee on a mission to take down drug lords, they find themselves in a world of trouble. Now with its release in 4K, “Dredd” is now better than ever.

With so many reboots saturating the film market, reviews seemingly incorporate some sort of comparitive analysis of a film’s predecessor. When it comes to “Dredd” it’s not so much a retelling of the story as it is a reimagining with an entirely new character. The original Sylvester Stallone film (“Judge Dredd”) was lacking when it came to performances and story. Even though Stallone is considered a top-tier action star, as Judge Dredd his performance felt more generic. Alternatively, Karl Urban triumphs in the role bringing the character from the pages of the comic book to the big screen with his stoic presence and ferocity in battle. “Dredd” also promotes a more dystopian future and this setting provides a more applicable environment to showcase the lawless nature of this society and necessity for judges.

The rift established between the judges and criminals is fluidly created with Lena Headey and Karl Urban. While Headey is known more for her “Game of Thrones” role as a high society villain, “Dredd” takes that internal, maniacal nature external creating a relentless and fearless foe to Dredd. Karl Urban counters these traits in a “fight fire with fire” situation as his own portrayal of Dredd lacks empathy despite being the hero of the film. While Urban is physically more intimidating,
Headey makes up for it with her tenacious wit and criminal resources that makes her a more than adequate villain. The confined setting within the building complex further supplements Dredd’s own struggle to survive this villains wraith.

The intimacy of the fight sequences are also enhanced due to this closed environment. There are a few “gimmicky” slow motion moments obviously intended for 3D viewing, but they don’t take away from the film. There’s a seamless implementation of these moments much like the sequences in Frank Miller’s “300.” Incoporating these moments into the film’s plot through the use of the “SLO-MO” drug provides even stronger integration. In 4K, these moments are enhanced further with an amplified color gamut and stronger contrasting elements. The most notable change is during the film’s opening showing criminals using the drug in the car and its effects. Many of these scenes feel exaggerated but “Dredd” being a pure action flick provides a bit more leniency due to the genre.

Overall there are strong performances from both Karl Urban and Lena Headey that lend themselves well to a story that captures the essence of the “Judge Dredd” comic books. As a standalone action film, there are some flaws in regards to some action sequences, but the pace of the film fits well into its genre. 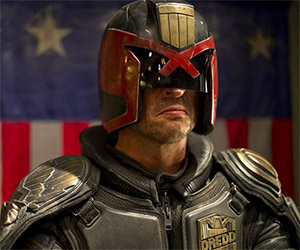 With “Dredd” there is little hesitation. Once the film starts it’s a fast paced journey to the most climactic moments in the film which are handled in a meticulously engaging fashion. This film is driven by entertainment first and foremost and is heavily reliant upon its action sequences. There is little time spent on character origins which provides even more time for the crowd pleaser scenes.

For the fans of Judge Dredd, Karl Urban captures the essence of the character despite having little development. For those unfamiliar with the character, his most basic qualities are conveyed through Urban’s performance simply relegating Judge Dredd to being a hardened powerhouse.

Action junkies will easily fall in love with “Dredd” and general audiences should be entertained in one way or another.

As with many high octane action films, “Dredd” is an experience that can be relived many times. Karl Urban is the perfect embodiment of the character and this film had me longing for a sequel.

As a vast improvement over the original, "Dredd" looks even better in 4K. There is a elegant simplicity to the film overall, but the high octane action will keep you wanting more and revisiting the film quite often.