So, I’m sure you have heard that Columbia Pictures will be releasing “Sinister Six, a foe-centric flick, ahead of the next Spider-Man movie. I’m also sure that some of you are wondering, who in the hell are the “Sinister Six?” Well, allow me to explain why this is a great thing for the Marvel film universe.

First things first. Who are they and how did they come to be. In his 52 years of crime-fighting, Spider-Man has amassed countless enemies and put almost all of them behind bars. The abilities and villainy may vary from foe to foe, but the one constant is their distaste for the meddling web-head.

The story goes that upon escaping prison and wanting to exact revenge against Spider-Man, the person who put them there in the first place, Doctor Octopus organizes a motley crew comprised of six of the wall-crawlers mightiest former foes. 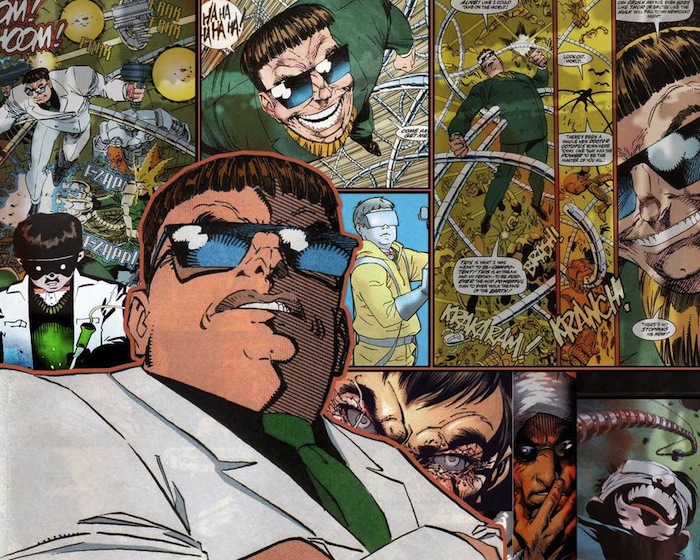 Doctor Octopus, Doc Ock for short, has been a long-standing disruptor of the peace.  He wasn’t always such a bad guy. At one time Dr. Otto Octavius was working for the U.S. Atomic Research Center. It was in the course of researching radioactive substances when Octavius first constructed his signature chest harness with the four mechanical and tentacle like arms. Although initially used to aide his legitimate research, It was the wearing of this apparatus that ultimately led to him being called Doctor Octopus. To make a long story short, Otto’s metamorphosis was a result of  the passing of his overbearing mother and a lost love. This clouded his mind leaving him unable to focus. Gripped by guilt, Otto loses his concentration and volatile liquids explode, bombarding the scientist with radiation. The substances left him capable of mentally controlling the arms, but the accident also caused irreversible brain damage, ultimately turning the respected scientist into the megalomaniacal and tentacled super-criminal we know today. 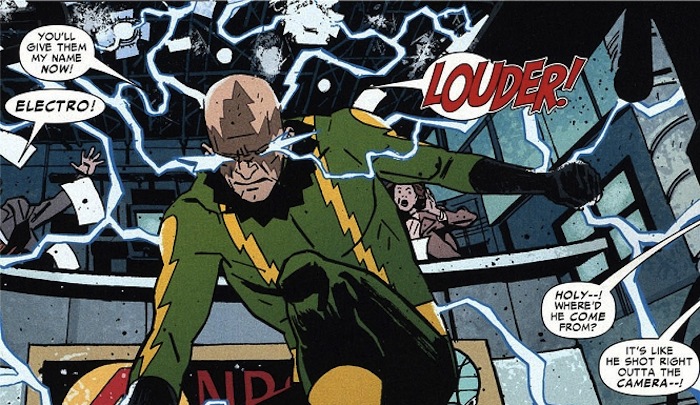 Dillon, like Octavius, was a product of being raised in less than desirable environment. Having a mother who continuously told him that he would never be good enough, Dillon scrapped his aspirations of becoming an electrical engineer to instead reluctantly take a job as a lineman for an electric company.  During a routine repair to a power line that was still connected to its spool,  Dillon was struck by lightning. The bolt that should have cooked him to a crisp instead caused a change in his nervous system, allowing him to generate and manipulate seemingly limitless amounts of electricity. Perhaps due to his abundance of mommy issues,  Dillon embraced his newly bestowed abilities and turned to a life of crime as Electro. I am guessing that by this point, you are noticing some major differences between the original comic Max Dillon and Jamie Fox’s Ultimate rendition of the juiced up villain.

This one is pretty straight forward. Kravinoff is an obsessed big game hunter who is on an un-ending quest to prove he is the world’s greatest hunter. Cue Spider-Man. Given his penchant for punishing criminals, the web-head attracted the attention of Kravinoff, who saw him as an adversary that must be bested in his pursuit for greatness. Oh yeah, and aside from being a master hunter who has disdain for all projectile weaponry (until he doesn’t), Kraven uses his bare hands to take ‘em down. As if he wasn’t already lethal enough, Kraven  has also been know to use a serum that gives him comparable strength and agility to that of Spider-Man himself. 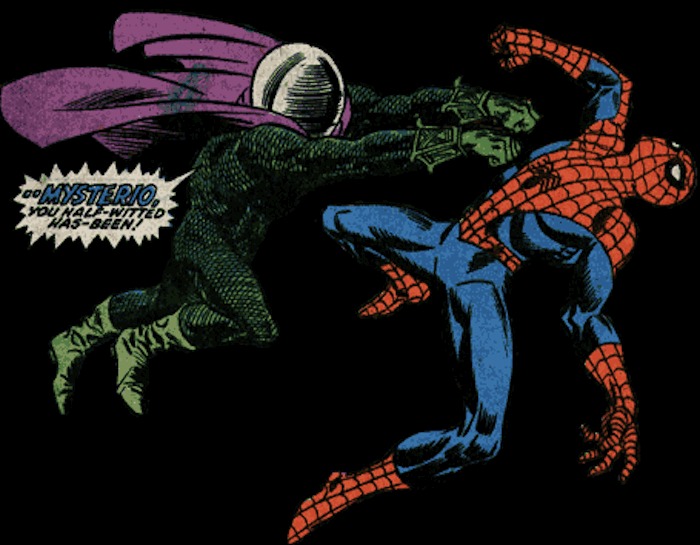 Upon being gifted an old movie camera by his uncle, Beck found his niche, ultimately becoming a successful Hollywood stuntman and special effects designer. Like any soon-to-be-villain, Beck’s ego was his fatal flaw. Deciding that he was not getting the recognition he deserved, he sets forth on a path which leads him to becoming Mysterio. After a few military base break ins and  a short stint masquerading as a crime-committing Spider-Man, his ego gripped him once again. Although he donned the glass dome helmet and purple cape to defeat the wall-crawler, his arrogance allowed Spider-Man to record his incriminating rants on masterminding the dupe. With the recordings, Spider-Man was able to clear his name and foil beck. Crime NEVER pays, unless it does. 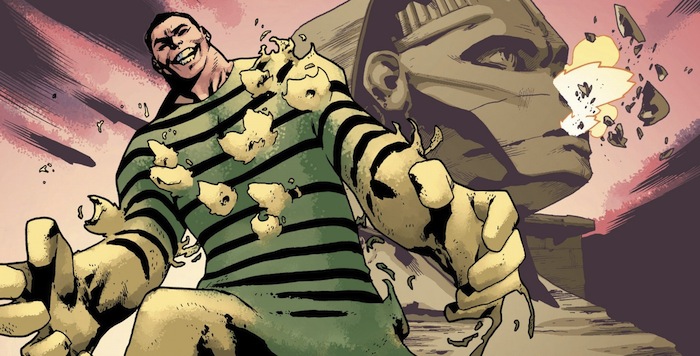 Born into an unsavory neighborhood only to be abandoned by his father by the age of three, William Baker stole, swindled and cheated his way through his early years. Is anybody else noticing a connection between childhood environment and villainy? The young and racketeering gang member, took on the alias of Flint Marko and slowly became a successful player in the criminal underworld. After being sent to Ryker’s maximum security wing  for commiting a city-wide crime spree, Marko escaped through an un-guarded drainage duct and fled to Georgia. In hot pursuit by the FBI, Marko found solace at an atomic testing site near Savannah. As he rested on a nearby beach, the experimental reactor’s system exploded, exposing him to a massive dose of radiation, fusing his body with the sand. Upon awakening, Marko discovered his new found powers to reshape his sand-like body at will. Sandman was Born. 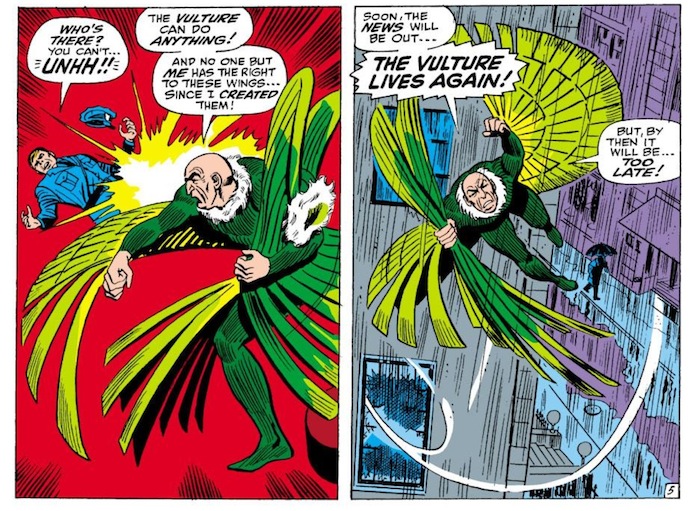 Adrian Toomes is a one-time electronics engineer who employs a specially designed harness, of his own making, that gives him the ability of flight and enhanced strength. Although Toomes is quite old, and I mean old, he is nonetheless spry and remorseless killer. From time to time Toomes has devised strategies to restore his youth through biochemical means and, at one point, by using a device to steal Spider-Man’s youth. These ventures were only temporarily effective, ultimately reverting Toomes to the old frail man he so desperately is trying to escape being.

There it is. The half-dozen foes that comprise the kill Spider-Man club. So, why is this good for the Marvel film universe? For one, this is breaking the norm of releasing Spidey related films during the summer months, testing the market outside of the blockbuster season. More importantly, imagine the more true to comic stories Marvel will be able to depict by using a shotgun approach of introducing characters. Moves like this, if played right, could potentially feed into other franchises creating cross-over series. Marvel has faced the challenge of having dispersed character rights to conflicting production companies, but once those companies see the viability of the concept (i.e. the profitability) they are more likely to make arrangements to permit such a cross-over.

Can you imagine a few of the sinister six escaping prison only to be put back by the Avengers? Or, could you see Spidey himself make an appearance on the Avenger’s back up squad? I know I am getting WAY ahead of myself, but as the comic enthusiast that I am, how could I not!?