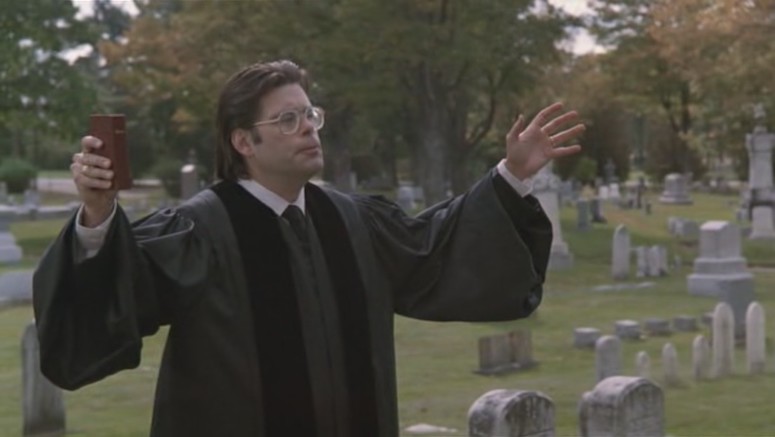 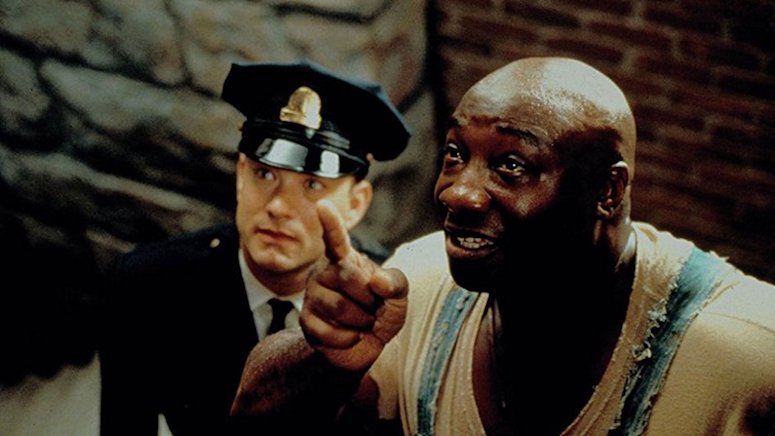 I’m one of those weird people who likes “Casino” more than “Goodfellas.” This is a similar case where I like “The Green Mile” more than “The Shawshank Redemption.” I’ll agree there’s probably a reason most like “Shawshank” more than this, but there’s just something about “The Green Mile” that hits me more. It’s a darker film and deals with more standard King type themes that he likes to explore. This has 2 of King’s best villains, we have Sam Rockwell as Wild Bill who is funny. However, if you’ve seen the movie then you know the twist with his character and you’d think that would make re-watching this movie difficult yet amazingly it doesn’t. The other is Percy who may technically not be as bad as the serial child murder/rapist, but I kind of hate him more. First of all they seemed to pick the actor with one of the most punchable faces ever. He’s just one of the biggest jerks ever in a movie and he’s all too real. He has connections and uses them to do what he wants. Every metaphorical egg thrown in his face makes me want to stand up a cheer.

I hear in the book Tom Hanks’ character ends up in a nursing home with an orderly very similar to Percy, which is what causes him to flashback for the story. That seems like an unbelievably cruel fate, almost as bad as the death of Delacroix. Now I know he’s a death row inmate and while writing this article I even looked up what his crimes were in the book and they do paint him in a somewhat different light. That being said his execution is still one of the most disturbing, shocking (no pun intended) deaths ever put on film. At times it almost feels like having witnessed a real murder and having the screams stuck in your head. I’m INCREDIBLY against the death penalty to begin with, but even leaving that aside I fail to see how someone can watch it and not come away feeling that no one should have a death that gruesome. The thing is that this is based on the research King did for the book about the electric chair and how so many of them went wrong like that.

Moving on to something a bit lighter. John Coffey is another one of King’s great creations. He’s so known for his characters like Pennywise, Randall Flagg and the Crimson King that exemplify evil. So it’s interesting to see him tackle the opposite. The only other character quite like this in terms of how good they are would be Mother Abagail. It’s not hard to miss the Jesus metaphors. However, it goes even further and really drives home how painful that life must be even if you have the powers and goodness of Coffey. One of the most poignant lines about life comes from this film with “Mostly I’m tired of people being ugly to each other. I’m tired of all the pain I feel and hear in the world everyday. There’s too much of it.” Another thing I like about this movie is how this was the director’s big follow-up to “The Shawshank Redemption.” He was understandably hesitant to take on a story that had so many surface similarities. The film however never feels that way, you’re not sitting there waiting for Red to show up. This is its own living word. Wow, this entry was long! I guess I can say it reflects how long of a movie it is. 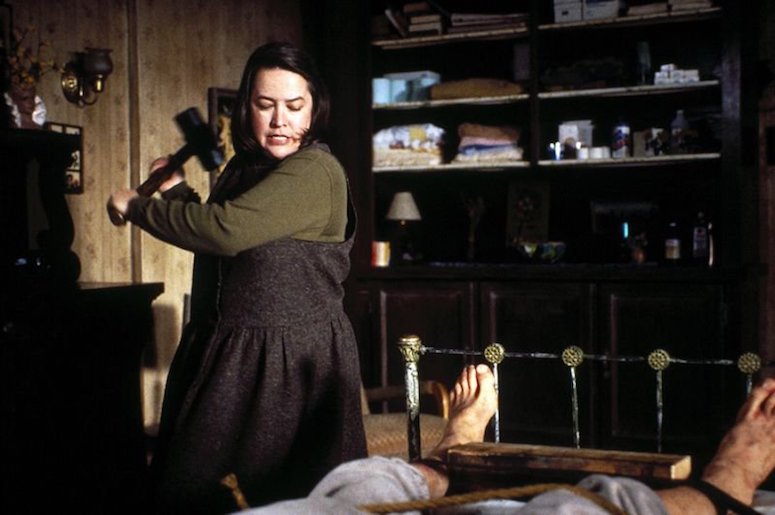 This film is so loved by me and my friends that it seems like we’re constantly posting GIFs to each other’s timeline. Such a simple idea that came from what must have been one of the most horrifying moments of his life. A fan broke into King’s house and tried to hold his wife hostage so he could meet his favorite author. Luckily King was gone at the time and Tabitha was able to escape. This is one of those adaptations that I understand to be quite faithful except for a few parts. But even then those parts honestly sound like improvements. Let’s talk about the famous hobbling scene. In the book she cuts off his feet and burns the stubs so he doesn’t die. This apparently was the scene that got the movie made. Yet, when it came time they changed it something much less gory and created something far more disturbing. She breaks his ankles with a sledgehammer. You no doubt started to cringe at imagining that. Believe me, it is as disturbing as it sounds even though we only see one foot. The other one happens off-screen. No matter how many times I watch it continues to hurt.

I included Annie Wilkes on my list of Scariest Characters in Film/TV so I won’t repeat myself. If you don’t feel the need to click on the link then I’ll summarize. Everything you’ve heard about how good her performance is true. I’ll go over the other main performance, James Caan. I like him as an actor alright, but despite how big of a star he was when he was younger I wouldn’t call him a great actor. He’s typically just not the kind to fully immerse himself into a role. However, it really works for the character. He’s quite good at being able to communicate all of his fear and frustrations into just his expressions. It’s a wonderful counterpoint to Bates. We also even have an added subplot with the Sheriff trying to find him. You wouldn’t think these scenes with their emphasis on comedy would fit, but man do the actors bring it to life while Reiner never lets it completely take over. It’s a film that’s almost fun in how dark and suspenseful it all is. Well done Mr Reiner, you’re 2 for 2 with King. If he ever wants to try a third one I’d love to see how it would turn out. 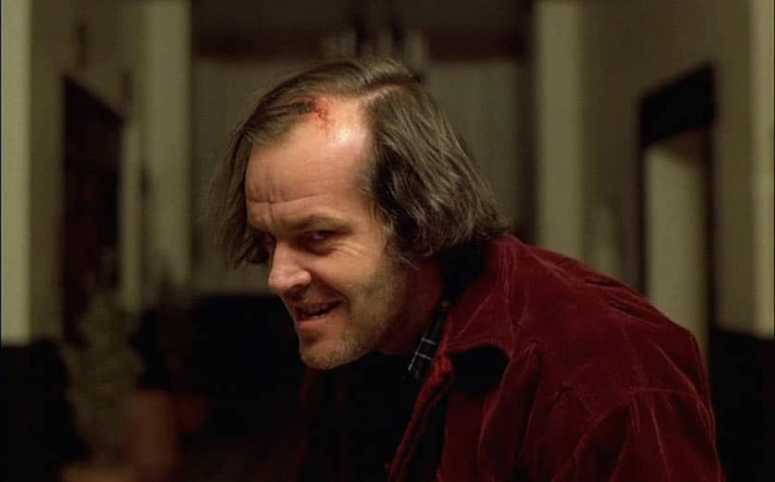 This is my favorite Stanley Kubrick film. There are some that are technically better like “A Clockwork Orange” and such, but on a pure emotional level this is the film of his that I love the most. Now before we move forward let’s discuss one of the most well-known aspects, the fact that Stephen King himself hated the film. So much so that he later remade it as a miniseries that was truer to the book, but most would agree is far inferior in… basically every other department. Here’s the thing though, I get why King hates the film so. I haven’t read the book, but I know enough about the story and King’s personal life to know that it’s a very personal story for him. Some parts are even very autobiographical. So when a story is that close to yourself it’s hard to see someone else change it in pretty fundamental ways.

Jack Nicholson’s Jack Torrence never seems like a truly good man at the beginning. He doesn’t even seem to really like his family. But an added bonus of that is that helps add to the mystery of is Jack going crazy from cabin fever or are the ghosts real and possessing him? What can be said about Jack Nicholson is that he’s perfect in every scene. In my opinion, the scariest scene is actually when Danny goes into the room to get a toy and finds his dad sitting on the bed. It’s a really simple scene of the two just talking, but man is it creepy. There is a real palpable sense of evil as his father and son talk. This is a role people often point out Nicholson’s over-the-topness, but he’s quite subtly unnerving in this scene. Another thing that is often criticized is Shelley Duvall’s performance. Some say it’s too panicky and like a doormat. I actually think that works better than if she was stronger. You have to believe that Wendy would stay with Jack for so long. Also, it makes her eventual triumph all that more inspirational to see her make a last stand against her husband in the infamous “Here’s Johnny!” scene. That having been said Kubrick’s treatment of her during filming was completely uncalled for.

What do you think? Which Stephen King films are your favorite?