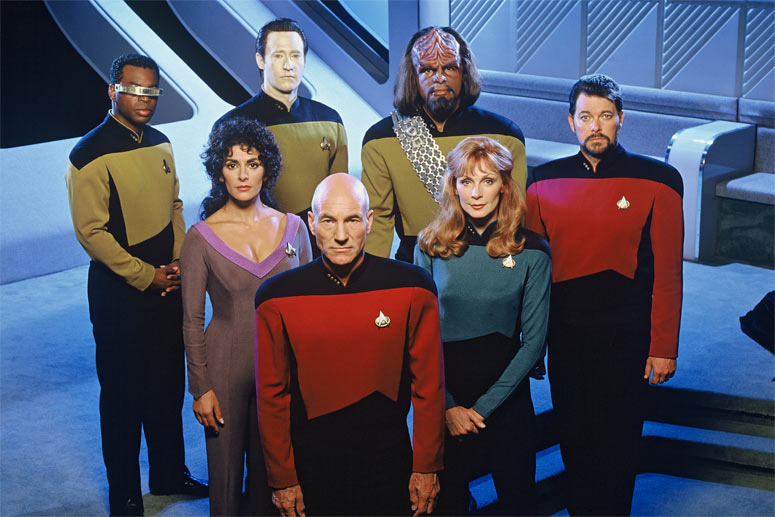 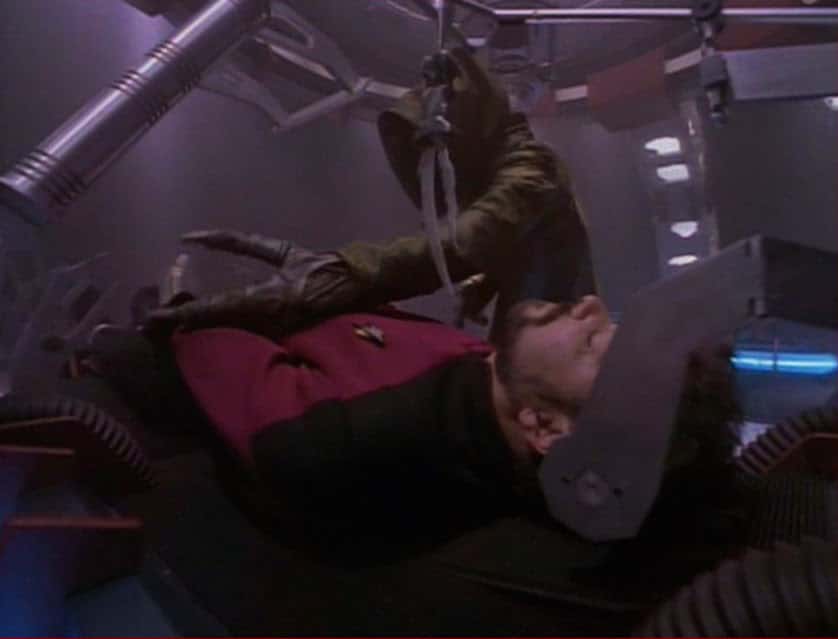 Perhaps Aliens isn’t even the right word. Maybe extra-dimensional beings? This episode almost feels more like a “Twilight Zone” episode. It begins with many of the crew members feeling exhausted even though they get a full night’s sleep. These same crew members seem to have curiously similar themes and images in their dreams. And it only seems to be getting worse which each passing day with sign of procedures having been performed on them seemingly over night. Then, it turns out some of them are actually being abducted by… something. So that’s one interesting aspect of the episode, it’s essentially an alien abduction story IN THE FUTURE. Probably the most famous scene is where they use the holodeck to slowly build the environment they’re being taken to while they sleep. They form a plan to let Commander Riker get taken while they’re monitoring them and he tries to rescue one of the other crew members who were also taken. It turns out they are inter-dimensional beings that exist outside of our dimension. Whatever they are, they’re not from our plan of existence and are perfectly fine with kidnapping us into their dimension when we sleep to perform strange experiments seemingly for no discernible reason. Have fun sleeping tonight.

Now with the recent popularity of “Stranger Things” this may sound like pandering, but I honestly have always had an interest in these kinds of stories about other dimensions. Beyond the creepy thought of their actions, there seems to be no reason, or no malice. Whatever they think of us they clearly don’t think anything of taking us like this to do whatever experiments they feel like doing. I mean one of the experiments was apparently cutting off Riker’s arm and then reattaching it. Something that is that cold and unfeeling is truly frightening. Something interesting is that they don’t really defeat them. They escape and manage to close the portal the aliens were using to kidnap people. Meaning if they did it once they could break into our world again. But they didn’t. Like the Bluegill I immediately tried to find out if there were any other episodes following up on this threat but sadly no. It’s sad the production team was disappointed with how this episode came out, especially with the Alien’s design. While it’s true they aren’t the scariest or original designs around, the buildup and threat they posed more than made up for it. Personally I really want to know what was their plan? Did they realize they were experimenting on sentient life? Do they even perceive the universe like we do? I mean come on, the show would later bring back a giant snowflake, why not these guys?

1.) What is the history between Guinan and Q?

One of the most interesting characters created for the show was Q. A being from a species that are all called Q. They all basically have the powers of God and are completely omnipotent. Meaning if the mood struck Q he could snap his fingers and you’d ceased to be. Luckily for all of us he’s interested in humanity. It depends on the appearance as to how that takes shape. Sometimes (and my favorite is when) he’s seemingly just there to annoy the ship, but has actually come to help/teach us something important. Sometimes he’s there as an agent of the Q Collective to try to keep us in line (mostly his early appearances). Then there are his magical imp episodes. Basically it’s like the first option, only there’s no point (through either design or poor writing). He’s just setting these events into motion because he’s bored and can literally do anything he wants and nothing can stop him. The heroes’ only chance is to win the game he wants to play. Now while that may not be the most nuanced version of the character, it is an interesting writing challenge. How can you stop something that has the powers of a God? Like it or not it is the iconic view of Q and even the actor John de Lancie has been playing variations on this kind of character ever since.

Another really interesting character was Guinan as played by Whoopie Goldberg. As she was the A-list star of the cast, they could only afford to have her occasionally on the show. She was the bartender in Ten Forward so when she wasn’t seen in an episode, it was easy to imagine she was just busy doing other stuff. For some episodes it may have been as simple as a quick cameo or to dispense some wisdom. Every now and then she’d actually be a major part of the plot. Despite all of that I actually couldn’t tell much about her, or at least about her past. It was shrouded in mystery. We know she’s an alien and the nickname for her species is “the listeners.” They’re VERY long-lived, most were wiped out by the Borg, and her father has some great influence. Whenever they’d begin to reveal a little more about her, the plot would normally kick into gear and force them to table the matter for later. She also apparently has no alien powers. The only other one of her species we ever met was Soran from “Star Trek: Generations” who never demonstrates any extra powers.

Now why that’s important is that it comes into play in the episode “Q Who” where Q makes his 3rd appearance and we know how dangerous/powerful he is. What gets him not only angry, but ready for attack? The site of Guinan. All we learn is that they’ve “had some dealings.” Besides their reactions to each other, we know they don’t have fond feelings for each other. In a later episode when Q becomes human, Guinan takes the opportunity to stab him in the hand to see if he’s really human. Now that may seem petty to some, but remember we have no idea what happened between them before. Did Q deserve it? Probably, but something really fascinating to me that you can easily miss while watching in “Q Who” is when they’re staring each other down, Q looks ready to blink her out of existence which begs the question why doesn’t he just do it? We see Guinan raise her hands in a way to indicate that she has some sort of defense mechanism against Q. She apparently has some way of defending herself against a God. Now there have been other aliens like the Metrons and Douwds that I think could defend themselves with their powers (though I always got the impression the Q are supposed to be at the top of the power food chain) but Guinan? What can she do? Picard breaks up the fight before we get a chance to find out.

So that’s one mystery I want to know, but more specifically I want to know their past. Now here’s the most interesting exchange between them. Q upon seeing her says, “This creature is not what she appears to be. She’s an imp and where she goes trouble always follows.” Picard dismisses Q almost instantly as he’s known her for a long time (though we never get any details) but remember we the audience know next to nothing about her even at the end of 7 seasons. So what if Q is right? We see her do nothing, but be helpful in the show. Although, there’s always that air of mystery surrounding her. Not so much at this point in the series, but Q eventually comes to care for humanity and wants to see it reach its full potential. What if we had it backwards all this time with who’s the trustworthy one and who isn’t? Like with all the previous entries, it feels like there are tons of story opportunities there. And if “Star Trek Discovery” is to be a prequel series, it would be awesome if they finally gave us some closure on this.

What do you think? What mysteries are you still wondering about in Star Trek? Do you know the answers to any on the list, comment if so.