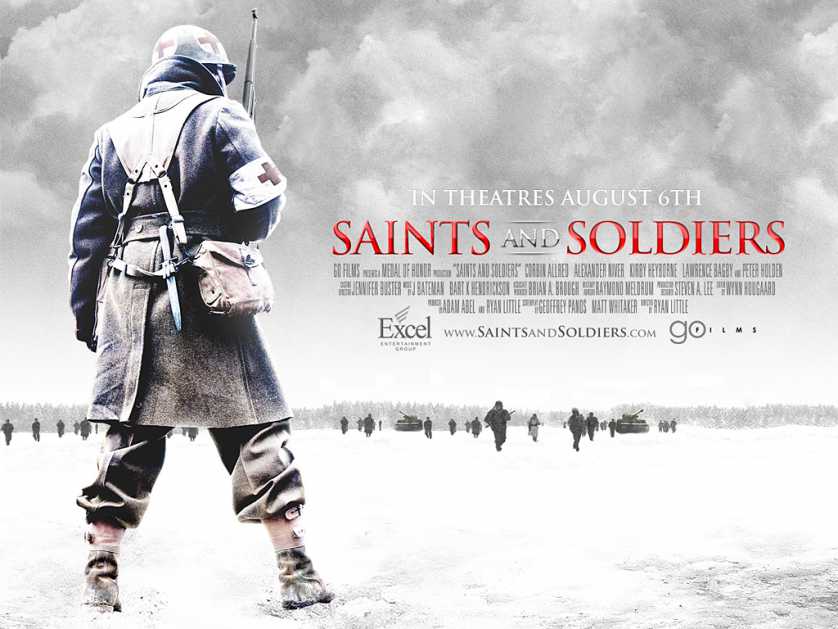 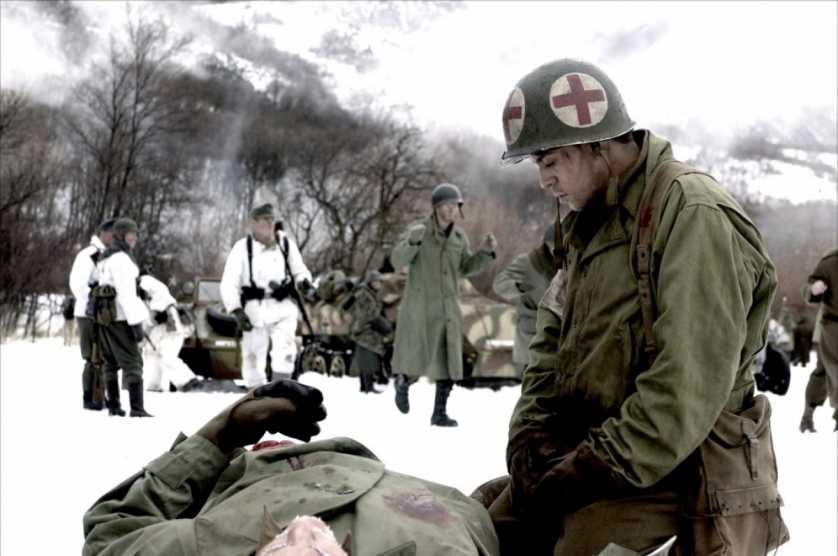 “Saints and Soliders” was released back in 2003, and it has been sitting in my Netflix queue ever since the service launched. My finger did itch a few times over the years whenever I ran across this film. But, in the end, I was just never in the mood for a World War II drama… and yet I’ve watched “Saving Private Ryan” and “Band Of Brothers” countless times over the years.

It doesn’t matter now though. I sat through this two-hour World War II drama, and my basic critique: it’s “just okay.”

There was some really nice work done here. The plot is pretty strong, and it has some set-ups that are truly satisfying after their payoffs late in the film. Everything within the mise-en-scene felt authentic, so that’s a major plus for any World War II drama. The subplots kept the underbelly of this film alive, especially with some decent banter between the characters. And finally, every single one of the characters’ arcs were completed in excellent, visual fashion that could be used as examples in screenwriting courses.

With everything I said above, it seems like this film was on its way to being a box office hit or cult favorite. But, there were too many little elements that didn’t work for the film. One of them being the favored steadicam technique, which has plagued films since the Jason Bourne franchise made it popular. Sure, it works during the firefights and skirmishes, but it’s really unnecessary throughout the rest of the film. This technique doesn’t help make it more authentic or tension-filled. It only makes the film give you a headache, especially when the characters are just sitting around doing nothing.

Another area I had a problem with was about 50 percent of the film’s soundtrack. There were moments, especially during the comic relief scenes, where some cliché Western-style music would be playing. It totally didn’t fit the genre and took you away from the “immersion factor.” I had to rewind the film a few times just to make sure I was hearing it correctly, and sadly I was. 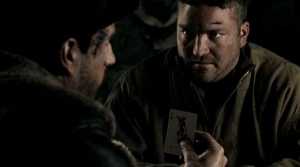 Every war film and serious drama needs comedic relief, mainly so the audience’s emotions aren’t weighed down too much. Yet, the way it’s done in “Saints and Soldiers” is almost too goofy for a war film. One scene in particular tries too hard to be funny. The scene involves the “dumb” character, Shirl, checking the status of an abandoned shack. His actions and the editing totally contradict the well-established serious tone of the film. There are a few more awkward comedic moments like this, but they do get better after most of the comedy transitions into banter between Shirl and the British soldier, Winley.

Add in some boring and cliché dialogue throughout the film, and you’ve got what disappointed me the most. I can’t even blame the actors. They did the best they could with the material they were given, and their talent does shine late in the film. You’ll just have to trek through the laughable dialogue in order to get there.

The plot, characters, and universe had promise, but the comic relief, soundtrack, and cliché dialogue brought a lot of disappointment.

Even with all of the terrible and generic dialogue, I still cared about the characters throughout the film. Some scenes did get a little boring though. The basic plot of the film is: four American soldiers must escort a British agent to safety because he has important information. Now, they are behind enemy lines, which does add a lot of tension, but the tension is drained by the boring scenes I was referring to. The characters progress along their journey, but then they hit a roadblock and sit around for the night. They start back up again, hit more roadblocks on the way, and then a snowstorm causes the characters to sit around for a 45-minute span. Some great character development and plot points occur during this time, but the overall sequence was kind of lackluster. This stop-n-go style was too slow for me. I guess if the content was richer and more in-depth, I wouldn’t mind it so much, but it wasn’t, so I got bored easily.

The subplots did keep me entertained, especially Shirl’s quest for a cigarette, but there were a few missed opportunities for some other great subplots. I’m mainly talking about a love story between Sergeant Gunderson and the woman that’s housing the soldiers during the snowstorm. There’s no attempt at a love story in the film, but I just thought it would’ve helped bring the film to another emotional level. Yet, we do experience some great emotional moments when the woman and her daughter show kindness towards the soldiers. This is ruined after the snowstorm finishes, though. The soldiers just up and leave one morning without saying farewell to the woman who provided them food and shelter. So, all that emotion and great character development was built up for cheap, unsatisfying results. 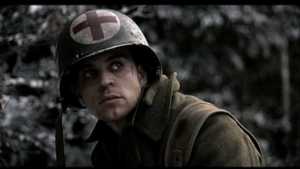 I will admit that the film does get better as it progresses. The relationship between Deacon and Gould develops into an excellent example of brotherhood and camaraderie, making the ending a much sweeter and rewarding experience. Plus, seeing all the characters complete their arcs and seeing all the well-structured payoffs late in the film were truly satisfying. The steadicam technique does work a lot better in the later firefights and skirmishes, but I still think it should’ve been used lightly.

In the end, I was entertained, but there was truly nothing special about this film. This is probably a product of me growing up with greats like “Saving Private Ryan” and “Band of Brothers,” so it’s safe to say that I’m hard to please when it comes to World War II dramas. The film is fine the way it is, but I would’ve liked to see more constant progression towards the goal instead of the stop-n-go style the film inherited.

I have no reason to watch this movie again. It’s “just okay” in my book and has a decent amount of entertainment, but the only reason I’d pull this out again is if I needed good examples of character development for a film or screenwriting course. That’s pretty much it.

“Saints and Soliders” is just okay in my book. Elements like its authenticity, attention to detail, plot structure, and character developments move this film in the right direction. But, the little things hold it back. Cliché and generic dialogue, questionable musical score, bad comic relief, and missed storytelling opportunities leave this one off of my Netflix list. With that said, I still do recommend people watch it. You’ll have a decent time and won’t come away hating it, but you won’t come away loving it either. 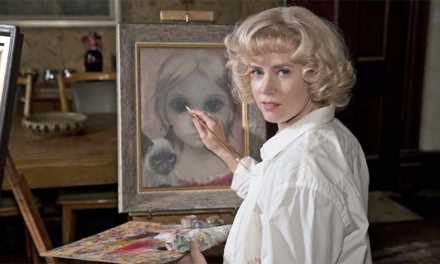