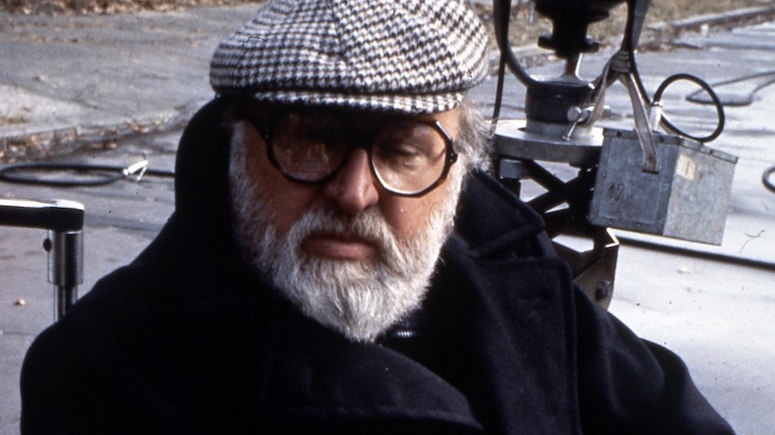 Sergio Leone’s name doesn’t ring the same bells as other masters like Kubrick and Hitchcock, but it should!

I’ve wanted to talk about to Westerns for some time. Although it would be a shame if most of the spots would be taken up by one filmmaker. I figured I go over this and then tackle the westerns after I’m done talking about one of my favorite directors, Sergio Leone. A few SPOILERS ahead.

1.)”The Colossus of Rhodes 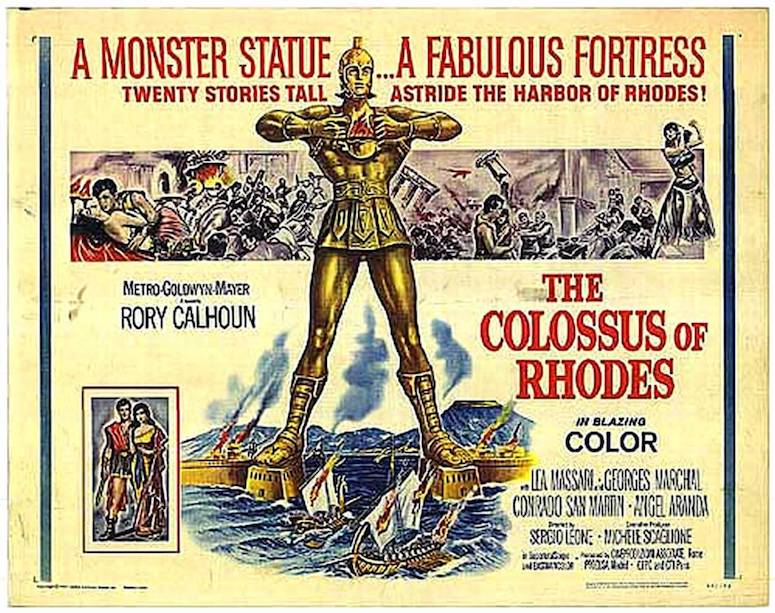 At this point Sergio Leone had worked on some famous movies in Italy. His big break sadly came when the original director of “The Last Days of Pompeii” fell ill. To make sure the film finished on time he stepped in and finished directing it. It gave him a chance to be the official director on his own project, “The Colossus of Rhodes.” Here’s my promise from writer to reader, I will always be honest with you about films I’ve seen. As in I’ll only ever discuss movies I have actually seen from beginning to end. So believe me when I say I can’t remember what happens in this damn movie! It is so dull, so boring. People just stand around on their hind legs and talk about blah-blah-blah! You’d honestly be hard pressed to be able to tell that this is even a Sergio Leone film.

It has NONE of his style or trademarks, Ennio Morricone doesn’t even do the music! You’d have to be a fortune-teller to see the bright future he had as a filmmaker. Still there is ONE thing of note… for me anyway. The lead actor is Rory Calhoun. In “The Simpsons” season 6 episode “A Dozen and One Greyhounds” there’s a joke about Mr Burns seeing a dog stand on its hind legs. Which of course reminds him of “the person who’s always standing and walking”… Rory Calhoun. It’s such a random joke made funnier by the actor’s obscureness. So for a “Simpsons” fan like myself it’s cool to be able to say I’ve seen a Rory Calhoun movie. Plus for some reason it’s just a fun name to say, Rory Calhoun. Ya that’s honestly the most interesting thing I can think to say about this film.

Eric’s Advice: Skip unless you must see all Leone films and obscure Simpsons jokes like me. 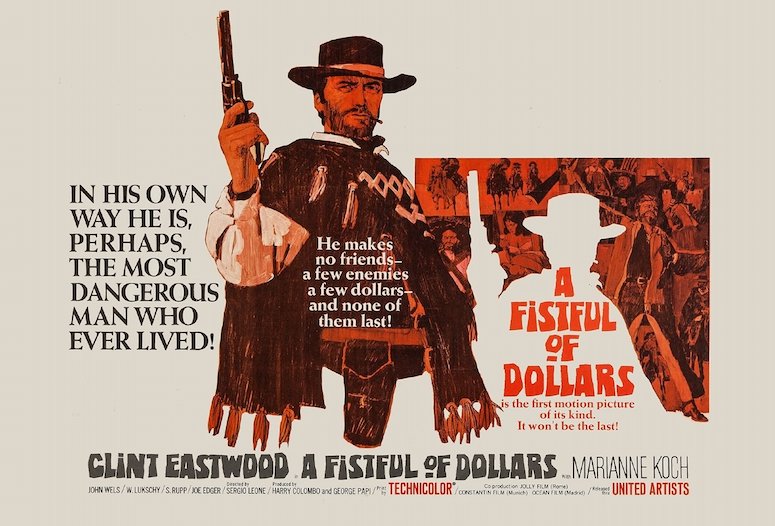 Here’s how filmmaking in Italy worked at this time. As described by Sergio Leone biographer Sir Christopher Frayling, it’s a very stop-go kind of industry. One film comes out and then everyone else rushes to make more of that kind of film. For years the sword and sandal movies were king, hence the first films of Sergio Leone. However, he was actually a bigger fan of westerns from his childhood. He was able to make his own western with “A Fistful of Dollars.” While it’s debatable which is the first spaghetti western, (a western made by/for Italy often in Spain) it is this film that broke the sub-genre into the mainstream. As a result it caused spaghetti westerns to be the default kind of films made in Italy for many years after. It wasn’t enough for them to just start a new trend, but there were unspoken rules in Hollywood westerns like not showing the gun in the same shot as the victim that Leone broke. Partly because he wasn’t aware of the rules. Also, partly because he just didn’t care and wanted to break the mold.

This also began Sergio Leone’s quest to cast his favorite actor Henry Fonda, but instead he got a young Clint Eastwood. His contract with the TV show “Rawhide” wouldn’t let him make movies on his time off… in America. So he jumped at the chance to star in something even if it was such a strange idea. Still it paid off for everyone including Akira Kurosawa. Let me explain, this film is an unofficial remake of “Yojimbo” just done as a western instead of a samurai film. Leone tried to fight this, but had practically no defense so he ended up being the only person not to make money off this film. Instead, Kurosawa got a percentage of the profits and ended making more money from this than he actually ever did for “Yojimbo.” My first exposure to the film was in “Back to the Future Part II.” What’s really weird about that scene aside from slightly editing the footage to move faster to set up “Back to the Future Part III,” they completely redid the music for it too.

Eric’s Advice: See it! Speaking for myself I prefer this to “Yojimbo” probably because I like westerns more than samurai films. 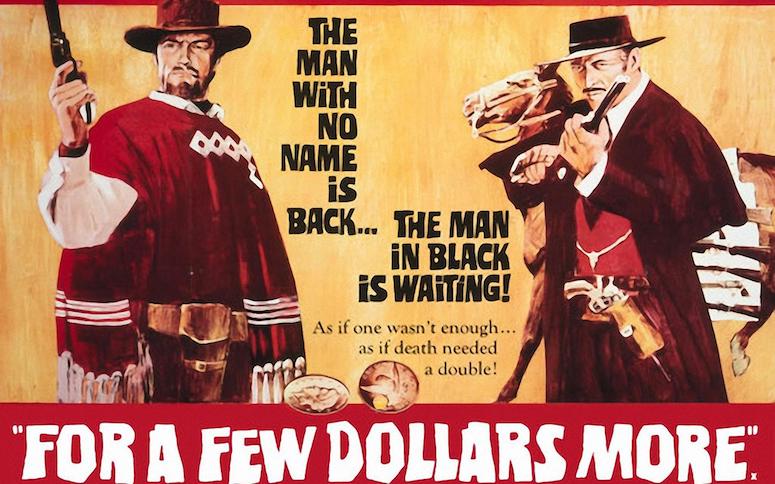 Let me start off by saying that this is probably the best sequel title ever. First, “A Fistful of Dollars” then “For A Few Dollars More.” They just fit together so nicely. However, here’s the weird part it may not even be a sequel. The director Sergio Leone did say that all the films in the Dollars Trilogy aren’t actually related. That’s fine, but I would ask THEN WHY IS THE MAIN CHARACTER IN EACH FILM DRESSED EXACTLY THE SAME AND WITH THE SAME MANNERISMS?! Don’t tell me they were so low-budget they couldn’t afford a new outfit! Each film got a bigger and bigger budget to match Leone’s growing ambitions. Now even though “Yojimbo” did have a sequel “Sanjuro” it did not serve as the basis for this film. It is about two very different bounty hunters coming together to hunt down a criminal. First they start off as adversaries, but over the course of the film come to respect each other.

We can really see Sergio Leone coming into his own as a filmmaker here. Many of his trademarks can be seen in the last film, but here they become more refined. The scenes are a little longer paced and the principle of “wait, then pay-off” really begins here. Again, Leone tried casting Henry Fonda in a role, (Col. Mortimer) but again had to settle for another actor. Luckily they got Lee Van Cleef who is an awesome character actor finally getting a chance to play a major character. The villain (played by the same actor (although different character) from the last film) is a little more interesting. Although the depiction of marijuana is just silly. You may not hear as many people talking about this film, but it has references in other films like with the chiming watch in the “Pirates of Caribbean” sequels which itself is a reference to “The Bravados.” 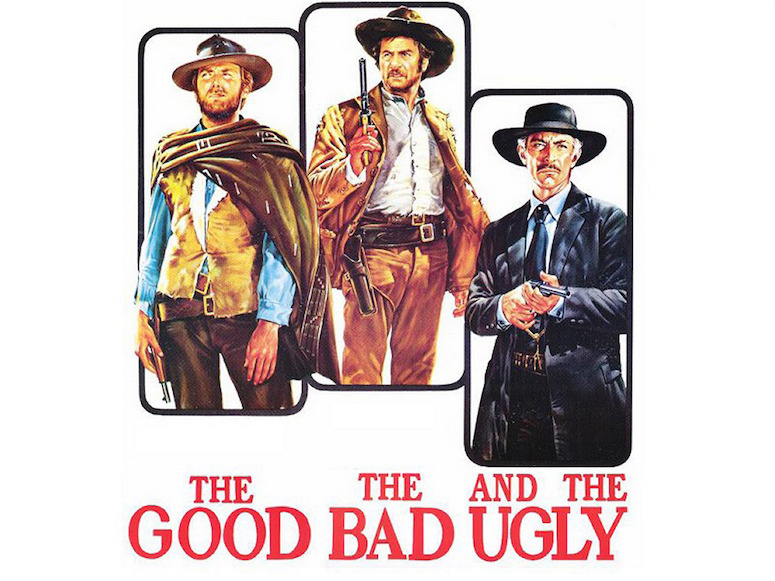 This is not only MY FAVORITE WESTERN OF ALL-TIME, but it’s also #4 on my list of personal favorite movies. I love this movie! This is where it all comes together. The actors, the music and style it all flows together so perfectly. This is Ennio Morricone’s greatest masterpiece. The theme is probably the best western main theme ever. I particularly like the track Ecstasy of Gold. Clint Eastwood returns as the Good (Blondie) although the funny thing is that this is the darkest we’ve ever seen this character before. Lee Van Cleef returns as well now playing the Bad (Angel Eyes) with one of the greatest villain introductions ever. And the new piece of the puzzle, Eli Wallach as the Ugly (Tuco). He’s oddly enough the heart of the film. He’s immoral, but there’s just something charming and unpredictable about him. Their chemistry is great and they work so well off each other. The visuals are some of the best it was so hard deciding through all the shots what to pick. I’d gladly hang so many of them on my wall like a painting.

So where does this fit in The Man With No Name trilogy (the dollars trilogy)? Well first let’s explore that alternate name for these films. The Man With No Name is a marketing gimmick made up by United Artist, the studio that released these films in the US. It’s not terribly accurate as Clint Eastwood has a name in each film. Although with each one you could argue they’re just nicknames and not his real name. If you like myself prefer to think of these as one continuous story then this would be the prequel. We see Eastwood’s character slowly assemble his iconic outfit throughout the film. There’s also the fact that this takes place during the Civil War, which is generally considered the era right BEFORE the time of the cowboys. It has some references to real history, but still takes great liberties. The battles are modeled more off of War World I battles with the trench warfare. It’s cool and unique looking in a Civil War context, but not accurate for history buffs. Still that’s not why you watch this sort of film. You watch to see three badass actors try to take the buried treasure first. The tagline sums it up perfectly,”For 3 Men The Civil War Wasn’t Hell. It Was Practice!”

Eric’s Advice: Do I even have to say anything? Ya big shock Eric highly suggests that you watch what he considers to be the greatest western ever.